Barbara Tuchman wrote:  "Nothing sickens me more than the closed door of a library."  I certainly empathize with her feelings, but I would also add "...or the closed door of a community museum."  Doing the research for Isaac's book has made me appreciate small town museums kept functioning by dedicated volunteers, generous donors, and poorly paid administrators.  I want to use my blog to recognize some of the people and places where I have done and continue to do my research. 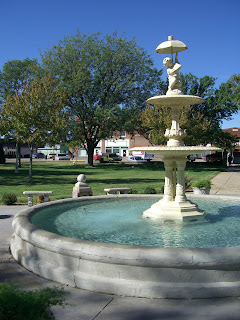 I'll begin in the town of St. John, Kansas, home of the Lucille M. Hall Museum where Isaac's Journal was found and the county seat where Isaac banked, shopped, proved up his claim, and attended farmers' meetings.  The heart of the town is a beautiful, shaded park with the sidewalks from four sides meeting at a fountain in the center.  Lucille deeded a landmark 1910 building on the west side of the square, known as the Tudor Building, for the museum.  It can be seen in the distance, just to the left of the fountain in the picture above.  In his journal, Isaac mentioned settling up his grocery account with Tudor & Ring, but that was twenty years before the 1910 Tudor building was constructed.
The Museum Board has added improvements, such as rest rooms, an elevator, and an impressive kitchen, so that the building can be used not only to showcase the collections but also to serve as a place for community events, such as wedding receptions, birthday parties, and meetings.  The annual Victorian Tea held at the museum the first Sunday of November celebrates the gracious era of the Tudor Building's construction.  All of the volunteers and many of the guests appear in Victorian attire to enjoy a time of lace and linen table cloths, delicate tea cups, and tea party manners.  Pictured below are Courtney, Lyn, and Sandra at the Tea in 2010. 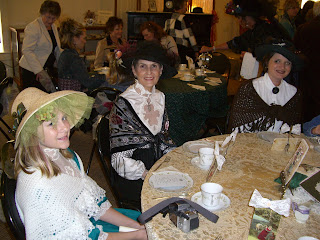 Lucille Hall was a teacher, and each summer she travelled.  Her delight was to collect objects from her foreign travels to bring home to share with her students, along with the many photographs she took.  Rather than expensive objects, she wanted toys, carvings, textiles, tools, and things the children could handle, and her museum is designed to continue that tradition.  Of course, there are also things for adults to see, many of which recall their own childhoods--antique furnishings, clothing, tools, and things that do not lend themselves to easy classification, like the collection of early bathroom commodes.  In that exhibit is a pre-plumbing porcelain commode that is very similar in appearance to modern commodes, except that instead of flushing, there is a removable porcelain bucket that can be lifted out for disposal.  The antique toilet was discovered by one of the board members where it had apparently been discarded in a pasture many years ago.  When she dug it out of the sand, it was in nearly mint condition, except for the deterioration of the wooden, ring-style seat.  Now it is exhibited as an unusual and rather fancy convenience for its time.
The museum also displays objects from the town's history.  One day while I was there, the old gymnasium basketball scoreboard was being installed for display, some of the men working to hang it having been schoolboys whose baskets were tallied on that very scoreboard decades before.
It is the eclectic and personal nature of small town museums that makes them so deserving of preservation.  The hodgepodge of items from daily lives sometimes reveal more history than carefully footnoted books, and a trip to the local museum allows a special peek backward into the lives of the community.  Without the preservation of Isaac's Journal by a woman who understood the importance of saving things from the past, the journal of an old bachelor, with his remaining family living far away, might have disappeared forever.﻿
﻿
Posted by Lynda Beck Fenwick at 7:03 PM 1 comment:

When I learned that my deceased cousin had owned a homesteader's journal, I began asking questions, starting at the museum to which Cousin Lucille had bequeathed many of her possessions.  Unfortunately, no one seemed to know anything about the journal, but I was invited to look through the unsorted boxes of my cousin's possessions stored in the basement of the museum.  Like many small town museums, the Lucille M. Hall Museum depends on volunteers, and I felt selfish searching for the journal when it was obvious that they needed help sorting.  I made a compromise with my conscience.  As I began opening boxes, I sorted contents and identified pictures that I recognized, but I chose boxes that looked like they might contain the missing journal.  When the last two volunteers came down into the basement where I was sorting to let me know they were leaving for the day, they told me I was welcome to stay and continue looking.  I wasn't too keen on staying alone in the basement of an old building whose creaking and dripping sounds were not familiar to me.  I left with them.

The next day, a volunteer had gone into the storeroom where I had been working and had opened the box next to the one I was sorting.  It was the last box on the shelf, and inside was Isaac's Journal.  If I had stayed to work only a few minutes longer, I would have found it.  The important thing, however, was that the journal had been found--and what a discovery it was! 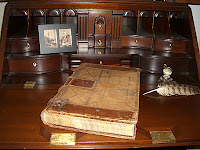 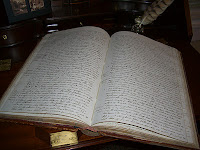 Each day from August of 1884 to June of 1891, Isaac wrote in this large, leather-bound journal, two inches thick, pages ten inches wide by fifteen and a half inches tall, containing 480 pages--the kind of legal journal in which records at the court house are kept.  In the front pages of the journal are entries from 1870 and 1871, when Isaac was a young druggist in Rossville, Illinois.  With no explanation for a 13 year interruption, the journal resumes during Isaac's years as a homesteader in Stafford County, Kansas.  Knowing that I wanted to use the journal for research, the museum board allowed me to take it home to do the work.
In order to organize and index all of the information the journal contained, I quickly realized I needed to transcribe it.  Isaac's penmanship is actually quite good, but he filled the pages from edge to edge in a fairly small script, and at my best, I was able to type only about one page every forty-five minutes.  I wasn't sure I could complete such a project.  After two weeks, I called one of the board members and told her what I was trying to do.  She said not to worry about how long it was taking, since without my inquiry, the journal might have gone undiscovered for months or even years.  The task of transcribing took me eleven months, involving one crashed laptop and a trip to my optometrist!
Mark Twain wrote in Innocents Abroad:  "At certain periods it becomes the dearest ambition of a man to keep a faithful record of his performances in a book; and he dashes at his work with an enthusiasm that imposes on him the notion that keeping a journal is the veriest pastime in the world, and the pleasantest."  Twain goes on to say that such enthusiasm only lasts about twenty-one days; however, Isaac's commitment lasted far longer, and it is a historical treasure.  The front page identifies the Journal as "Vol. 5th."  Sadly, the whereabouts of volumes 1-4 are unknown.
The writing done in 1870-1871 is that of a young man--full of ideas, opinions, and personal feelings.  When the journal writing resumes in 1884, the entries are of a more practical nature--the weather, his crops, labor done and done for him by others, economic matters, community events, and political activities.  Isaac seems to have been influenced in his changed style by a newspaper column authored by Henry Ward Beecher, which Isaac clipped and glued in the journal.  Beecher disapproved of confessional journal keeping, offering instead the following advice: "One may trace from day to day the mere facts of personal history, the proceedings of the farm, or the books read, visits made or received, the events in society, the conversations with men of mark, the facts of the weather, the seasons, the aspects of nature, and, in short, a journal for knowledge, in distinction from feeling, might be kept with great profit."  Isaac adhered to this advice for six years, preserving a record of prairie life and social struggles.
Isaac lived in an exciting time, but he kept his Journal for himself, written in sentence fragments and containing names familiar to him but a mystery to today's reader.  I decided to bring this historical place and time, with Isaac at its center, alive for readers!  Even while I was transcribing and indexing the Journal, further research began.
[Henry Ward Beecher (1813-1887) was the brother of Harriet Beecher Stowe, author of Uncle Tom's Cabin.]
Posted by Lynda Beck Fenwick at 9:12 AM 5 comments: