When I asked face book friends to share their New Year's Resolutions for this blog, a very special friend from law school replied with these words:  "I hate to share a resolution.  Like a wish, [it] may not come true!"  Interestingly, she is not alone.  My research for this blog indicated that many people are superstitious about sharing their resolutions for fear that might jinx the outcome.  Others decline to share their resolutions because they don't want anyone to know if they failed to keep them!

Isaac Werner never mentioned making a New Year's resolution in his journal, although he did mention attending a few New Years' parties.  My research indicates that the tradition goes back for centuries, perhaps 4,000 years, with its roots in religion.  The Babylonians are believed to have been the first, although their New Year began in mid-March when crops were planted.  They promised their Gods to pay their debts and to return borrowed objects!

Another ancient God is also connected with the New Year, for January is named for the Roman God Janus.  Of course, Janus is the 2-faced God that decorates doorways and arches, seeing both those coming and going.  Symbolically, he could look back at the old year as well as forward into the new year.

As for Americans today, the most common New Year's Resolutions fall into certain categories:
1.  Self improvement physically and mentally;
2.  Advancement in career and financial circumstances;
3.  Personal growth in such ways as education, organization, and time-management;
4.  Interpersonal relationships through volunteering, making new friends, and improving social skills;
5.  More time with family;
6.  Traveling;
7.  Confronting decisions, like marriage, parenthood, faith;
8.  And perhaps the newest one on the list and the one most quickly broken, Spending less time on social media!

Statistics about the number of Americans who make New Year's Resolutions were not found as far back as the late 1800s when Isaac Werner was keeping his journal.  But at the end of the Great Depression, it is said that only about 25% of American adults made resolutions, in contrast to the start of the current century when about 40% did.  Some believe that number has grown to 50% today.  Studies have shown that actually making a resolution to achieve the typical "Self improvement" goals, like more healthful eating, weight loss, exercise, and quitting smoking, will make you 10-times more likely to succeed than those who only want to do those things, without an actual resolution.

So, for those of you who decline to share your resolution because it might not happen, only you will know whether you succeeded or failed.  However, according to one survey for those of you who share your resolution with others and don't quite succeed, here are four great excuses that one survey found:  35% said they had set unrealistic goals for themselves; 33% said they didn't keep track of their progress; 23% said they forgot about what they had resolved to do; and about 1 in 10 respondents to the survey said they made too many resolutions! 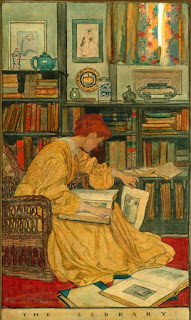 I'm only planning two resolutions for 2018.  I'm following my friend's example and keeping one resolution to myself!  However, the following resolution I'm willing to share:  "Make more time to read books by authors whose work I respect and learn to put books down when an author disappoints me!...although I may have to modify that commitment by making myself more careful about what I choose to read, since I seem to struggle with abandoning a book unfinished!!"  See, I've even built an excuse into my resolution in case I fail at laying a disappointing book aside!

Posted by Lynda Beck Fenwick at 9:14 AM No comments:

Happy Holidays to Everyone! 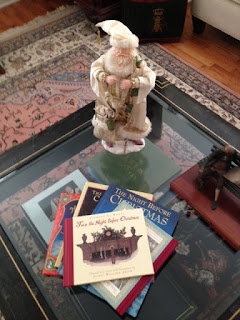 Followers of this blog come from all around the world.  Different topics attract readers from different countries, but every week I have many foreign visitors.  In December, I have had followers from Italy, Viet Nam, Ukraine, Spain, China, Brazil, Egypt, Russia, the United Kingdom, and France.  Readers from Germany, India, Australia. Canada, Ireland, and other nations are frequent visitors in significant numbers.

The internet links all of us around the globe, and I am delighted that my posts about history and an ordinary man who dreamed of creating a farm on the prairie in the late 1800s resonates not only with Americans but also with people everywhere.

Last week, my blog about Pratt, Kansas, and my hours in a family owned jewelry store drawing a picture of Santa Claus was read by 114 people in Italy and 98 people in Viet Nam, among the many others who visited the blog.  I'm glad it was a blog about an American small town, so that those readers can see a part of our country that may not always make the news.

So to all of you who read my blog, however you celebrate the holiday season, I send my holiday greetings with these special quotes I have selected for the season.

Christmas gift Suggestions:  To your enemy, forgiveness.  To your opponent, tolerance.  To a friend, your heart.  To a customer, service.  To all, charity.  To every child, a good example.  To yourself, respect.  Oren Arnold  (1903-1997; U.S. Representative and U.S. District Judge)

Christmas is a necessity.  There has to be at least one day of the year to remind us that we are here for something else besides ourselves.  (Eric Sevareid; American author and news journalist)

Posted by Lynda Beck Fenwick at 10:50 AM No comments:

For the first time, I believe, last week I did not post a blog.  The explanation is simple--my laptop was not available.  It returned home this afternoon, just in time for me to tell you about the Pratt (KS) Art and Music Walk.

I have often shared what a progressive arts community Pratt and its surrounding area are, with the state-of-the art Vernon Filley Art Museum, the impressive Native American Art Collection at the Pratt County Historical Museum, the rotating exhibitions at Pratt Community College, and Mother Nature's beauty on display at the Forestry, Fish, and Game Museum.  Not only the visual arts, but also music and theater are important at Pratt schools, churches, and community concerts.  Surrounding towns also respect the importance of the arts, examples of which I have mentioned in previous blogs.

Last June the first Pratt Art and Music Walk was held in conjunction with the Miss Kansas Pageant.  The second Walk was held December 2nd, and I chose to participate.  Merchants throughout the down town area participated, and I was hosted by Parson's Jewelry Store.  They were wonderful hosts, and I had a cozy corner just inside the front door in which to work.

The Art Walk lasted from 11 to 2, and I arrived with several sketches roughed out on my drawing paper, unsure what I would choose to do or how long it would take for me to finish one drawing.  I do not believe in copying the work of another artist or photographer, so the rough sketch was my own work; however, I positioned my portrait of Santa at a similar angle to a photograph I had found.

It would have been nice to have had a live model, but Santa is so terribly busy at this time of year that he couldn't spare the time to sit for his portrait for three hours!  I needed a reference to get my lights and darks correctly placed, and by blocking out my drawing at a similar angle I was able to use the reference photograph to place the highlights and shadows where they needed to be.  (I do work from photographs I have taken myself, especially when doing portraits of children, who are too full of energy to sit still for very long, but I prefer to take several photographs to help me capture personality.)

I missed the pleasure of visiting the shops where other participants in the Art and Music Walk were working and performing, but I did step outside to hear the music of the PCC Carolers!

I also enjoyed spending 3+ hours at Parson's, reinforcing my belief in the importance of supporting our local merchants.  We need to be reminded that local merchants give us so much more than a place to shop.  Yes, I did overhear some sales being made, but I also overheard advice and suggestions offered--a true service to the 'customer' but not a sale for the merchant.  I  overheard friendly conversations and empathy being disbursed without any expectation of a sale being part of the visit.

It's fun to go to the city to shop, and it's easy to sit down at the computer to place an order.  But when we can, it is important to buy from local merchants--if for no other reason than to selfishly make sure those stores can continue to stay open for us when we need them.

Posted by Lynda Beck Fenwick at 4:15 PM No comments: