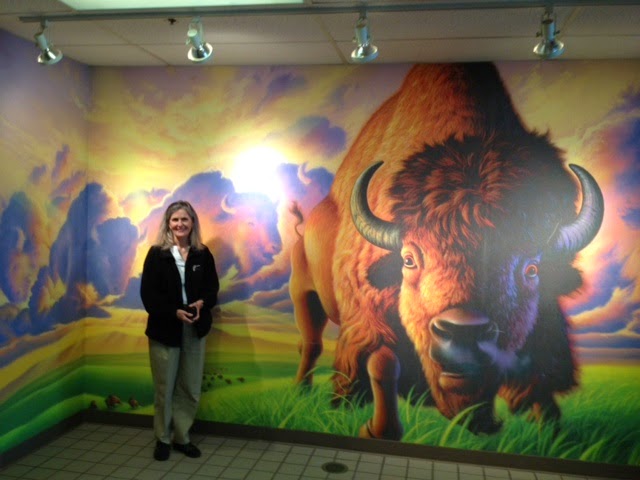 Perhaps when you read the title of this blog and then saw the painting of a buffalo you expected a story about the warmth of buffalo rugs, blankets, or robes.  That would have been logical, for their hides were used for those things.  However, this blog is not about buffalo hides.  It is about another gift the buffalo gave to settlers.  No, not meat either. 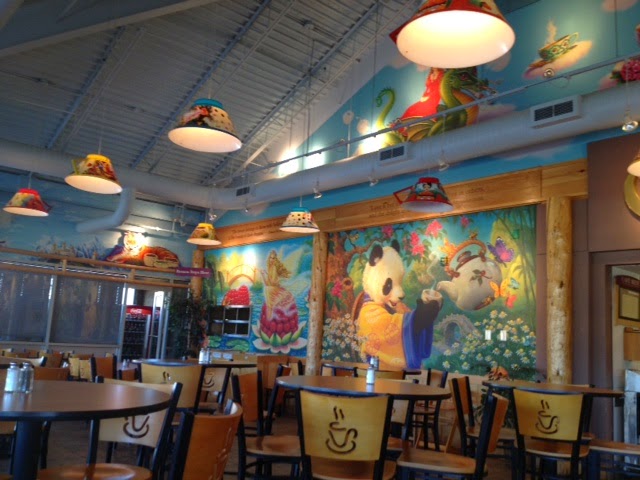 By the time Isaac Werner arrived on the prairie the buffalo were gone and the prairie coal had been exhausted as a fuel source.  Settlers had begun planting corn, and the husks were tied for fuel, the stalks were chopped into shorter lengths to feed into stoves, and the cobs were saved to burn once the kernels were removed.  (See "Corn Harvest, Then and Now," 9-18-2014 in the blog archives.)  Eventually trees were available for fire wood, but for the earliest settlers, prairie coal kept them warm.

(These photographs were taken at the Celestial Seasonings plant in Boulder, Colorado.  Visitors are welcomed for free tours and may also see their gallery of art and tea pots, purchase tea-related gifts in their tea shop, and dine in the cafe which is decorated with delightful murals.  To read more visit www.celestialseasonings.com/tours. )
Posted by Lynda Beck Fenwick at 8:34 AM 2 comments:

It was not that trees could not grow on the prairie.  Rather, it was that the prairie fires that swept across the plains burned whatever seedlings managed to root in the prairie soil before they could mature.  Once settlers arrived, they protected the trees by plowing fire guards around their trees and crops, which reduced the risk.  When fire was seen on the horizon, neighbors rushed to help however they could.  If they had horses, they plowed fire breaks, and those neighbors without horses and implements battled the creep of fire in the matted prairie grass with blankets or the coats off their backs, if that was all they had to slow the fire. (See "Prairie Fires," 11-21-2013 in the blog archives.)

However, it wasn't just prairie fires that were a threat to Isaac Werner's trees. Cottonwood trees attracted two particular pests.  Cottonwood Leaf Beetles cause damage two ways.  The adults eat the leaves, but they also lay their yellow, oval-shaped eggs on the undersides of the leaves, and when the larvae hatch they feed on the leaves.  The risk of these feeding beetles and their larvae is unlikely to kill the tree, but severe infestation can cause defoliation.

Isaac wrote in his journal that something was eating the leaves of his cottonwood trees, and it worried him.  However, he made no later mention of severe damage to the trees.  Today there are chemical controls available; however, natural enemies of the beetles may be the best protection, and chemicals could kill these predators.  Stink bugs, assassin bugs, ants, wasps, spiders, lacewings, lady bugs, and parasitic tachinid flies are natural enemies of the cottonwood leaf beetle.

Another cottonwood pest is the Cottonwood Borer, which also uses the cottonwood tree as its host both as an adult and as larvae.  The adults chew the leaves, stems, and new twigs, but unlike the beetles, the borers chew small pits near the base of the trees in which to lay their eggs.  The larvae burrow into the tree, first feeding on the roots and then burrowing through the heartwood near ground level.  As adults, perhaps 2 years later, they chew their way out of the tree and then dig up to ground level.  If the larvae are numerous they can weaken a young tree and cause it to fall in high winds.  As for the adults, their chewing on tender twigs can cause malformation of new branches.  The harm to more mature trees is unlikely to be significant, but since Isaac was growing young cottonwoods from rooting cuttings, his trees may have suffered some damage.  (See "Isaac Plants Cottonwood Trees," 12-2-2011 in the blog archives.)

However, it was neither the beetle nor the borer that felled the old cottonwood tree pictured at the top of this blog.  Rather, it was rot.  Common rot which starts at the base of the tree and gradually rots the inner core of the tree is perhaps the most common cause of mature trees falling.  The photograph at left is the same tree pictured at the beginning of this blog, and you can see how rot has eaten the center of the tree away.

One day last summer we watched a raccoon climb quickly up an old silver maple tree in our front yard and disappear.  As we continued to watch, the raccoon popped its head out of what from the ground had appeared to be the flat base where a large limb had been sawn off.  Only when the raccoon peeked out of the cavity did we realize that the removal of the large limb had cause the trunk below to rot.  It made a nice nest for the raccoon, but the trunk has been weakened and we do not know how deeply the cavity extends downward.  Our mature row of silver maples may suffer the same fate as the rotted cottonwood.

(Photo credits to to Whitney Cranshaw for the beetle and Jim Mason for the borer.)
Posted by Lynda Beck Fenwick at 9:29 PM 3 comments:

When the copy of Edward Bellamy's book, Looking Backward, arrived, Isaac Werner entered in his journal his enjoyment of reading about the main character, Julian West, who awakens in the year 2000, after having been put into a deep sleep in 1887 by a hypnotist.  When the fictional West makes his way up the cellar stairs of his former townhouse, he discovers a greatly changed world.  Isaac writes in his journal that he had to laugh out loud as West encountered baffling social changes, including the fact that women, rather than men, were the ones that extended marriage proposals in the year 2000.

The picture at right taken from the local paper to which Isaac subscribed (and in which his articles were frequently published), shows what a well-attired bride of Isaac's time might have chosen for her wedding.

What impressed Isaac about Bellamy's novel, however, were the descriptions of the amazing new world, with inventions such as credit cards, shopping malls, and electronic broadcasting imagined by Bellamy when the novel was published in 1888 that were incorporated into his futuristic world of 2000.

Bellamy's novel was first published in Jan. 1888 by Ticknor and Company, but Houghton, Mifflin and Company bought Ticknor, and Bellamy had the opportunity to make revisions for their 2nd edition published that same year.  Most modern editions use the second version.


The novel was issued during the Gilded Age, when great disparity existed between the wealthy and workers like Isaac, whether farmers, factory workers, miners, or other laborers.  (See "Isaac and the Plutocrats," blog archives at 4-5-2012.)  The society of 2000 that Bellamy envisioned was a nation with full employment, material abundance, and a social structure described as "Nationalism," in which all citizens enjoyed benefits on a more equal basis.  Bellamy treated women as equals to men, sharing the nation's work and being paid equally.

Several places in Isaac's journal his belief in women's equality is expressed, so it was to be expected that he would have approved of Bellamy's gender equality society.  He would also have approved of Bellamy's ideas for reducing the social extremes between abundance and want, with opportunity unlimited for those with ambition.  Isaac was not alone in his appreciation for Bellamy's theories.  Across the nation people were forming Nationalist Clubs, the first one having been formed in Boston late in 1888.  Eventually there were more than 160 clubs established for the purpose of implementing Bellamy's political ideas from Looking Backward as a national reality.


Isaac spoke at one of the Farmer's Alliance meetings, sharing some of Bellamy's ideas.  Apparently some of the ladies in attendance decided to tease Isaac about his enthusiasm for Bellamy by challenging him to allow the single ladies of the neighborhood the opportunity of changing Isaac's marital status from bachelor to husband.  Their teasing was published in the County Capital, but Isaac made no mention in his journal of any proposals from his female neighbors!

A few years ago when we were in New England, I hoped to visit Bellamy's house, operated by the National Park Service, but hours were limited and I could not arrange a visit.  Many people alive today have never heard of Edward Bellamy.  Some of his ideas were absorbed into the People's Party, of which Isaac was a member, (See "Politics and Wealth in Isaac's Day," 10-18-2012 in the blog archives), and some of those were adopted by the Democrats, especially FDR's New Deal.  In his own time, Bellamy was widely known, and at the end of the 19th century, only Harriet Beecher Stowe's Uncle Tom's Cabin had sold more copies.  Although Bellamy is not widely known today, reviewer Cecelia Tichi believes that "A century after its publication, Looking Backward holds its own as a work of contemporary relevance."  She concludes her review this way:  "His novel engages the continuously vexed relation in American culture between abundance and want, between work and leisure, between ambition and opportunity, and between occupation and identity.  The novel also remains compelling because, in a sense, it speaks to the alchemist in us.  For Americans have never abandoned the mission to transform a gilded nation into an exemplary golden one." (From her Introduction to the 1986 Penguin Classics edition.)

(Each year near Valentine's Day I post a blog having to do with Isaac Werner's flirtations.  If you are curious about Isaac and the ladies in his life, you may go to the archives to read my annual Valentine's blogs.)
Posted by Lynda Beck Fenwick at 9:10 AM 2 comments: