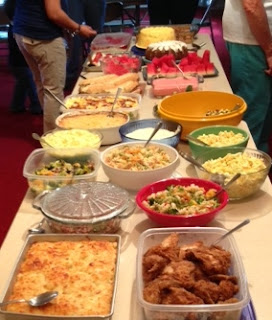 When we first came back to the farm as part-time residents, we celebrated with a pot luck dinner on the lawn.  I didn't think it was anything unusual, for when I was a child such occasions were frequent.  Of course, air conditioning was not common in every household, so summer evenings on the lawn were more pleasant than being indoors after a hot afternoon had baked the interior, which wasn't likely to cool off until bedtime or later.  Watermelons cooled in the tank or homemade ice cream the women made inside and brought out for the men to crank were frequent deserts.

For our return-to-the-farm dinner on the lawn, we had guests from distant cities and guest from farms not far away.  We provided the meat and something else that I no longer remember, and our guests brought vegetable dishes and deserts, as I recall.  It was not until the guests from the neighborhood began talking about what fun it was to dine on the lawn--something they hadn't done in years--that I realized that the scene I had recreated from my childhood was no longer common practice.

Isaac mentioned pot luck suppers several places in his journal.  He was the chairman for a Christmas supper at the school house for neighbors that belonged to the Farmer's Alliance.  The People's Party held a pot luck lunch in St. John for a political rally, although they would have called the noon meal dinner.

Pot luck meals have not disappeared--they are just held indoors in air conditioned comfort today.   Sometimes they are family events, like the Memorial Day noon meal where the photographs in the blog were taken.  Sometimes they are school events, like the annual pot luck supper on awards night at the local high school.  When Mother was living in the nursing home, families were occasionally invited to a pot luck supper so that residents could introduce that families. 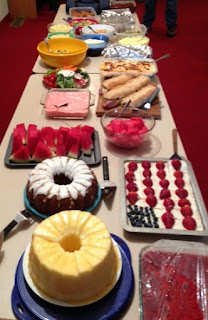 The food is as good as the cooks who bring it, and that is often very good!  With so many women working, many things on the long tables may come from the grocery store rather than their kitchens, which would not have been the case a generation or two ago.

My favorite pot luck supper story involved the monthly Sunday evening pot luck suppers at our church.  One lady brought a baked ham that was so outstandingly good that all the other ladies asked for her recipe.  She stalled with one excuse after another, until the other ladies finally assumed she was unwilling to share her special recipe and allow every other cook in the community to bake a ham as delicious as hers.

As it turned out, she wasn't being selfish about sharing her recipe.  It was just that her ham had a special ingredient that she knew most of the women asking for her recipe would not approve.  That wonderful flavor they all admired came from her having baked the ham in beer!

Posted by Lynda Beck Fenwick at 8:19 AM 4 comments: 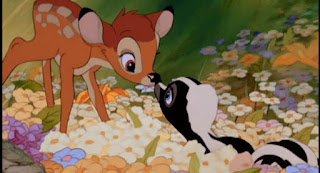 In general, I enjoy sharing our farm with wildlife, with the exception of moles and gophers! I'm not happy when deer eat our young trees or when mice seem to prefer houses and barns for their winter lodging, and coming upon a snake unexpectedly makes me jump.  Barn swallows are messy, but they eat a lot of mosquitoes, and it breaks my heart to see a coyote chasing a fawn.  Yet, in most cases we tolerate the other residents of our farm in exchange for the delight they give us.

Perhaps I saw Bambi  too many times and fell in love with Blossom, or maybe it was the charming Pepe' Le Pew in Looney Tunes that gave me such a soft spot in my heart for skunks.  I actually think they are beautiful.  Unfortunately, their odor isn't, nor is the risk of rabies. 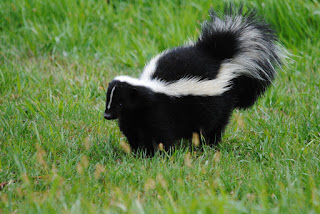 Isaac Werner had no soft spot for skunks.  They were a danger to his chickens, and in one instance when a skunk managed to get inside his hen house he killed it with a hammer.  (Isaac never mentioned owning a gun in his 480 page journal, nor was a gun mentioned in the extensive inventory of his estate, although the details did include his toothbrushes!  Apparently he did not own a gun.)

One evening, when he had worked late helping a neighbor put the roof on his dugout, he returned home to find a "family" of skunks in his house.  He wrote that he disposed of them quickly, but he didn't mention what he used to do that, and I can only imagine how his house smelled when he finished!

Whatever Isaac used, he must have been close enough to have risked a bite by the skunks.  I don't know if rabies were a problem for the settlers, but I do know that a skunk that showed up at Isaac's farm was about to be a dead skunk too!

Posted by Lynda Beck Fenwick at 9:45 AM No comments:

It is a dark, damp, windy morning at the farm, but I had a fabulous post ready to send.  I clicked "publish" as I always do, and then clicked "View Blog" to see the post.  It is gone!  So this morning I am afraid to send another completed blog out into the stormy weather where Mother Nature seems to have intercepted my earlier post.

Maybe she will read it and send it along to you later this morning when she is in a better mood...I'm still hopeful I can retrieve it...somehow.

I know that I have procrastinated so long that many of you may have thought I would never really get back to my manuscript to make revisions.  Well, I have!  While I was going through the manuscript, page by page, editing and tightening, I collected references to photographs taken at Isaac's farm.  This week's blog shares those references in hopes that someone might identify a photograph in their collection of old family pictures as fitting the description.  (The photo at right is one a blog follower shared with me of the Neelands, who are mentioned in Isaac's journal.)
Isaac met amateur photographer Seth Blake at a political rally in Pratt, KS in July of 1890 and was delighted to learn that Seth lived only 7 miles south of Isaac's homestead.  A quick friendship formed, and the following day the two men worked together at Isaac's farm building a dark tent.  Later that day they exposed 2 dry plate experimental views of Isaac's well curb and stable.
Occasionally Seth would leave a camera with Isaac to use, but most of the time he came on Sundays to take the photographs himself.  Isaac took photographs of the Co-operative Potato Patch and of his horses.  When Seth came the following Sunday, he photographed the Millers, the Campbells, the Fracks, and the Fergusons at Isaac's farm, as well as a group of 9 women who posed under the trees and by Isaac's well curb.
One Sunday was particularly busy, beginning with appointments with Bonsals and Mayes at their homes, and continuing back at Isaac's farm of Graff and Penrose in their buggy, the Carr team and wagon, boys on horses, girls posed sweetly, Sadie and her children, and Mrs. Henn and her family.
The neighborhood made coming to Isaac's place a regular Sunday destination, whether to pose or merely to enjoy watching others being photographed.  One Sunday Seth Blake photographed one group of youngsters in the lovers' promenade and the McHenry team and his boys on horseback.  However, the center of attention that day had been Miss Anna Carr and Miss Balser.
Seth Blake failed to get photographs back to people promptly, and the enthusiasm for posing waned, but Isaac was still picking up photographs at Miss Shira's gallery for Blake the day before the 1890 November election.  That same trip, Isaac mailed views of his farm to Harry Bentley in Salt Lake City, and to his siblings.
On a later trip he complained about the quality of Miss Shira's work in processing the glass plate negatives, believing too much having been done by an apprentice rather than by Miss Shira herself.
As you can see, a great many of Isaac's neighbors had their photographs taken by Seth Blake, and most of those pictures were processed by Miss Shira's studio.  If you recognize any of the family names I hope you will take a moment to remember whether there are any old pictures in your collections that might match the underlined descriptions.  Most of these pictures were taken at Isaac's homestead, so it would be wonderful if an image of Isaac's farm could be found, and equally wonderful if images of people he mentioned in his journal could be located!
(Neither of the two photographs above was taken by Seth Blake, but they are intended to be representative of the types of pictures described.  The children on the horse are my aunts and uncle. )
Posted by Lynda Beck Fenwick at 7:38 AM No comments: