A Different Kind of Taxes

In the late 1800s when roads and bridges were needed just as they are today, it was up to the homesteaders living on the prairie to manage for themselves.  There was a "road tax" owed by every adult male 45 and younger, paid not in cash but rather in labor.  A set number of days would be determined by the township for all of the men to work, maintaining the township roads and bridges.

Isaac Werner records in his journal the various days each year that he worked to fulfill his road tax obligation.  He did not have a horse for several years, so the labor he provided was strictly his own 'sweat and tears.'  One year, a neighbor had left the community for a visit and he loaned Isaac his horse to use in his absence.  Isaac took advantage of having the horse, and he and three other neighbors satisfied their obligation by filling holes.

Originally Clear Creek Township was six miles from north to south and twelve miles from east to west.  Isaac writes about going to a part of the township that he rarely traveled to satisfy his road tax, filling in around a bridge.  (From his description, it was probably the bridge seven and a half
miles south of Macksville.)  Generally, men worked on road projects nearer their homes, but if labor was needed further away, they put in their time wherever it was needed.

When Clear Creek Township was divided to create Albano Township to the east, making both townships six miles square, Isaac began satisfying his road tax nearer his claims in the new Albano Township.  He commented in his journal about the day he fulfilled his last road tax obligation.  It was memorable, because they were working on the approach to a bridge and he was slow getting out of the way of the scraper.  It hit his ankle and caused a bad sprain, but he felt lucky that he had not broken his leg on the very last day he was obligated to pay his road tax!

Isaac also wrote about mowing the prairie grass between his homestead and the school house, which was used as a community gathering place, so that when he walked there he did not get his legs wet in the tall grass.  A neighbor has told me about his ancestors doing the same thing, although they mowed from their claim all the way to Iuka.

Farmers also mowed around their claims, not only to use them as roads but also to minimize fires reaching their claims in a prairie fire.  Plowing was more effective, and before Isaac had a horse, he worried that his neighbors didn't plow their shared fire guards frequently enough.  When he finally got a horse of his own, he was diligent about keeping the fire guards plowed.

How dependent we are today about having government equipment and workers to take care of the things homesteaders had to do for themselves.
Posted by Lynda Beck Fenwick at 8:14 AM No comments:

The Principles of our Ancestors

In these times which seem so unsettled, with so many traditions and customs abandoned, I thought it might be interesting to see what our ancestors believed to be important.  The Farmers' Alliance was an organization formed by farmers who came together in hard times to work toward a better life.  They shared ideas about farming methods and crops, and they were troubled by the growing disparity between working people like themselves and the wealthy and powerful few who exerted so much influence in our state and national capitals.  Initially, the Farmers' Alliance was not political, and they welcomed members from all political parties.  What was especially unusual was their inclusion of women, at a time when women did not have the vote.  Yet, women were active in the Farmers' Alliance.  Eventually, the Farmers' Alliance joined with other populist organizations to form a political party, in which women continued to play a part, although they still lacked he vote.

What I thought you might enjoy is the Declaration of Principles those farm women and men of the Farmers' Alliance considered important in the late 1800s.

1.  To labor for the education of agricultural classes in the science of economical government, in a strictly nonpartisan spirit.

2.  To develop a better state mentally, morally, socially, and financially.

3.  To create a better understanding for sustaining civil officers maintaining law and order.

4.  Constantly to strive to secure entire harmony and good-will among all mankind and brotherly love among ourselves.

5.  To suppress personal, local, sectional, and national prejudices, all unhealthy rivalry, and all selfish ambition.

Later, they added the following:

To exercise charity toward offenders, to construe words and deeds in their most favorable light, granting honesty of purpose and good intensions to others; and to protect the principles of the Alliance unto death.  Its laws are reason and equity, its cardinal doctrines inspire purity of thought and life, and its intensions are "peace on earth and good will toward men."

In 1890, when the Alliance had attained its largest proportions, its voting membership was estimated at 2,500,000.

Although the Farmers' Alliance has disappeared, the wisdom of our ancestors, as expressed in this Declaration of Principles, seems deserving of reflection.  Even if, or maybe because, these Principles won't fit in a tweet, they seemed worth sharing.
Posted by Lynda Beck Fenwick at 6:56 AM 3 comments: 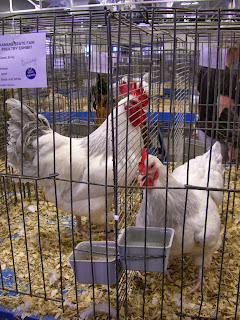 Not your typical "love birds" you say?  Why not?  The bride is dressed in white, and the groom is wearing tails--well, tail feathers--in the ever popular gray.

Once again Valentine's Day has arrived, and for those of you who follow this blog regularly, you know that I write a blog yearly to recognize this special day for lovers.  If you have missed reading them, you can go to the inventory at right,  click on the year, and then scroll down to February to read those past blogs.

In doing my research for the manuscript, I found an article in the local populist newspaper of Isaac's time, the County Capital, in which the local reporter in his community praised Isaac's farm for its neat, prosperous appearance.  The reporter could not resist teasing Isaac a bit by concluding the article with this comment:  With such a nice farm, "we think the rooster of the prairie should take a young lady under his wing."

Isaac Werner's journal mentions his admiration for several young ladies, and a cryptic note refers to "a second refusal," which I assume was an unsuccessful marriage proposal to a lady with whom he was corresponding back in Illinois, after he had lived in Kansas for several years.  His journal also mentions a young lady who came to St. John as a Prohibition lecturer, on whom he made a social call one afternoon, but soon after, she left St. John and the romance never had the chance to begin.  Although I believe Isaac would have enjoyed a wife by his side during his years on the Kansas prairie, being a farmer's wife was a hard life in the late 1800s, and the well-educated city women he admired may not have been willing to assume the responsibilities expected of a farmer's wife.

So, on this Valentine's Day I have chosen the handsome couple pictured above to remember Isaac Beckley Werner, the Rooster of the Prairie, whose journal inspired my efforts to tell the story of those early settlers who came to Kansas in the late 1800s.

If you watched the State of the Union Address on Tuesday night, February 4, 2019, you must have noticed all of the women dressed in white.  The purpose was to remember those suffrage women of the past who struggled for decades to win the vote for women. 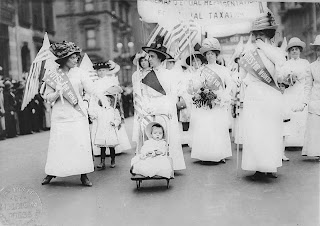 Although white is the color we most frequently associate with suffragettes, they also wore purple for loyalty and dignity; green for hope; and white for purity.

We tend to associate the Suffrage Movement with the early 1900s, perhaps because women did not gain the vote until that century.  The bill was passed in 1919; however, the final state to ratify and make the bill law was Tennessee in 1920.  Some states took a very long time to ratify, the last state being Mississippi in 1953. 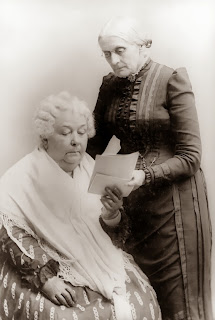 Although we may remember those 20th century suffragettes in white, the movement began much earlier.  Probably the best known historic event is the Seneca Falls Convention held in 1848.  Among the five women calling that event was Elizabeth Cady Stanton, who began working with Susan B. Anthony in 1851, both pictured above later in their lives.

Kansas women were urging their rights even before Kansas had been admitted as a state.  In 1859 women sought equal rights at the Wyandotte constitutional convention, and although they were not allowed to speak, women's mere presence at the convention may have contributed to the passage of women's rights to acquire and own property and to retain equal custody of their children.  Traditional laws transferred a woman's property to her husband when she married, and in the event of divorce, men automatically gained custody of their children.   In 1861, the first state legislature granted women the right to vote in school elections, and a quarter of a century later, in 1887, Kansas women won the right to vote and to run for office in city elections.  Of course, it was men who were needed for passage of these rights, since women could only lobby and persuade from outside of the government.

While these voting rights may seem minimal, given the fact that women were excluded from voting in state and federal elections, Kansas was seen as quite progressive for those times.

Posted by Lynda Beck Fenwick at 8:40 AM No comments: