Those who had not chosen to follow Rigdon to Greencastle in 1847 had gradually begun to look to William Bickerton for leadership, and by 1849 he had been accepted as their leader.  They flirted with the idea of  joining another group of Mormons, but in 1852 Bickerton was the recognized leader of  The Church of Christ.  By 1857 he had nearly 100 followers.  During this time Bickerton's belief in having been called to minister to the Native Americans, whom he called Lamanites, only grew.  He explained:  "No man could receive greater Authority than I had received, it was from God Himself, and that Angels nor men could give anymore; Therefore go forward and accomplish that which I have commanded and I will be with you always to the end."  Bickerton felt that Kansas was a good location for his mission, and while studying a Kansas map with his brother he "felt [moved] by the power of God when I touched the map that Stafford county was the place the Lord wanted me."

(For those interested in reading more about Bickerton and the experiences surrounding his mission in Kansas, two published articles available online by Gary R. Entz, "Zion Valley, The Mormon Origins of St. John, Kansas," and "The Bickertonities: Schism and Reunion in a Restoration Church, 1880-1905" can be consulted.)

In 1868 Bickerton had left Pennsylvania for the Cherokee Nation with the specific goal of meeting the newly elected principal chief of the Cherokee Nation, Lewis Downing.  Downing had his hands full trying to reunite divided tribal factions, and he had little interest in Bickerton or his mission.  However, he did allow Bickerton and his fellow Mormon, William Cadman Sr., to preach among the Cherokees.  Although the success of his mission was questionable, Bickerton later wrote that he "had never spent a better day in the work of the Lord."


He proceeded with his plans to create a colony in Kansas, from which he and his followers could fulfill his dream of ministering to the Lamanites.  Of course, the financing of their mission and the recruiting of families willing to assume the hardships of creating a new life on the Kansas prairie had to be done before his dream could become a reality.  Even once they had arrived the first necessity would be conquering the challenges of carving farms and pastures out of the prairie to become self-sustaining before their mission work could begin.  All of that proved to be more difficult than Bickerton had anticipated.
Posted by Lynda Beck Fenwick at 9:39 PM No comments:

The Mormon group that settled Zion Valley Colony was led by William Bickerton, leader of the denomination called The Church of Jesus Christ.  The death of Joseph Smith had resulted in the splintering of his church.  As in many situations in which a strong leader dies, more than one would-be leader steps forward to assume the vacant role, and the issue of plural marriage, or polygamy, had also presented a crisis of faith for many.

William Bickerton, who had been baptized in England as a Methodist at the age of one, had immigrated to the United States, settling in Pennsylvania as a coal miner.  In 1845, at the age of 30, he set aside the Methodist faith when he was baptized by Sidney Rigdon at the church near Pittsburgh.  The decision by Rigdon to relocate had splintered his followers, and Bickerton was among those who chose not to follow Rigdon to Greencastle.  He found himself among those members near Pittsburgh without their leader.  Bickerton had refused to accept plural marriage, so joining Mormon denominations practicing plural marriage was out of the question for him.  However, he did not feel he could return to Methodism.  When The Church of Jesus Christ formed in 1862 and Bickerton was chosen for leadership, he accepted.  He felt called to spend the rest of his life in missionary work, and he focused on bringing his faith to Native Americans.

In the fall of 1874 he made a trip to Kansas to visit the area to which be believed he had been called, and that area was near what became St. John, Kansas.  He returned to Pennsylvania to collect those who wished to follow him on his mission, and it is the arrival of William Bickerton with his followers that is depicted in the new mural in St. John, Kansas.


Photo Credit:  The image of William Bickerton at the top of the page is from the FHSU Forsyth Library Collection, W. R. Gray Studio.  The glass plate negative from which the image was produced is part of the collection of the Stafford County Museum in Stafford, Kansas, and the restored Gray Studio is in St. John, Kansas.  It appears that the photograph of William Bickerton was a studio photograph, taken in Gray's studio, which is now restored and preserves another important part of St. John's history and the history of the entire region.
Posted by Lynda Beck Fenwick at 8:07 PM No comments: 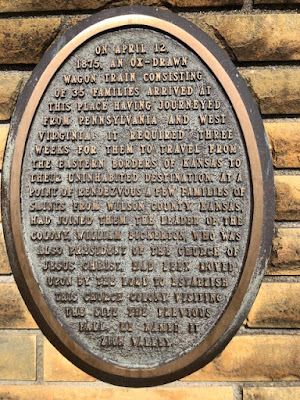 The initiation of having a mural in St. John, Kansas to depict the settling of the region came from  local resident, David Robinson.  As a member of The Church of Jesus Christ in St. John, he had reason to be particularly familiar with the early settlement of the region.

There were a few non-Mormon settlers already in the region in 1875, but their claims were widely scattered.  It was the idea of Mormon Leader William Bickerton to bring a group of fellow Mormons to create a colony.  Rather than scattering their claims at a distance from one another, they created what they named Zion Valley Colony.  With promised support from members of their former community back in Pennsylvania, as well as some in West Virginia, they quickly went to work clearing fields and planting crops so that they could support themselves as quickly as possible.  Many of these settlers had been miners, not farmers, but they did surprisingly well.  The biggest problems for them were weather and broken promises by those they had depended on for help until they got the colony to a point of self-sufficiency.

In case your eyes are challenged in reading the plaque that currently appears in from of the Church of Jesus Christ in St. John, here is the transcription:  "On April 12, 1875, an ox-drawn wagon train consisting of 35 families arrived at this place having journeyed from Pennsylvania and West Virginia.  It required three weeks for them to travel from the Eastern Borders of Kansas to their uninhabited destination.  At a point of rendezvous a few families of Saints from Wilson County, Kansas, had joined them.  The Leader of the Colony, William Bickerton, who was also President of the Church of Jesus Christ, had been moved upon by the Lord to establish this Church Colony, visiting the site the previous fall.  He named it Zion Valley."

More of St. John's history to follow as the Series continues.
Posted by Lynda Beck Fenwick at 9:12 PM 2 comments:

The county seat of St. John, Kansas has a new mural.  This week's blog is the first in a series about that mural.  Most people in the area have a general idea about the founding of what became St. John, but over the years, details have faded.  This series is intended to refresh our knowledge about the community's beginnings. 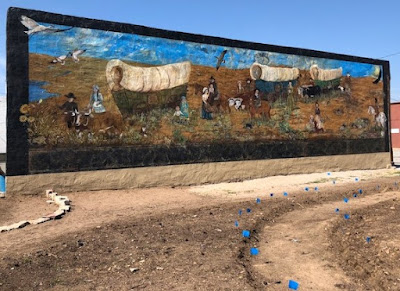 The idea of a mural began with St. John resident David Robinson, but he quickly involved others in making his idea happen, particularly in finding financial supporters for the project.  With surprising speed, from Robinson's initial efforts in October 2019 to the first paint applied to the wall in late March of 2020, financing had been arranged, the brick wall had been prepared for the mural with an application of mortar, and scaffolding had been acquired. 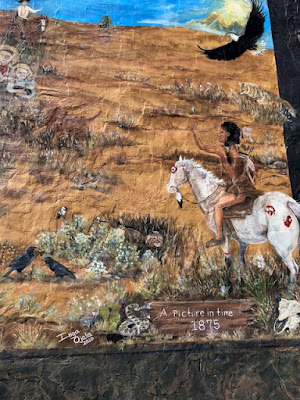 As is apparent in the first photograph, landscaping is planned to enhance the mural.  More history of St. John's founding will follow in upcoming blogs.
Posted by Lynda Beck Fenwick at 7:15 PM 2 comments: