Disappearing Traces of the Past

My best friend from childhood lived in a 2-story, clapboard house not much different from my own. A few years ago, with wiring, plumbing, and water lines deteriorating from age, and few tenants willing to pay even minimal rent for old country homes, her family made the decision to raze the house and barn. It is a pattern many Kansas families have followed as parents who farmed the land retire or die, and their offspring, who have left the farm for careers in the city, lack the ability or desire to take their parents' places on the farm. For a while the empty house is left to await a new occupant, but when no tenant appears, the house begins to sag and vandals break out the windows, hastening its deterioration. At last, the decision to tear the house down is made, and all that remains to tell the tale of a family who once lived there are a few trees clustered around an empty space. 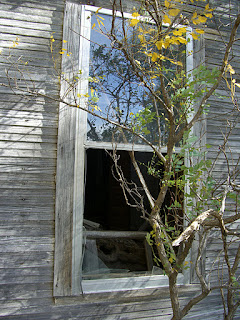 Near my childhood home is a house grayed with age, the roof a skeleton of horizontal lath capped at the peak by a few defiant wood shingles, clinging where they were nailed decades ago. When I was young enough to ride the school bus, a family lived there, and I remember stopping at the edge of the road to await the child who came running out each morning to board the bus. I do not know how long the house has stood empty, but believing it long abandoned, I paused one afternoon to visit a house on the cusp of disappearing forever. I assumed it contained nothing but the debris that had fallen from and through the skeletal roof, but as I peered through a broken window I saw traces of the family who had last occupied the house--clothing and furnishings left behind as if they had only intended a short absence. Soon, I suspect, all of it will be gone, except for what remains in a few memories.

Not only rural homes have disappeared but also entire small towns. My father used to refer to places that were already gone when I was a child. "He lived down around Strickland," Daddy would say, although that meant nothing to me, Strickland having disappeared before I was born. I could not understand why he gave directions using nonexistent places. 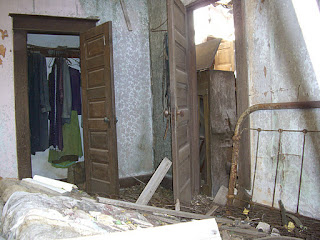 Now I find myself doing the same thing. Roads around our farm have been given numbers to facilitate deliveries to country homes and assist 911 responders. I struggle to remember the numbers when I am giving directions, falling back to the names of roads familiar from my childhood--Emerson Road and Antrim Road, references to schools that closed in the 1940s and structures that have been torn down. My father always called the land just north of our home the "Old Dick's Place," or at least I thought that was the name he used. Only while transcribing Isaac's Journal did I learn that it was the "Old Dix's Place." Isaac's friend, "Doc" Dix, claimed the north half of the section as his homestead and timber claim. He was a medical doctor who decided to try his hand at farming. His family home included a store and the community post office, of which he was the postmaster. After living there long enough to mature his claims, he and his family moved into Pratt Center--actually into Saratoga, another disappeared town which in Isaac's day was a bustling commercial community that faded away after losing the battle with Pratt Center for the county seat.

Today, like my father, I refer to land around our farm by the names of farmers who have been dead for decades, even generations--the Dix Place, the Kennedy quarter, the Cotton Place, Southard's Place. My husband, who did not grow up in the community, has learned the names from me, although he has no memories to associate with the names, just as I learned them from my father. Once there were families living on the land to which their names are affixed, with houses and barns and dreams that their hard work was building a legacy for future generations. Today not one of those places is owned by a descendant of the farmer who once lived there, despite those dreams. The buildings are gone and the original trees are old and dying. 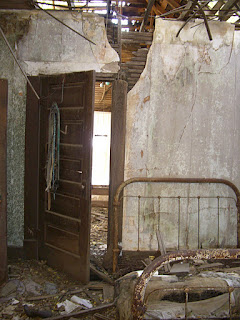 Even the land itself has often been transformed by farmers leveling the terrain for irrigation. Isaac wrote about his "pinnacle hill" which he would climb to watch fireworks in distant towns on the 4th of July. I could not identify much of a pinnacle on either his homestead or the timber claim, but recently I spoke with the current owner of the land, who told me there was once an exceptionally high hill on the property. He described the location, which retains a small elevation, and told me that Isaac's pinnacle hill was once at least thirty feet higher before grading.

As our conversation continued, he recalled having to clean up the remains of an old house. I eagerly asked him to describe what he remembered, and he said it was a 2-story, wooden house, fairly large, but in too much decay to describe any details. I asked if it had a cellar, and he confirmed that it had a small one with an exterior entry. He could not tell me whether it also had an interior stair, because of the deterioration of the house. I shared with him Isaac's description of his 2-story, wooden house, and how he added exterior stairs so he no longer needed to carry potatoes through the house when he stored them in the cellar during harvest. As winter approached, he would tramp straw into the exterior stairs for insulation from the cold, using only the interior stairs until spring. The current owner recalled the approximate location of the house, so I learned where to picture Isaac's home although it is long gone.

Nearly all traces of Isaac's life have disappeared--the trees about which he felt such pride reduced to a few scraggly rows at the edges of fields, his dugouts filled, his house torn down, even his land transformed. Only his words survive.
Posted by Lynda Beck Fenwick at 9:39 AM

These pictures were captivating. The mind just wonders who these people were and if they had children, how many and where did they all go. This would really be interesting to know who all the people were who lived in this house and why they left so quickly and what their lives were like. Also, are there any ghosts or ghost stories about any of these houses?

This is a sad and wonderful post. I hate seeing the old houses and empty farms. They are always the end of someone's dream.
http://dablogfodder.blogspot.com/2008/10/abandoned-farms.html

These pictures peeked my curiosity. I love to see things that are remnants of our ancestors. You mentioned Saratoga in this blog. Do you know the story of what happened to the once known town of Saratoga?

Three towns battled for the county seat of Pratt County--first Iuka and Saratoga, then a new town named Pratt Center. A lot of tricks were played to try to gain the advantage, and the contest lasted several years and involved the Kansas Attorney General. Eventually Pratt Center, now called simply Pratt, claimed the prize. Being only about two miles east of Pratt, Saratoga had little reason to survive as an independent town, although they tried for a while.

As for ghosts, I don't believe our community is much for ghost stories. As for ghost towns, most of them disappear when farmers reclaim the land for crops.