Isaac Learns to Farm on the Prairie

To survive as a prairie farmer, Isaac had a great deal to learn, and he approached his education enthusiastically. His journal became his record of weather, planting dates, specific farming methods such as depth of planting, width of rows, and spacing between seeds for each variety of seed sown. He recorded yields of his crops, evaluating which of his experiments succeeded and how he might improve. From 1884 to 1891, Isaac's daily entries in his journal document the challenges faced by homesteaders carving farms out of the prairie sod and learning how to raise enough to survive.

The Morrill Act of 1862 established federal land-grant colleges by giving states federally controlled lands for the colleges, with curriculum focused on agriculture, science, and engineering. Kansas State Agricultural College, now Kansas State University, became the first of these federal land-grant colleges, although there are other colleges and universities established earlier as state land-grant colleges. Isaac was eager to learn from the research being conducted at Kansas State, and he developed an ongoing correspondence with Professor E. M. Shelton, who in 1874 became the Farm Superintendent at the college. Prof. Shelton recommended mixed farming of crops and livestock, but he was also well known for experimentation with wheat. In about 1889 Prof. Shelton left Kansas State for Brisbane, Queensland, Australia to work under the Minister of the Interior, promoting agricultural interests in the colony. Prior to Shelton's departure, however, Isaac sought the professor's advice and shared his own farming ideas.

Isaac believed in the importance of identifying soil types, describing in his journal what was needed: "[S]ome competent man to go through the country and inspect each quarter section of land, its surface soil and its sub-soil, and classify them by number or letters according to the predominating elements of soil." By mapping the soils in every county, it was Isaac's opinion that better implements could be manufactured to suit the soils found in Kansas. As for himself, he never stopped modifying his implements in various ways to improve their functions, and he shared these modifications with the farming publications to which he subscribed.

In February of 1888, Isaac wrote in his journal: "I for my part getting disgusted to look on such faded styles of farming for this droughty country. If no better methods be resorted to, bankruptcy will continue to stare into the face of everyone trying to continue such farming." While Isaac studied new farming techniques, other farmers continued to struggle with farming methods they had used on European and Eastern U.S. farms. Isaac believed that everyone would benefit from a County Agricultural Society where farmers could meet to share successes and failures and learn methods better suited for their locale.

Not one to keep his ideas to himself, Isaac set about forming such an organization, beginning with an article published in the local newspaper at the end of March. He wrote: "The farmers of Stafford county are requested to meet in the court house at 2 p.m. in the city of St. John, Wednesday April 4th for the purpose of discussing agriculture in Stafford county. It is a well known fact that many farmers are not sufficiently familiar with climate and soil of Stafford county, to make a success at farming. The opinion of the farmers who have been in Stafford county for years, and have made a success of farming, is of great value, therefore every farmer in the county who has a bit of valuable experience that would be of benefit to his neighbor is earnestly requested to be present...[together with] every mechanic, business and professional man..."

The day of the advertised meeting, Isaac got to town early to promote attendance, and the lack of interest nearly caused him to give up on the idea. "I had to busy myself most the afternoon running about St. John what could be done towards making a start to organize our County Agricultural Society. The general indifference show[n] by town and country people really astonished me...Another 5 minutes more procrastinating and I would have made up my mind to drop all efforts on my part for good for all time to come, but concentrate my efforts to make the best of all my experience hereafter in a selfish way..." At the last moment, a small group of men arrived for the preliminary meeting, at which Isaac was chosen chairman.

The permanent organization was formed in the following weeks, but participation continued to be disappointing. In addition to writing letters to individual farmers that he knew, Isaac wrote the following appeal for publication in the newspaper: "After a ten years settlement of Stafford county, the fact begins to dawn on the minds of many of our progressive farmers, that many of the difficulties presenting themselves in our new soil and climate, for successful tilling, can be only overcome by a united effort on the part of the farmers themselves. The object of this association, the greater part of the soil of said county, is composed of what is generally called blow-sand, and handling this light soil successfully, (productive as it is) is no small matter when brought under cultivation, its liability to blow has to be avoided, and how this had better be done, is still a vexed question, but generally, in the counsel of many there is wisdom." 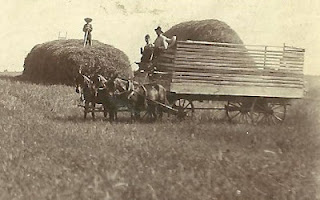 Eventually, others saw the importance of the organization, and the County Agricultural Society Isaac had envisioned began to serve its purpose. Representatives were selected from each township in the county, and although some townships had more active members than others, the Society offered the opportunity for farmers and merchants to come together and begin sharing information that helped make Stafford County a more productive farming area. A county agricultural society was not unique to Stafford County, but without the vision and promotional efforts of Isaac, it seems less likely that anyone else would have stepped forward to organize the local group.

As Isaac prophesied, bankruptcy did continue to stare some farmers in the face after that, and more than a few of them lost the staring match, but others, like Isaac, learned better ways to farm the sandy prairie soil beneath the stubborn sod, and descendants of a few of those families still carry on the farming tradition in Stafford County today.

The old photographs are of my grandfather Royal D. Beck's harvesting crew sometime after the turn of the century and are from the Beck family's personal collection. Remember, images can be enlarged by clicking on them.
Posted by Lynda Beck Fenwick at 9:54 PM

As a former agriculture extension worker, I found this post fascinating. It still amazes me after so many years, how resistant some farmers are to new technology. My own father would have been in the bottom 20% of adopters.
So here were a bunch of struggling farmers who were not even interested in learning if there even was a better way to do things.
I think this has pretty much changed in the past few decades as only those who use the best technology survive.