Thanksgiving on the Prairie 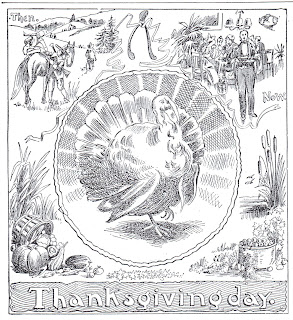 The wonderful images in this post appeared in the County Capital newspaper to which Isaac subscribed.  While the images depict a traditional bounteous Thanksgiving, on November 25, 1890 Isaac wrote in his journal:  "Not much observation of Thanksgiving as I noticed, too little to thank for from a rotten and corrupt administration."  The contrast between the newspaper images and Isaac's words illustrate perfectly the economic circumstances of the Gilded Age.  As farmers on the prairie were literally starving, wealthy industralists and monopolists in cities like New York, Chicago, and Pittsburgh were enjoying Thanksgiving feasts in their mansion dining rooms, with servants presenting the Thanksgiving turkey on silver trays that reflected the candle light from crystal chandeliers. 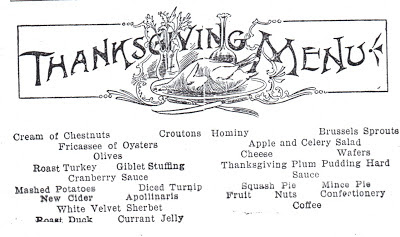 Populist newspaper editor of the County Capital, John Hilmes, who like most other small newspaper editors published local news on the front and back pages of his paper and purchased center sheets with the national and international news from a larger city paper, ignored the irony of delivering to his starving subscribers a menu including Fricassee of Oysters, both Roast Turkey and Roast Duck, and five different deserts, not including the fruit and nuts!
A few days before the holiday, Isaac angrily described in his journal how a neighbor was poaching quail from his property.  Isaac loved wild birds.  In the spring he recorded the dates when song birds returned, and he used the migration flights of ducks and geese to predict weather changes.  Especially important to him were the wild quail, such favorites that in lean times he scattered his precious corn as feed for them.  Although he raised chickens and describes boiling the roosters to eat, he never mentions killing game birds for food.  He posted his property to prohibit hunting on his 360 acres by others.  When that "Scroundal Stambaugh" rode his buggy along the side of Isaac's homestead and timber claim shooting the quail on Isaac's land, he walked toward the sound of the shooting, making himself seen to stop his neighbor's poaching.
Isaac did not mention what he ate for Thanksgiving dinner in 1890, but it is certain that he had neither roast duck or quail!

Remember last week's invitation to share thoughts about Thanksgiving!  I have received several wonderful e-mails sharing Thanksgiving traditions and memories, but before I begin putting those stories together for next week's blog post, I want to remind those of you who have been meaning to send an e-mail to me at txfen@msn.com with your contribution to the Thanksgiving blog that it is not too late.  Please send them to me ASAP so I have time to include them in the post!  Thank you to everyone who has sent stories--they are great!
﻿
Posted by Lynda Beck Fenwick at 8:21 AM