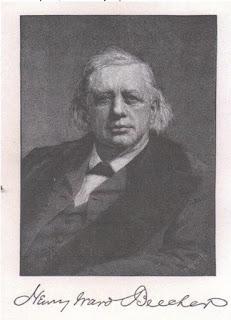 Every young man would do well to remember that all successful business stands on the foundation of morality.  Henry Ward Beecher
Inside Isaac's journal was a lengthy newspaper clipping which described how to keep a journal.  The author of the article was Henry Ward Beecher, a Congregationalist minister, social reformer, and abolitionist.  Today his sister, Harriet Beecher Stowe, is probably better known, for she is the author of Uncle Tom's Cabin, whom Abraham Lincoln addressed as 'the lady who started this war,' when they met.  However, during his life, Harriet's brother Henry was also widely known.
Henry had his own encounter with Lincoln, who heard him preach.  Beecher advanced the Union cause on a speaking tour through England during the Civil War, and when the flag was again raised over Fort Sumter near the end of the Civil War, he was the primary speaker.  Beecher lived in a time when eloquent preachers could become celebrities, drawing crowds to their services and becoming acquainted with other well known people.  After hearing Rev. Beecher preach, Mark Twain described his performance as "sawing his arms in the air, howling sarcasms this way and that, discharging rockets of poetry and exploding mines of eloquence, halting now and then to stamp his foot three times in succession to emphasize a point."  Even if Twain was guilty of his well-known exaggerations, Beecher must have been a forceful speaker.  Using his celebrity to speak out for causes, Beecher supported women's suffrage, temperance, and Darwin's theory of evolution.
The pastor of Plymouth Congregational Church in faraway Brooklyn, New York had a significant role in early Kansas.  Before the Civil War, Beecher raised money for the early settlers in Kansas and Nebraska who were willing to oppose slavery, using the money he raised to buy them rifles.  Consequently, the guns acquired the nickname of "Beecher's Bibles."
Hold yourself responsible for a higher standard than anybody expects of you.  Never excuse yourself.  Henry Ward Beecher
Even the scandal involving accusations of improprieties with a female member of his church, the wife of his friend, did not extinguish Beecher's celebrity.  The Plymouth Church Board of Inquiry exonerated Beecher but excommunicated the woman's husband, and a second Board of Inquiry two years later excommunicated the woman as well.
Whether Isaac was aware of the scandal is unknown, but he respected Beecher's opinion well enough to have clipped an article written by Beecher from the newspaper to save in his journal.  Beecher counseled against filling a personal journal with feelings and opinions, recommending that a journal should be a record of specific events--of weather, people seen that day, and how time was spent.  The clipping in Isaac's journal is undated, but Beecher's advice would indicate that the opinions and emotions of a young man shared in Isaac's journal entries of 1870-71 were before he read Beecher's newspaper column, and the entries of 1884-1891 when the journal resumed were influenced by Beecher's advice to stick to facts. 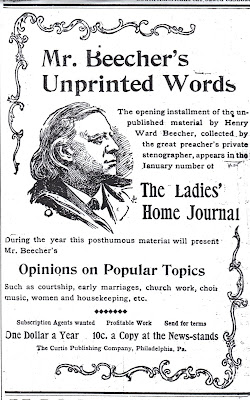 Journaling may have been a Werner family tradition.  His twin brother Henry Beckley Werner also kept a diary, which was donated to Albright College in Reading, Pennsylvania by Henry's son, Charles Hain Werner.  The diary entries may be read at http://library.albright.edu/casc.  It was very interesting for me to compare entries from 1871 from both twin brothers' journals, particularly the entries about brother Henry Werner's travels to Virginia.
Even after Henry Ward Beecher's death in 1887, his advice was available to people, as can be seen from the advertisement taken from the County Capital newspaper to which Isaac subscribed.  Posthumously, Beecher was still dispensing advice on "courtship, early marriages, church work, choir music, women and housekeeping."  Frankly, I wonder what Rev. Beecher had to say about housekeeping!  The very thought of Henry Ward Beecher delivering his opinion to women readers of the Ladies Home Journal on the subject of housekeeping calls to mind Rev. Beecher's own words.
A person without a sense of humor is like a wagon without springs.  It's jolted by every pebble on the road.  Henry Ward Beecher﻿

He no doubt wasn't the first preacher to be involved with a parishioner and he certainly wasn't the last.