Political Symbols on the Prairie 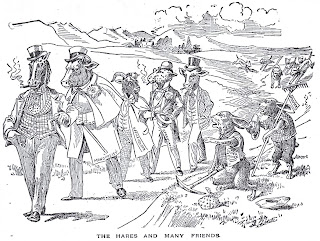 All Americans are familiar with the elephant and the donkey as symbols of our two leading political parties, but do you know the origins of those two animals as party symbols?  Animals were often used in political cartoons to satirize individuals and groups.  One of my favorite cartoons from the County Capital during the 1890s appears at the right.  (Remember, you can click on the images to enlarge them.)  The poor farmers and miners who were suffering such hard times are depicted as hares or rabbits, appealing to the wealthy and powerful for help.  Those well-dressed animals ignoring their pleas are: politician as horse, monopolist as bull, office holder as goat, speculator as sheep, and money lender as cow.  Fierce dogs, labeled famine, want, and other hardships, threaten the defenseless rabbits.


The origin of the donkey as the symbol of democrats is traced back to the 1828 presidential campaign of democrat Andrew Jackson.  His opponents called him a "jackass" for his populist views, but rather than being offended, Jackson adopted the image of a stubborn donkey in his campaign posters.  Cartoonists, especially Thomas Nast, picked up the association of a donkey representing democrats, and the image continues to this day. 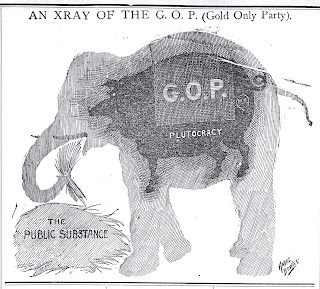 It is believed that a cartoon drawn by Nast that appeared in Harper's Weekly in 1874 was the first use of an elephant to represent the republican party.  My favorite from the County Capital depicting the elephant as a political symbol appears at the left.  The People's Party, which the newspaper and Isaac supported, saw republicans as the wealthy and powerful, gobbling up benefits through their influence over politicians in Washington and the state capitols.  This cartoon uses not only an elephant but also adds a greedy pig inside, labeled "Plutocrat" and wearing a blanket labeled "G.O.P." or Grand Old Party, another name for republicans.  The hay the elephant is consuming is labeled "The Public Substance."


The symbol used by the County Capital for the People's Party was the rooster.  The crowing rooster pictured at the right appeared on the front page of the newspaper announcing a near sweep of state and local elective offices, the editor's visual boast covering about half the page! 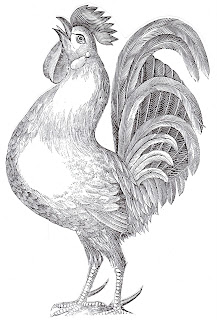 Although there is no doubt that in Stafford County, Kansas, the rooster represented the People's Party, researchers believe it sometimes was used to represent democrats.  An article appearing in the 1913 Journal of American History traces the origin to 1834 in Indiana when a man named Joseph Chapman ran for office.  Apparently Chapman was quite an orator, and his style of boasting about what he would accomplish if he were elected was described by his opponents as "crowing," giving him the nickname of "Crowing Joe."  http://www.newrivernotes.com/old_nrn/misc/rooster.htm   Another researcher traced the connection of a rooster with democrats in West Virginia.  In that state, voters were urged to "Scratch the Rooster," meaning to put an "x" below the rooster symbol to vote a straight democratic ticket.  http://morganmessenger.com/news/content/story-10302


All of that may be true, but at the St. John, Kansas, County Capital newspaper, the rooster crowed for the People's Party.
Posted by Lynda Beck Fenwick at 11:54 AM