Our small hometown is very fortunate to have a wonderful public library.  During an Open House at the library, I noticed a shelf of books the library was selling to raise funds.  The title, "The First Battle," caught my eye, along with the author's name of W.J. Bryan.  I opened the cover to find a yellowed check-out form with not a single stamp to show that the book had ever been checked out since its acquisition by the library.  Handling it carefully because of its fragile condition, I was amazed to discover a book written by the 1896 presidential candidate of both the Democrats and the People's Party, William Jennings Bryan, and published the same year of that  failed candidacy.  I bought it to add to my research materials of the late 1800s.
In an unusual Preface to the book, Bryan's words are presented in his own handwriting.  In part, they read:  "The campaign of 1896 was a remarkable one whether we measure it by the magnitude of the issues involved or by the depth of interest aroused.  I have been led to undertake the present work by a desire, felt by myself and expressed by others, to have the more important incidents of the campaign put into permanent form for the convenience of those who have taken part in the contest and for the use of those who shall hereafter desire to review the struggle.  The amount of work done by the advocates of free coinage is beyond computation and the number of those who took an active part in the contest to [sic] great for enumeration..."  Included in the book are not only texts of speeches and other documents by Bryan but also documents of other men instrumental to the Silver issue, the primary theme of Bryan's 1896 candidacy. 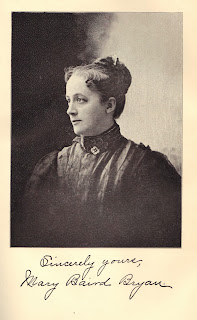 In another rather unusual decision, Bryan chose his wife to serve as his biographer, inserting her brief genealogy of his family and following that with her personal biography of her husband's life.  She recorded his birthday of March 19, 1860 and his family's move from Salem, Illinois, to a 500 acre farm outside of town when Bryan was five.  He entered public school at the age of ten and attended there for five years before entering Whipple Academy, the prep school for Illinois College at Jacksonville, IL, where he remained for eight years, acquiring a classical education.  He met his wife, Mary Baird, in September 1879, while they were both students in Jacksonville, (she attending a school for young ladies), and having graduated from college, he entered Union College of Law in Chicago in the fall of 1881.  He began his legal practice on July 4, 1883, and he and Mary wed on October 1, 1884.
As for his political biography, he first became interested in politics during his father's Congressional political campaign of 1872, and according to Mary, "...from that time on he always cherished the thoughts of entering public life."  It was the summer of 1887 when legal business took him to Kansas and Iowa, that he made a side trip to Lincoln, Nebraska, and was so impressed with the prairie town that he decided to move to Lincoln and begin a legal practice with a former classmate from law school.  That practice commenced on October 1, 1887, and Bryan immediately became active in Democratic politics in Nebraska.
With his handwritten Preface and his wife's biography having opened the book, Bryan begins his own text with this title to Chapter 1:  "My Connection with the Silver Question Begins."  There is no question that Bryan's political career was built on identifiable issues and skills.  Perhaps foremost was his formidable skill as an orator; without question his principal political issue was Free Silver; and underpinning his reputation was his strong reputation as a Christian man.  His career is bookended by the "Cross of Gold" speech at the Democratic convention of 1896 that probably led to his selection as the party's presidential candidate (See my blog "The People's Party Urged Silver, July 18, 2013) and it essentially closed with the so-called "Scopes Monkey Trial" of 1925.
﻿﻿Bryan was well known for lacing his oratory with frequent Biblical references and quotations, just as he did in his stirring challenge to the Republicans not to "press down upon the brow of labor a crown of thorns" nor "crucify mankind upon a cross of gold."

﻿
It was surely that reputation that influenced his selection as attorney for the state in The State of Tennessee v. John Thomas Scopes in which Clarence Darrow, the famous defense attorney, was hired to defend school teacher, John Thomas Scopes.  The highly publicized trial became a contest between those who believed the Bible took priority over all human knowledge and those who believed evolution could be reconciled with matters of faith.  The Tennessee law made it illegal for any state-funded school to teach evolution, and with two such famous lawyers representing opposing sides, the trial was covered by newspapers far beyond Dayton, Tennessee.  Bryan won, with Scopes found guilty and fined $100, (although the verdict was overturned); however, Darrow took the unusual tactic of putting Bryan on the witness stand as an expert on the Bible, and Bryan's testimony left him feeling humiliated and exhausted.
﻿


While those two events probably bookend his reputation today, in his own lifetime he was well known for  many distinguished achievements.  Not only was he chosen in 1896 as the presidential candidate of both the Democratic and the People's parties, he was chosen as the Democratic presidential candidate again in both 1900 and 1908.  He was the Secretary of State under President Woodrow Wilson (1913-1915), and people were willing to pay to hear him speak to the extent that he supported his family from speaking engagements for many years.  Despite his achievements, Bryan's star was never again so high as during the 1896 presidential election, and many believe that L. Frank Baum's depiction of the Cowardly Lion in the Oz book published in 1900 was intended to caricature and ridicule Bryan.

By the time of the 1896 Presidential election in which Bryan first ran, Isaac was no longer living; however, the Silver issue was the controlling question for the People's Party even before Isaac's death, and there was no greater champion of that issue that William Jennings Bryan.

I wish both the "Atheists" and the "Christians" would take a hike on the whole business of evolution vs creation. They are not in the least exclusive. One concerns "Who" and "Why", the other "How".