Isaac Werner loved the wild flowers that covered the prairie with color every spring.  As for the prickly poppy, which blooms from June through September, he made no mention of it in his journal.

The delicate, ruffled petals of the prickly poppy, and the silvery green of their prickly leaves are rather pretty, but having them in a pasture is a nuisance.  Cattle will not eat them, and they will crowd out other desirable plants. 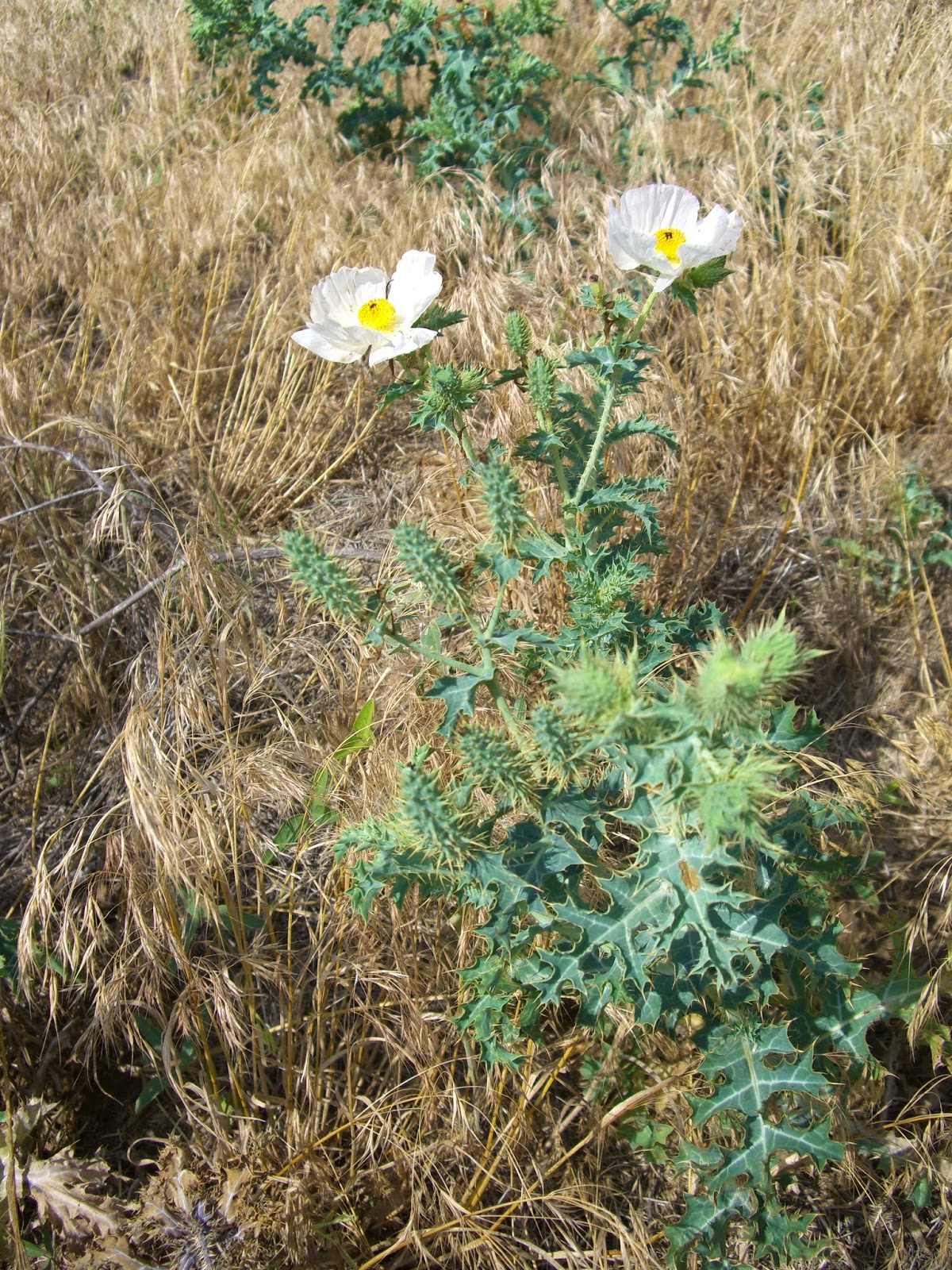 The plants can grow from 1 to 5 feet tall and are a common plant on the prairie, growing most abundantly in sandy soil.  The presence of these poppies in pastures is often indicative of overgrazing.  They may also be found in flood plains and in locations where the soil has been disturbed.

My father hated prickly poppies.  In the summers, when I was not in school, he would find jobs for me to do around the farm.  To show just how much he wanted to rid the pastures and field edges of these plants, one summer he proposed paying me twenty-five cents for every prickly poppy I pulled, a more generous payment than I received for other tasks.  However, to collect my bounty I had to show the roots dangling from the plant in order to prove that I had pulled the entire poppy so that it would not grow back from roots left in the soil.  That was difficult and uncomfortable work, and I don't remember collecting much money that summer.

My father nearly eradicated the plants, for he would pause to pull them up by the roots whenever his path crossed one of the poppies.

Native Americans, however, valued the bright yellow sap as a dye for arrow shafts and as a wart removal.  They crushed the seeds to treat burns, cuts, and sores, and they also boiled the plant and used the liquid to treat sunburn.

To learn more about Kansas Wildflowers & Grasses, you may visit the Kansas State University Library at http://www.kswildflower.org/flower maintained by Mike Haddock, who is credited for some of the information in this blog.
Posted by Lynda Beck Fenwick at 6:30 PM

This plant is new to me, likely doesn't grow that far north. Lovely flowers but I can see where it might not be too popular. Nature does not like bare ground and if over grazing is a problem, will replace the missing grass with plants that are less likely to be eaten.

Shared via e-mail: My father had a thing about cockleburs (Xanthium pennsylvanicum). The flowers are unisexual--we never spoke about that--and bloom from August through October. It's the distinctive seed pods or burrs that make this plant easy to identify. The seeds and seedlings are toxic to humans and animals. The burrs are brown, about 1" long and are covered with stout, hooked prickles, tipped with 2 hooked spines! The burrs contain 2 seeds, the lowest one germinates immediately and the other one can sprout up years later. Early growth season control was important so, as very young girls, were seeking the toxic newly sprouting baby plants. We would be left by the roadside to pull (roots and all) the small plants and deposit them in the gunny sack we each dragged across the field. The expectation was that we would trudge the mile-long field and meet Mother at the other end by lunch time and go home, in town, for lunch. We sang, swatted biting flies and an occasional bee, talked loud and thought to ourselves as the hours passed and the Kansas sun bore down on our hats and long sleeved cotton shirts. We drank cold well water and "Hawaiian Punch" from a thermos or Mason jar. It was just what [one] famer's daughters did to earn their keep before they were old enough to drive a tractor! Now it's all a sweet memory and a google search to once again see that dull green leafed plant with "overly sexual" flowers! Thanks for bringing bnack the memory!

Thanks to a friend for sharing her cocklebur story...not too dissimilar from my own memory, except that my father just tempted me with quarters to pull the prickly poppies...and I wasn't adequately tempted!