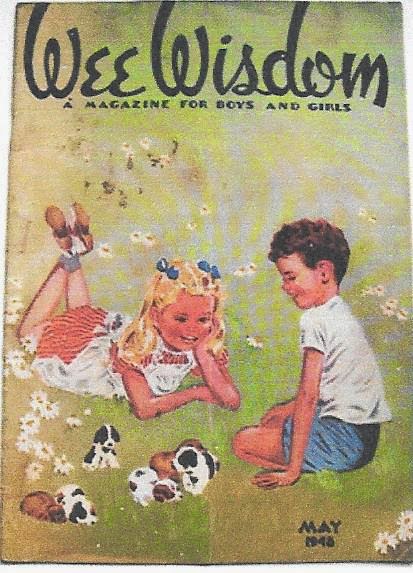 Some books read in the innocence of childhood raise complex issues today.  Helen Bortz remembers:  "There was a series of stories that appeared in issues of 'Good Housekeeping' magazine.  Little Brown Koko [was] authored by Blanche Seale Hunt and illustrated by Dorothy Wagstaff..."  The 'Biographical Dictionary of Kansas Artists,' compiled by Susan V. Craig, Art & Architecture Librarian at the University of Kansas, includes Dorothy Wagstaff Arens among Kansas artists active before 1945.  Using the professional name of Dorothy Wagstaff, she specilized in illustrating children's books, and the image at left from "Wee Wisdom" magazine is an example of her work.  She studied at Washburn College and taught at the Topeka School of Art.

She is best known, perhaps, for her illustrations for Little Brown Koko, and the image of a dust jacket cover of the book by that title appears below. 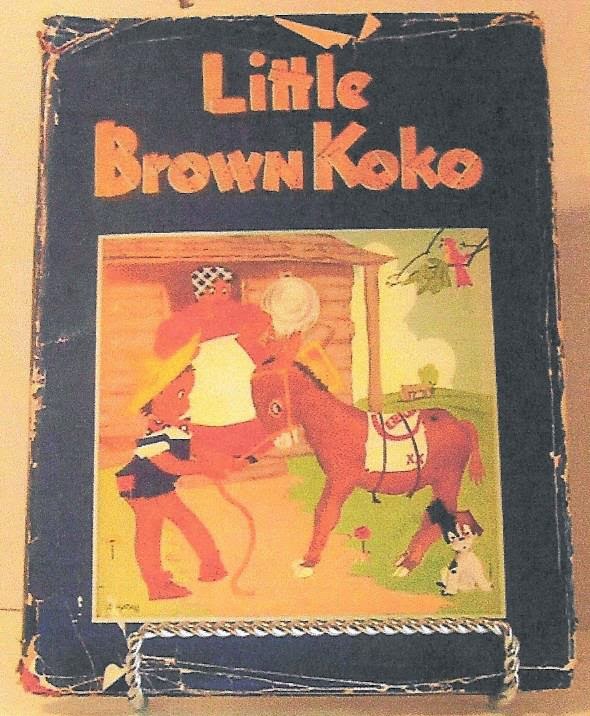 The online seller of the pictured book described the author, born in 1912 in Florida, as an author, teacher, and postmistress.  There were six Little Brown Koko books, which together sold 600,000 copies.

Obviously this was a popular book in its time, and children who loved it, as well as parents who bought the book for their children, almost certainly did not think of themselves as racists.  Nor do those who continue to remember the book from their childhoods fondly.

However, writer Stephanie Beecroft Moore, wife of a Black man and mother of two bi-racial children, points out the unintentional hurt these books and images can cause.  She acknowledges that her husband does not share her degree of sensitivity to what she describes in her essay, "The Accidental Racist."  While she believes "that most people are good, that they believe in equality and justice," she regards the oppression of people of color as "so deeply-embedded in our culture, it is impossible to remain uninfected."  As one example of unintentional hurt, she cites finding Little Brown Koko at her children's school book sale.


Rodney Smith remembers reading The Story of Little Black Sambo, written in 1899 by English author Helen Bannenman.  I believe my own family had that children's book, as I am sure many families did.  The book was a favorite well into the mid-20th century.  Today many people find the book offensive, and Sambo is regarded as a racial slur.

Ferris State University in Big Rapids, Michigan is home to the Jim Crow Museum of Racist Memorabilia, "using objects of intolerance to teach tolerance and promote social justice."  Curator David Pilgrim has written about the fact that for many White Americans, stories like Little Brown Koko, Little Black Sambo, and Epaminondas and His Auntie are just 'cute stories.'  Pilgrim writes:  "I am ambivalent about removing books like Epaminondas and His Auntie from public libraries.  I find the book offensive.  ...However, I do not support top-down censorship.  I do see the value of having racially offensive objects in the public so the objects can be used as tools to facilitate healthy, sometimes painful, dialogue."

Although there was a community of Exodusters, former Southern slaves who had come to Kansas, living not far from Isaac, his journal mentions only a Black laborer who worked for a neighbor and a Black speaker from Topeka who spoke in St. John.  His journal entries about both men were as straight forward as any other comments about people he encountered, revealing no bias.  Yet, he did note their color in the journal entries.

Perhaps the issue of racism is more apparent in these books from decades ago, but if we pause to reflect on other childhood books that we remember fondly--the depictions of Native Americans, roles for young girls, the 'perfect' mother or father, and stereotypes about other nationalities as examples--we would surely find offensive depictions.  Our continued affection for the books we read and loved in a different time does not necessarily reflect our attitudes today.

Unlike the limited number of comments about Blacks in Isaac's journal, there were several references to deaths of children.  Life on the prairie seemed particularly hard on very young children and women, whose deaths were often related to childbirth.  The early settlers of Isaac's time were not unfamiliar with the loss of family members.  Because death is a part of life, should it be a subject for children's literature?


My older brother was given the book Gentleman Don: The life story of a good dog, and when I was old enough to read it, that book became a favorite.  When our childhood possessions were divided as adults, Gentleman Don naturally went to my brother.  I never forgot it, and a few years ago I found a copy online for my own book collection.  When I read it as an adult, I wondered why it had held such appeal for me.  Published in 1910, the book is very Victorian and deals with death, loss, and abuse in ways I did not remember.  Yet, I had loved it.

I thought of that recently when I visited one of my favorite websites, "brainpickings.org" and found an article by Maria Popova titled "Consolation for Life's Darkest Hours:  7 Unusual and Wonderful Books that Help Children Grieve and Make Sense of Death." She began by quoting Neil Gaiman:  "If you are protected from dark things, then you have no protection of, knowledge of, or understanding of dark things when they show up."

Among the "unusual and wonderful books" described in the article is one titled The Flat Rabbit, in which a dog and a rat discover the flattened remains of their friend, a rabbit, which has been run over by a car.  The two friends develop what they see as a fitting memorial for their friend, and in the process reflect on life and death.

Another one of the books is We Are All in the Dumps with Jack and Guy by Maurice Sendak, who is known for his unorthodox stories for children.  This story deals with poverty, sickness, homelessness, and kidnapping--obviously frightening subjects for children.
Not every parent might want to have their child reading books dealing so directly with difficult subjects, but if you are interested in reading more, you may visit www.brainpickings.com, a weekly blog that offers interesting reviews of books for adults, and occasionally for children, dealing with a wide range of topics.


I'm not sure whether my parents knew the contents of Gentleman Don.  Many parents today make an effort to be aware of what their children are reading.  Fairy tales were a popular choice among those who shared their favorite childhood books for this blog, and when you reflect on the kidnapping, imprisoning, injuries, poisonings, and other events in fairy tales and nursery rhymes, they are pretty gruesome.  Death may seem like an inappropriate subject for children's books; yet, not everyone would agree.  From the favorites mentioned by followers of my blog, they were not traumatized by the childhood books they mentioned, although their choices sometimes dealt with mature topics.

I appreciate all of the comments and e-mails I received, and I think each one was valuable and of interest to those who have been following my blog series of favorite childhood books.  Several books were favorites of many, while other books were uniquely important to only one person who responded  The books were of wide variety, with a variety of themes.  Thanks to each of you who shared your favorite books and the stories about your childhood reading.  It has been a wonderful opportunity to reflect and remember!
Posted by Lynda Beck Fenwick at 7:32 AM

'the oppression of people of color as so deeply-embedded in our culture, it is impossible to remain uninfected'. We can sort out the Little Black Sambos and Little Brown Kokos, and eat Brazil nuts, catch tigers by the toe, refer to a certain famous cowboy as Black John Ware and understand Huckleberry Finn as a product of his times. But until we understand just how bred in the bone white privilege is, it is hard to erase rascism in our own lives. This was a good post and should lead you into another series.

Thank you for your comments. I hope this is a good final post to the "favorite childhood books" series to share the opportunity to reflect on how books take their meaning from the experiences each reader brings to the book. Perhaps society is becoming more aware of experiences beyond their own and can gain a greater sensitivity to what we read, do, and say.