Most Kansans know about the Lewis and Clark Expedition begun in 1804, the year after the Louisiana Purchase.  The Expedition started up the Missouri River in the spring, and after five weeks they paused to make camp in the area which became Kansas City, KS.  They continued their expedition up the Missouri River, traveling the river boundary which became the northeast corner of Kansas.

Less well known is the Pike's Expedition, which began in 1806 under the leadership of a young army lieutenant named Zebulon Montgomery Pike.  His purpose was to ascend the Missouri River and upon reaching the area which became Kansas, to visit Indian tribes.  His intended path was to continue into New Mexico, turn south to encounter the Red River, and then travel on the Mississippi to St. Louis, from which his journey had begun. 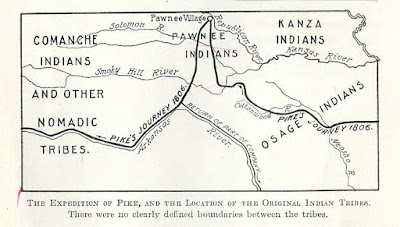 He fulfilled his mission of visiting Indian villages, beginning with the Osage tribe, from whom he bought supplies.  Next he visited a Pawnee village that had previously been visited by Spanish troops.  The story is told that Spaniards had gifted the villagers with blankets, saddles, bridles, and other gifts, including Spanish flags which flew over the village.  Pike demanded that those flags be removed, but the demand was not immediately fulfilled.  Eventually the old chief laid the Spanish flag at Pike's feet and the American flag was raised over the Chief's tent.

Pike's Expedition headed into Colorado, 'discovering' the great bald peak that now bears Pike's name.  They went south into Spanish territory and were taken prisoner for a time, until being escorted to the American frontier and released.  The Pike's Expedition took a year before returning to St. Louis as ordered, and although their expedition may be less well known, they returned with much valuable information about the territory that became the state of Kansas.

Isaac B. Werner came to Kansas in 1878, seven decades after these early adventurers.  Their expeditions acquired the information that informed and mythologized the area which later attracted settlers.
Posted by Lynda Beck Fenwick at 10:02 AM