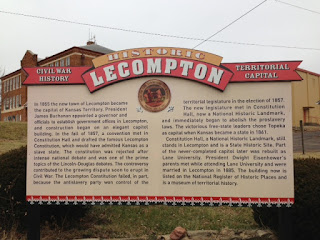 Most people know that Topeka is the state capitol of Kansas.  (See "A Kansas Treasure," 10-15-2015 in the blog archives.)  However, they may not know that other places made their own claims to that title.  The first territorial capitol was designated in 1855 by  Governor Andrew Reeder, who selected a site away from the pro-slavery influence of Missouri.  The legislature, having been elected with the help of Missourians who crossed the border to vote, expelled the antislavery members and passed their own bill to move the government to Shawnee Mission,  near the Missouri border.  The maneuvering between the anti-slavery governor and the pro-slavery legislators resulted in a confusing history, but the site near Fort Riley military reservation that was selected by the Governor is now regarded as the First Territorial Capitol Historic Site.

Also in 1857, a free-state constitution was drafted, but it was never given serious consideration by Congress.  Next came a second constitution written at Lecompton, which sought admission of Kansas as a slave state with Lecompton as the capitol.  Free-state legislators refused to vote on that constitution, which was followed by a second election in which pro-slavery legislators refused to participate.  While that confusion was being considered, a third constitution was drafted in Leavenworth in 1858, which also failed to get congressional approval.  By 1859 the free-state faction was in control, and they drafted a document that barred slavery and fixed the present boundaries of the state.

This fourth constitution ultimately was accepted, but not without difficulty.  The House of Representatives voted to admit Kansas as a state, but pro-slavery power in the Senate caused refusal of the constitution that had been sent by the people of Kansas to Congress.  The Republican platform of 1860, under which Lincoln was elected, had a plank for immediate statehood for Kansas.  The secession of Southern states from congress removed the opposition to admission of Kansas as a free state, and Kansas became the 34th state admitted to the union on January 29, 1861.

The University was founded in 1865 by Rev. Solomon Weaver and named after U.S. Senator James H. Lane, a free-state leader.  Having been first located in the former Rowena Hotel, the university was given 13 acres that included the foundation of what was initially intended to be the Territorial Capital building when the pro-slavery faction had controlled Lecompton.  The university built on the south half of that foundation in 1882 after the property was donated to them by the state.  President Dwight D. Eisenhower's parents met at Lane University when they were both students there.  The university merged with Campbell College in 1902.

Posted by Lynda Beck Fenwick at 9:15 AM