On October 20, 2016, my husband and I had the privilege and pleasure of joining our family to celebrate the 100th birthday of our dear Aunt.  On her birthday friends in the community where she has spent her adult life waited in line to wish her Happy Birthday.  Some times during the 3-hour reception the line extended outside, and although she hated seeing their long wait, she wanted to let each person know how much she appreciated their having come.  One of those waiting was a baby only a few days old, one hundred years separating their births!

The next afternoon family members gathered for a second day of celebration and photographs.  The mother of one son, she now has three grandsons, two great grand sons, and two great granddaughters, the youngest of which is 95 years younger than her great grandmother.

She is an accomplished painter in oils, and some of her paintings were displayed.  We selected an art book as one of her gifts, but another gift was truly a gift from my heart.  My mother had begun embroidering a pair of pillow cases, one of which I finished for Mother.  I remembered the remaining unfinished mate to the pair and finished it for our aunt, in effect giving her a gift from both my mother and me (although Mother died six years ago), completed with thread from my collection which includes thread from my husband's mother and grandmother--our aunt's sister-in-law and mother-in-law.

We also found a 70+ year old photo of her and her husband with a group of family and friends.  We made copies to share with the family, and although she could not recall seeing the photo, she did recall the day it was taken.
The family gathered in a circle to share fun memories we recalled about her.  Music has always been an important part of her life, including giving piano lessons and playing piano at her church.  My husband recalled the memory of his Aunt as his piano teacher--a short-lived experience.

However, he particularly wanted her to share her memories concerning all of the changes she had seen in her lifetime.  She remembered how excited everyone was by the news that Charles Lindbergh had flown across the Atlantic, although as a 10-year-old girl she did not quite understand the achievement of Lindbergh having left Roosevelt Field on May 20, 1927 to fly alone across the Atlantic and land at LeBourget Field near Paris 33 1/2 hours later. 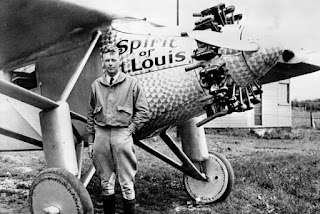 She continued by recalling how her father had taken her to see Charles Lindbergh when he came to Atlanta on October 11, 1927.  She remembered standing in the crowd watching him land at Chandler Field in Hapeville (near Atlanta) at 2 p.m. on a drizzly afternoon to be welcomed by a crowd--in which a father and a little girl not quite eleven stood.  Lindbergh was welcomed by Atlanta Mayor Isaac H. Ragsdale and Georgia Governor Lamartine Hardman and was taken to Atlanta where a parade was held with 20,000 people gathered along the route.

Her memory may not have included specific dates, but she definitely remembered the excitement of his flight and the experience of going with her father to see Lindbergh's return to Atlanta, the city where her family lived prior to their move to Kansas.

She also recalled both of her brothers having served in W.W. II.  With the experience and wisdom of age, she reflected on how her parents must have worried until the boys were safely home again.  She admitted that she was a young teacher at the time and loved her brothers very much, but it was not until she was older, with a family of her own, that she could truly understand her parents' feelings.  Later, she married a young man who had also served his country, and she enjoyed telling us how her father had a hand in playing matchmaker!


It was a very special occasion for her and all of her friends and family, but it was also an excellent reminder that not all of our history is to be found in books.  Just as past blogs have included information about the preservation of old photographs, this blog reminds us how important it is to listen and record the memories of family members. In a fast-changing world, we do not need to be 100 years old to have memories of things our children and grandchildren will never experience.  Share your own experiences and record the memories of other family members before they are forgotten!

Posted by Lynda Beck Fenwick at 9:08 AM

I was excited to see the picture of the Byers Band. My mother, Elizabeth Jeanne "Jeanne" McMillan Wilson was born in Byers, Kansas in 1921. I stopped there once and was dismayed at all that left of the community. It was nice to see that at another time there was enough people to fill the spaces in a band. Makes for a better picture of my Mama's birth place.

Thank you Lyn for including the picture in your blog.