Freedom of Speech and Accurate News 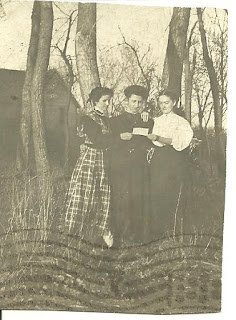 Imagine living in a time and place before internet, before television, even before radio.  Then, imagine you were living on a homestead claim far from the nearest town.  How did news spread?  In Isaac's community it spread by word of mouth and by newspaper.  In the rural community where Isaac lived he had many neighbors within a few minute's walk, and the 'grape-vine' was quite effective.  In addition, there was a rural mail carrier to deliver letters and newspapers, as well as the farming journals to which Isaac subscribed.  Freedom of speech and the press were alive and well!

Yet, because of such Constitutional protection, the accuracy of what was published was subject to little or no regulation.  Newspapers, not to mention Isaac's local neighbors, had their own bias which colored their news.  On the other hand, the close proximity of neighbors provided not only the rapid disbursement of gossip and rumor but also the opportunity for what is sometimes called "a marketplace of ideas," the result of many diverse opinions allowing a collective consensus to be reached, the theory being that neighborhood conversations will begin to form a generally accepted point of view, wise or foolish as it may be.  In most communities, including Isaac's own, respected leaders emerge, and their comments carry more weight, sometimes so much weight that no opposing opinions gain any traction.  Yet, then as now, freedom of speech allows anyone with an opposing point of view to express it, if he dares.

When the progressive movement reached Isaac's community, the strongly Republican neighborhood split, about half adhering to their Republican opinions but the other half (drawn from both old parties but particularly former Democrats) giving Populism a try.  In one 7th district state election two popular men ran against each other, and the People's Party candidate won locally by a single vote, neighbors almost equally divided.  There was extensive back-and-forth between the St. John News and the County Capital during the campaigning!

The written press of Isaac's time did not worry too much about balanced reporting, and their bias was clear.  However, there were many newspapers, and if one got its facts wrong there was probably another one who would call them out.  The government stayed out of it!

With the arrival of radio and television, it was necessary for stations to acquire broadcasting licenses, and the airways did not allow for the same proliferation of stations that news print had allowed.  The Federal Communication Commission (FCC) decided that it was important that stations given broadcasting licenses be honest, equitable, and balanced in their reporting.  In 1949 they imposed the Fairness Doctrine.  Broadcast license holders were required to present controversial issues of public importance to accommodate an informed public and those issues had to be presented accurately, fairly, and in a balanced manner.  The information could be presented through news, editorials, or shows, and opposing views did not have to receive equal time, (the equal time requirement relates to political candidates), but the purpose was to give the public a diversity of information.  Although the United States Supreme Court had ruled favorably on the Constitutionality of the Fairness Doctrine, in 1987 the FCC abolished the doctrine.  It is widely believed that Ronald Reagan instigated the revocation, and three of the four sitting FCC commissioners at the time of revocation had been named by President Reagan, the fourth having been named by Richard Nixon.

Subsequent efforts to reinstate the Fairness Doctrine have all failed, one effort in 2007 having been opposed in the House by the current Vice-President, Mike Pence; however, President Obama also opposed the revival of the Doctrine during his time in office, and it was during Obama's presidency  that the language that implemented the old Fairness Doctrine was removed during a broader editing of the Federal Register.  The abandonment of the Fairness Doctrine has not been decided by which party occupied the White House.

Journalism is a profession, and reputable journalists strive for accuracy in delivering the news.  In modern times, the traditional thinking has been that people want to know the truth, and careless or one-sided coverage of the news would result in loss of viewership and subscribers.  That economic reality was assumed to keep reporters honest, even if their sense of professional ethics did not.

Recently, however, the question has become whether it is truth or affirmation of viewers' bias which determines economic success for the news media.  The importance of a free and independent press capable of delivering accurate news to Americans has been considered so important that the press is sometimes called the "Fourth Branch" of our government.  Presidents of both parties have had their quarrels with the news but have also used the media to their advantage at times.  Presidents have always understood the important role of the press in our government, but perhaps that role has never been more debated than it is today.

Next week's blog will take a look at just how complicated changing technologies are making things.

Posted by Lynda Beck Fenwick at 9:32 AM