What Else May You Be Missing in Kingman?

In previous blogs I have mentioned outdoor mural art and indoor post office art, from both of which history can be learned.  Kingman, Kansas offers both examples.  In a previous blog I featured the two murals by Stan Herd on the north outside wall of the Main Street Kingman County Historical Museum.
Just across the street from the Museum is the Kingman Post Office.  Kingman is one of those lucky towns whose post office contains art commissioned by the U.S. Treasury Department Section of Painting and Sculpture.  Kingman's painting, "In the Days of the Cattlemen's Picnic," was done in tempera by Jessie S. Wilbur. 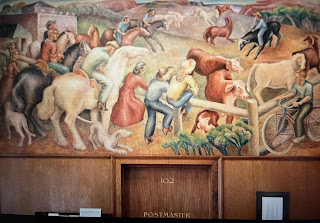 Because I have already posted a blog about the commissioning by the U.S. Treasury Department Section of Painting and Sculpture during the 1940s, I will mention that only to date Jessie Wilbur's painting as being done in 1942.  At that time, she would have been 30 years old and would have completed her study of art at Colorado State Teachers College.
Initially, she became interested in cubism, which held her interest for many years, but later she became interested in impressionism.  However, it was as a printmaker that she became best known.  None of these styles dominate her painting in the Kingman Post Office, but her inclination toward a more modern style of painting can be seen.
She did not rely entirely on her paintings for income but rather taught at Colorada State for a few years before going to Montana State College in Bozeman, Montana, where she also taught courses at the Archie Bray Foundation in Helena, Montana.
Many examples of her public art may still be seen. Some of her art is on permanent display in the Jessie Willber Gallery at the Beall Park Art Center in Bozeman.
The next time you travel through Kingman, Kansas, you just may want to visit the Post Office.
Posted by Lynda Beck Fenwick at 7:16 PM