Celebrating Thanksgiving with Pigs and Pigskins

I thought perhaps you have seen enough pictures of turkeys and pumpkins!  Last week's blog thanked all of you for your continued support of my blog and let you know how thankful I am for your ongoing interest in Isaac B. Werner and the history of the Populist movement!

Those of you who are regular followers know just how difficult times were for farmers like Isaac, and he recorded in his journal many Thanksgivings when people had too little to put much of a Thanksgiving Dinner on the table.

However, one year a farmer of better means went through the neighborhood buying up every fat hog in the community the week before Thanksgiving.  He loaded all of the hogs on a train and shipped them East.  His enterprise gave a great many neighbors a little money in their pockets with which to afford a real Thanksgiving dinner.

I doubt if any of them gave up their traditional pumpkin pies for a "Pig Lover's Cake," although I hope they gave a little credit, and perhaps an unspoken thank you, to their poor pigs for their Thanksgiving feast.  Perhaps this year you should raise a toast to all the pigs over the years who gave their skin to producing footballs! 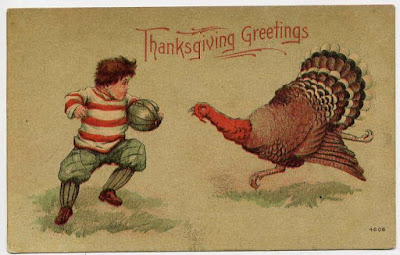 However, one of the all-time great college rivalry games, Texas vs. Texas A&M, came to an end not because of complaints from the women left at home to cook but rather because of money!  A new contract for broadcasting Texas football ended the tradition with the 2011 game.

There have been many such rivalries over the years.  The University of Kansas and the University of Missouri played the first of their 19 consecutive Thanksgiving day games in Kansas City, MO, starting in 1892.  A Conference rule requiring games to be played on college campuses interrupted the tradition, although it was resumed in 1916 and continued into the 1940s.  Gradually college contests on Thanksgiving Day diminished, although many continue the tradition by scheduling games during the weekend following Thanksgiving.

Professional Football teams have played on Thanksgiving from their inceptions.  This year the Minnesota Vikings are scheduled to play the Detroit Lions at 11:30 Central time on FOX; the L.A. Chargers will play the Dallas Cowboys at 3:30 Central on CBS; and the NY Giants will meet the Washington Redskins at 7:30 on NBC.  So, whether your family tradition plans Thanksgiving Dinner at noon, midday, or in the evening, chances are high that somewhere in the house the television will be tuned to a football game.

I'm posting the blog early again this week, since the family cooks will probably be too busy cooking and washing dishes, pots and pans to read the blog tomorrow on Thanksgiving Day, and the football fans will be watching games from noon to nighttime!  Happy Thanksgiving to everyone, wherever you are and however you spend your day.
Posted by Lynda Beck Fenwick at 8:29 AM

Love the Pig Lover's cake. May try my hand at making it.

AM wrote: "I truly enjoy reading your writings re: Thanksgiving traditions of the past and encouraging families to look at old photos (our family does that to help the younger ones know their heritage)."