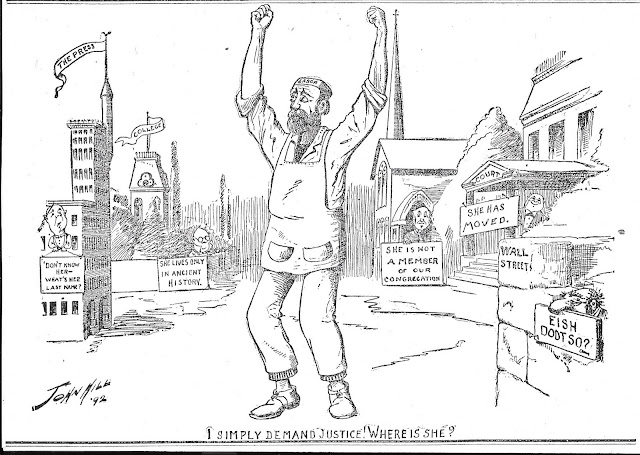 The caption reads "I simply demand 'Justice'!  Where is she?"  The man wears a cap titled "Labor."  Of course, he is asking where Lady Justice has gone.

The structures behind the laborer represent institutions in which Justice would be expected to be found.  Because the print may be difficult to read, I will supply the names of the institutions with the corresponding excuses for Lady Justice not being found in those places.

Unfortunately, the entry on Wall Street is an ethnic slur, intended to represent a foreign accent of the question "Is that so?".  Many in the Populist Movement believed the American economic system was controlled by wealthy bankers in England, and Jewish bankers.  The sign on Wall Street was a reference to that belief. 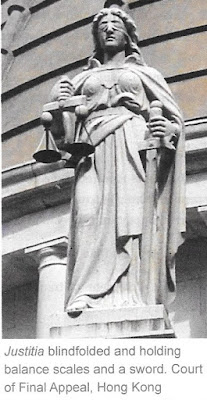 While Populist Movement members included people from many different countries, and the Farmers' Alliance and he People's Party welcomed all workers, the sad fact was that they did not always act as their principles directed them to act.  There was a particular animosity toward Chinese laborers brought to America to do dangerous and onerous labor building the rail lines, who were willing to work for cheap wages in unsafe conditions.  Workers from other countries who took jobs away from immigrants who had arrived decades earlier also caused resentment.  Blacks, freed by the Civil War,  could join populist groups, but often they were relegated to separate clubs.  The discrimination shown other ethnicities is not a proud chapter in the history of populisms.

As for Lady Justice, she is not a symbol unique to America.  In fact, her roots run back to Ancient Rome.  The objects she carries--a balance (scales), a sword, and the blindfold she wears--symbolize  her ability to weigh the balance of the evidence and make her decision without bias; her willingness to fight for what is right; and her impartiality, without regard to wealth, power, or status.  Her image can be found in many different countries.

The laborer in the 1892 political cartoon, who lacks wealth, power, and status, calls out for Justice in his despair, but each institution in which he had hoped to find justice denies his appeal.

Posted by Lynda Beck Fenwick at 8:28 AM