After three straight years of late frosts spoiling the sand hill plum crop, 2019 had a surprise for me...and for a lot of others!  There had been a late, light frost, and I assumed it would be another year without plums, but I was wrong.  Was I ever!! 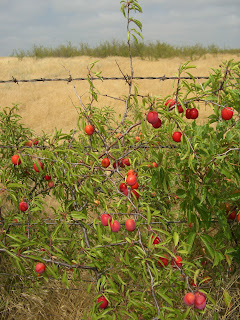 Our pasture, which is unplowed prairie, has not been grazed since my father's death, and the sand hill plums have nearly taken it over.  I picked from the road one morning, where bushes have grown through the wire fence, but the next day my husband and I drove into the pasture to an area of abundant bushes with especially large, ripe plums. My husband had been scouting for the best plums, and without needing to push our way into the bushes amidst all the thorns, we were able to pick enough plums before the morning sun became oppressive.  Since protection from the thorns requires long sleeves and jeans, it gets very hot to pick later in the day.

I made six batches in order to have jelly of our own for a few months and jelly to share with friends. I was the Production Chief, but my husband was the Chief of Shipment and Delivery.  We shared not only with local friends but also with out-of-state friends who had never tasted sand hill plum jelly, and  I used every jelly jar I owned.

We let local friends know that our pasture had abundant plums to share, but this season plums could be seen in pastures and along many roadsides, and only one couple took us up on our invitation to pick.  I heard that some of the local grocery stores had run out of pectin because so many customers were making jelly.
But, this blog is not really about making jelly to enter in the state fair.  The title of this blog post, "My State Fair Jelly" does not refer to entering a jar of my jelly in the Kansas State Fair.  Rather, my jelly entry was made on paper.  Last year I entered a pastel painting in the Professional Artist competition, and I enjoyed the experience so much I decided to do that again.  When I draw or paint I must have a reference, either an actual model or still life arrangement or various photographs from which to work.  Sometimes a single photograph is sufficient, if I know the subject(s) well enough to capture more than the photograph shows.

I began going through my reference images for ideas, and I came across a photograph I had taken a few years ago of canning supplies ready to make sand hill plum jelly.  I decided to create a still life painting using an arrangement of canning supplies.  Unfortunately, I had already discovered that, after my last canning using my Mother's beautiful 1940s canning equipment, I had put her equipment away somewhere that I can't remember.  My own 2019 jelly was made using modern, less picturesque equipment, so I had to rely on several photographs of Mother's equipment, with variations and additions that included a jar of my own jelly, mugs from my collection, and a 'church ladies' cookbook, altered by my imagination but representative of the type of local cookbooks produced during the past mid-century.

I finished with time to get my pastel painting framed, and off to the 2019 Kansas State fair it went, the name for my entry suggested by my husband.

No prize for my work, but I still enjoy the experience of having a goal, showing my work, and participating with other artists.  I confess, it was rather disheartening to hear the judge declare strongly, "I hate still lifes," during the critique of his selections for awards.  One of those winners was a still life, so obviously he was willing to override his "hatred."  There were many wonderful  works by talented artists, and what appeals to all of us is subjective.  I didn't make it back to the Fine Arts exhibit to observe the reactions of visitors, but I'm sure that many of the paintings were appreciated by those who toured the exhibit, and that is, after all, the pleasure we artists enjoy having given others.

Remember, you can click on the images to enlarge.
Posted by Lynda Beck Fenwick at 7:50 PM