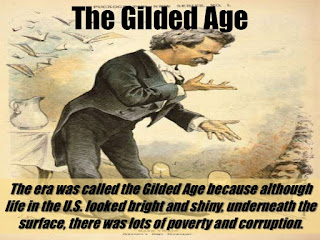 Reform-minded journalist had existed during earlier years of the 1800s, but as the century drew to a close a new crop of journalists known as Muckrakers appeared.  The earlier journalists had been more likely to write their articles for newspapers, but in the late 1800s magazines gained popularity, and longer, well-written stories had a place for publication.  McClure's was one of these magazines, willing to give journalists space to develop thorough examinations of business, political and social abuses in need of reform.  These magazines became known as muckraking magazines, and the journalists, and occasional fiction authors whose stories exposed abuses, were called muckrakers.


The term is attributed to Theodore Roosevelt, who borrowed the term from John Bunyan's Pilgrim's Progress. In that classic, the Interpreter shows Christiana a man who can "look no way but downwards, with a muck-rake in his hand...[raking] to himself the straws, the small sticks, and dust on the floor."  Christiana understands what she is being shown, for the man is so focused on the muck that he is ignoring the Celestial crown being offered to him.  She says, "I know somewhat the meaning of this, for this is a figure of a man of this world, is it not..."

Although most of us have not read Pilgrim's Progress, it would have been familiar to his listeners in 1906 when President Theodore Roosevelt used a reference to the book to criticize journalists who took their investigative writing too far.  The President said, "the men with the muck rakes are often indispensable to the well being of society; but only if they know when to stop raking the muck."

The issue with investigative reporting was then, and continues today, to be judged by whether journalists are an essential check on a free society or are a disruptive nuisance.  The founding fathers understood the importance of freedom of the press to enlighten an informed citizenry.  Unfortunately, the professionalism of members of the press has always varied, from those who speak and write with a commitment to accuracy versus those who distort the truth to intentionally mislead readers or to slander public figures for readers' amusement.

At the same time ethical journalists were producing reform articles, other writers published in so-called yellow journals, hawked stories of scandal, crime, and sensationalism for entertainment and malice rather than purposeful information.  Those publishing motivations continue today.


That is not to say that legitimate journalists should never write stories involving scandal, crime, and sensational facts, whether they were writing in the 1800s and early 1900s or today.  The distinction is that yellow journalism (or what we refer to today as tabloid stories) invent and exaggerate stories with little regard for accuracy, to titillate, shock and amuse readers, in contrast to ethical journalists who seek to report information in an objective, impartial way.  While the facts may still be sensational, reputable journalists rely on accurate sources and avoid exaggeration.  Or, as Roosevelt said, ethical journalists "know when to stop raking the muck."


In Isaac Werner's times, U.S. Senators were not elected by popular vote but rather were chosen by the various elected state senators.  The enactment of the 17th Amendment, which allows the voters in each state to elect their two U.S. senators, had been one of the key demands of the People's Party.  A series of articles written by muckraker David Graham Phillips and published in "Cosmopolitan" magazine in February of 1906 is given significant credit toward the passage of the amendment allowing the people to directly choose their senators rather than having their elected state senators make the choices for them.


The importance that the press has played in digging through the muck of American Society is shown in these few examples, as is the criticism journalists must confront when presidents and other powerful people don't like the muck they uncover.

Next week the series continues.


Posted by Lynda Beck Fenwick at 9:30 AM