The Travels of a Book 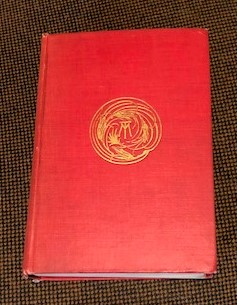 Last week's blog shared Isaac's connection with Mark Twain's The Innocents Abroad, but this week's blog shares a personal story involving  the book.   To gain a better sense of who Isaac Werner was through acquainting myself with what Isaac read, I ordered several books that were in his library, and one of those was The Innocents Abroad.   In selecting the books I ordered, I chose editions published as near the time Isaac would have bought them as possible.  Some of the books date back to the late 1800s, but books published that long ago were not always available.  I had to settle for a copy of The Innocents Abroad from the early 1900s.

It is a beautiful book with a red linen cover and a lovely gold crest of ears of corn encircling the initials "MT."  Some of the books I bought show rough treatment and poor storage, but my copy of The Innocents Abroad is almost like new.  However, its condition was not the only surprise that the book had for me.  On the inside fly leaf was written in pencil:  "Bought in the Mark Twain Country.  Read on "The Alton" St. Louis to Chicago, 12:05 noon October 9, 1932.  On Campaign itinery for Hoover & Curtis, I spoke last night at Hannibal, MO, Mark Twain's town.  There is a memorial group erected there to Tom Sawyer & Huck Finn, the first ever erected to literary characters.  Warren R. Austin."


It will probably not surprise you to learn that my curiosity led me to research who Warren R. Austin was.  Born November 12, 1877, he was an American politician and statesman, a lawyer appointed State's attorney of Franklin County at the age of 25, followed by numerous political roles:  Chairman of the Vermont Republican State Convention in 1908, Mayor of St. Albans in 1909, a member of the United States Court for China in 1917, while also serving as a commissioner for the Second Circuit from 1907 to 1915.  After other prominent positions, he was elected to the United States Senate in 1931 following the death of the prior senator, but was re-elected twice more, in 1934 and 1940.  He resigned from the Senate in 1946 to accept appointment as America's 2nd U.S. Ambassador to the United Nations, a position he held until January of 1953.  He died December 25, 1962.

How Warren R. Austin's copy of The Innocents Abroad came to be available through an online book seller I suppose I will never know, but it is an interesting addition to my library.

That is very interesting. Several of my books have signatures of previous readers but none with that much detail. I shudder to think what living with him would have been like.