A Science Lesson from Mother Nature

A few years ago a visiting friend watched me carrying water to maple and red bud volunteer seedlings I had transplanted and commented, "You are quite an optimist planting seedlings at your age."  Well, I am still planting seedlings!  My husband and I are enjoying the tree rows my parents planted before I was born, which my brother had the responsibility of watering--a coffee can filled with water for each tree--at the age of seven.  He described pulling his wagon with a large container of water and dipping the coffee can into the container to water each tree as he went down the tree rows.  Those trees are getting old, and I fill in the spaces where trees have died with my seedlings so that someone in the future will have a tree row to enjoy as the old elms die. 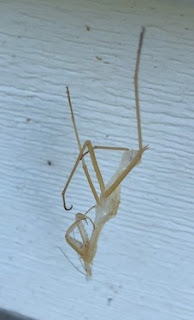 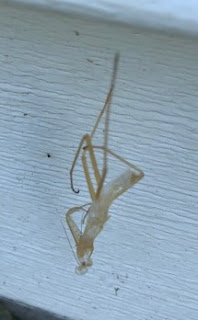 I am probably less optimistic than I was when my friend made his comment, but in the heat of summer I fill my sprinkling can with water from the faucet on the front of the house and make two trips back and forth to the tree row to give each seedling a drink.  Between the squirrels digging the seedlings up, the moles nipping off the roots, and the deer eating the leaves, it is a challenge.


However, it is an excuse to be outside in the cool of the morning, enjoying the birds and the breeze.  This particular morning Mother Nature had another surprise for me.  Dangling from a strip of siding just above the water hydrant was was an odd looking, translucent 'thing.'  Quickly my eye caught another movement, and I saw a bright green walking stick a few strips of house siding higher than the odd 'thing' I had first observed.  Strangely, the translucent 'thing' bore a resemblance to the walking stick.

Of course, I had to take photographs on my phone, and when I finished watering and returned to the house I went on line to investigate what I had seen. 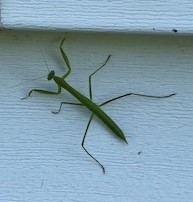 As a curious nature lover, I had seen walking sticks before, although they are nearly invisible in grass and litter, but what I had never before seen was the molting of a walking stick.  What I learned from my research is that the nymphs resemble adult walking sticks but are smaller, and sometimes different in color.  As they grow, they shed their outer skins.  By chance, I had apparently happened upon a walking stick soon after it had shed its outer skin.  Normally the walking stick eats the leftover skin it sheds, but my arrival must have interrupted the walking stick's breakfast.

The nymphs molt on average from 4 to 8 times before reaching maturity.  In addition to their trick of shedding their skin, they can also shed limbs to escape predators and then regenerate the missing limb.  I have always been fascinated by nature, and today's discovery has shown me that we are "never too old to learn."  Apparently, I am also not too old to keep transplanting volunteer seedlings!
Posted by Lynda Beck Fenwick at 7:32 PM

“A society grows great when old men plant trees whose shade they know they shall never sit in.” -Greek Proverb