What Songs Can Reveal

Isaac Werner loved music.  Imagine living on a homestead in the late 1800s without a radio or other means of hearing music any way other than live.  What a treat visiting a friend who could play an instrument or going to town to hear a musical performance would be. 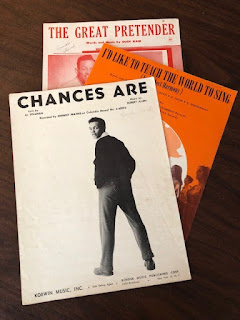 Thinking about that lead me to a reflection on the role of popular songs in our own time and what the hits of each decade can tell about us.  I decided to research the most popular song of the year, beginning in 1950, when "Mona Lisa," sung by Nat King Cole topped the charts, singing "...men have named you, you're so like the lady with the mystic smile.  Is it only 'cause you're lonely they have blamed you, for that Mona Lisa strangeness in your smile?"

A decade later, in 1960, the theme from a movie topped the list with the romantic lyrics "There's a Summer Place where it may rain or storm, yet I'm safe and warm, for within that summer place your arms reach out to me, and my heart is free from all care..." 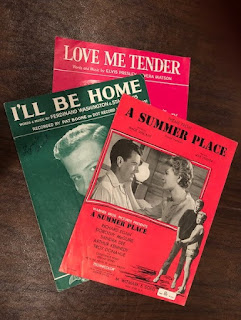 By 1970 the innocence of the past decade was MIA as Viet Nam impacted the nation.  Simon and Garfunkel recorded "Bridge Over Troubled Waters" as their last song in their last album together.  "When you're weary, feeling small, When tears are in your eyes, I'll dry them all.  I'm on your side."

By 1990 the most popular song reflected life's difficulties but urged the person being addressed in the lyrics to "Hold On."  Wilson Phillips sang, "I know there's pain.  Why do you lock yourself up in these chains?  No one can change your life except for you.  Don't ever let anyone step all over you." 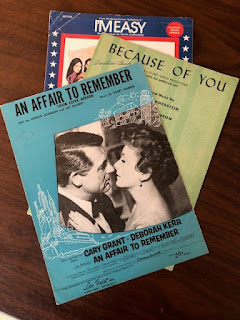 Women were speaking up by 2000, but as Destiny's Child reveals in "Say My Name," they are still putting up with bad behavior from their man, declaring, "I am dying to believe you," but admitting "Don't believe a word you said," instead recognizing their man had "Got dishonor in your eyes."

When Kesha sings "TiK ToK" in 2010, she's got more spunk but not much romance.  "Ain't got a care in the world, but got plenty of beer, Ain't got no money in my pocket, but I'm already here, and now the dudes are linin' up 'cause they hear we got swagger, But we kick 'em to the curb unless they look like Mick Jagger."

The song topping the charts in 2020 has more romance but reflects the social difficulties of the time in "Blinding Lights."  "I look around and Sin City's cold and empty.  No one's around to judge me.  I can't see clearly when you're gone.  ...I'm drowning in the night, Oh, when I'm like this, you're the one I trust."

When I began the research for this blog, I didn't expect what I might find after the turn of the century when I started listening more to the classical stations and didn't keep up with popular music.  Of course, this survey does not include country-western, and talk radio has increased in popularity,  displacing music stations.  What I discovered in my research is a reflection of change from decade to decade and from generation to generation.

I will close with the lyrics from one of my favorite songs from the 1975 movie, "The Way We Were."  It is a love story with a tender but sad ending.  I have always liked the way that the song and the movie describe that life doesn't always give us everything we once thought we wanted, but it does give us beautiful memories.  Sometimes, it gives us even more than we could have dreamed.  So, to those who may never have heard these lyrics from 1973 movie with Barbra Streisand and Robert Redford, here is "The Way We Were."

Light the corners of my mind.

Of the way we were.

Of the smiles we left behind

Smiles we gave to one another

For the way we were.

Can it be that life was all so simple then?

Or has time re-written every line?

If we had the chance to do it all again

Me'ries, may be beautiful and yet

What's too painful to remember

We simply choose to forget.

So it's the laughter

It is 4:00 am. I just took the dog out and instead of going back to bed, I am sitting at the computer eating ice cream and reading your blog. Yes, Memories. I can tell when I quit listening to the radio. In the 70s. Now I'll go back to bed with these songs running through my mind. Especially Simon and Garfunkel.
The Way We Were was actually released in 1973. Ella and I went to see it on our honeymoon. Ashamed to admit it but I fell asleep through most of it. I love Streisand as singer and actress and really must watch that particular movie as I have seen most of her others.