Memories That Should Not Fade 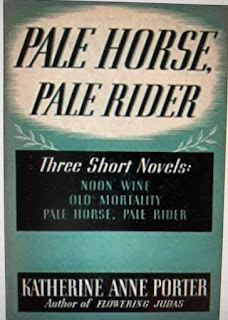 I have a clear recollection of first reading "Pale Horse, Pale Rider" by Katherine Anne Porter.  My husband had retired and we were enjoying traveling.  As he drove, I often read, and I happened to be reading that short novel by Porter.  It is a tragic story, and although it is fiction, it is based on the flu epidemic of 1918.

That was the first time I had heard of that epidemic that killed so many people.  It struck during W.W. I and impacted soldiers in particular, as well as civilians.

Until the international tragedy of Covid in 2020, the so-called Spanish Flu was the severest epidemic of the modern era, although in earlier history there had been other devastating epidemics.  I was shocked that I had never registered the 1918 flu epidemic prior to reading the novel, and I wondered whether I had heard of it and paid too little attention.  Is it possible that a novel  caught my attention more strongly that an earlier historic account had?  I hope not, but sometimes reading history seems less personal than it should, and a story touches us more strongly.

The second example of my learning of a dreadful historic event was when I was a young lawyer in my thirties.  A fellow attorney in my office was from Tulsa, Oklahoma.  I cannot recall the context of his remarks, but he referenced the burning of homes of Black residents by White members of the community.  Perhaps other lawyers were present who seemed to be familiar with the brutal history of the event, and they did not choose to continue the conversation.  For whatever reason, the conversation changed course and I did not learn at that time just how horrible it was.
I had not realized the extent of the crimes, nor that lives were lost in the burning of the Black Community.  It was quite some time before I learned the full context of the violence.  Today I am aware that both Black and White citizens of Tulsa died, but it was the Black community that was destroyed, both businesses and homes, from fires intentionally started.
There are many other examples of events that have happened that should not be allowed to fade.  We must not turn aside when we hear of such events nor dismiss what happened in the past as insignificant to the present.  Unless we learn from the past, we may fail to avoid the mistakes, cruelties, and wrongs in the future.  History can be our guide, both to avoid the mistakes of the past and to be reminded of the successes.  When we begin to forget that such things have happened, we will forget that they matter.
Americans can be kind and generous, but we must not become blind.