Isaac Would have Cheered

One of my favorite entries from Isaac Werner's journal is his explanation for ordering a book on public speaking.  It was his opinion that Women's issues would be important for quite some time, and he was considering becoming a public speaker in support of women getting the vote, as well as other rights, so he ordered the book to polish his skill.

He was supportive of women active in the populist movement during the 1880s, corresponding with Mary Elizabeth Lease and attending a rally in Pratt, Kansas with Mrs. Van de Vort as the main speaker. In the early 1870s, he wrote in his journal about the unfairness of men's treatment of women, specifically disapproving of his landlord's disrespectful comments about his wife, and also disagreeing with a fellow merchant's interference in the store's female bookkeeper's personal life.

When I saw Wally Funk burst out of Jeff Bezos' Blue Origin, I imagined how excited Isaac Werner would have been had he witnessed her achievement.  He encouraged women's participation in the populist movement, participation that included women lecturers, and he supported women getting the vote.  I do not doubt that he would have been cheering Wally that day.

Like women generations before her who had to wait for the vote, Wally Funk had to wait much too long for her chance to go into space.  The headline in the San Diego Union-Tribune reads:  "'Wally' Funk Likes Her Chances To Be 1st U.S. Woman In Space."  She had no idea that she would be 82 years old when she finally got her chance!

It wasn't as if Wally had started late.  On the contrary, she got her pilot's license at the age of 17.  Born February 1, 1939, the myth-making about her future in flying goes back to the age of 1, when it is said that when her parents took her to an airport, she walked right up to a Douglas DC-3 and reach out to touch it.  At 20 years old she was a professional aviator.  Reading her list of "firsts" is remarkable!  Skipping past all of those piloting achievements, her preparation for flying in space continued. 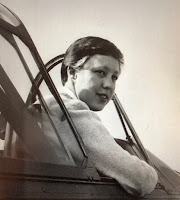 In 1961 she learned about the "Women in Space" Program, and although it was not an official government program, she applied, along with 18 other women.  The physical and mental testing they endured was rigorous, but she passed the tests, finishing third best, although she was only 21.  The program was canceled before the women underwent their last test.
When NASA finally opened the program to women in the late 1970s, she applied--3 times, She was turned down for not having an engineering degree or background as a test pilot, despite her other impressive credentials.  It was Lt. Col. Eileen Collins who became the first female to pilot a Space Shuttle, and although Wally was one of the seven women from that original "Women in Space" group from 1961 invited as guests of Collins to watch the launch and receive a behind the scenes VIP tour of the Kennedy Space Center complex, Wally's age meant her own dream of piloting a NASA shuttle was never going to happen. 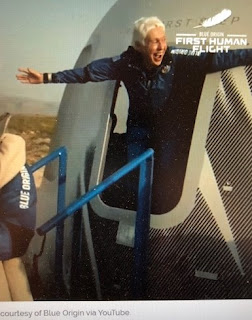 Yet, when Wally exited Blue Origin, the joy she expressed looked like someone fulfilling a dream.  That is not to say that Wally doesn't want more, even after becoming the oldest person to go to space, passing John Glenn's 23-year record.  She already holds many records--the first female air safety investigator for the National Transportation Safety Board, the first female civilian flight instructor of Army pilots, and the first female Federal Aviation Agency inspector. as well as so many other achievements.
Isaac Werner was correct.  Women's issues did remain important for the rest of his life and continue to this day.  The essay that appeared in the New York Times after the flight quoted Cady Coleman, a NASA astronaut who served aboard the space shuttle and the space station, saying "When Wally flies, we all fly with her."  However, Katie Mack, an astrophysicist shared the thrill of Wally's flight, but she pointed out that while she wholeheartedly supported Bezos's decision to include Wally on the flight, she is concerned that the exclusion of women by NASA for so long may now become "Selection of space crew on whim and money rather than based on selections by governmental agencies," a shift that may  continue to exclude qualified women.

A very determined woman. As Charlotte Whitten (my childhood hero) said, "In order to be thought equal to a man, a woman must be twice as good. fortunately this is not difficult."