Sights to See Nearby

In 1991 the Architectural Record published a list of the one hundred most important buildings of the twentieth century.  Twelve of those buildings were designed by Frank Lloyd Wright.  There is little dispute about the exceptional quality of Wright's work.  Feelings about his character vary.

This past weekend we spent an afternoon at the Allen House, a Frank Lloyd Wright house in Wichita built for newspaper publisher Henry Allen and his wife Elsie. Wright was commissioned by the Allens to construct their home in 1916, but it was not completed until 1918.
We are extremely fortunate to have this house in Wichita, refurbished to look much as it would have when the Allens lived there, with furniture also designed by Wright that has been acquired to provide the appearance of how the home would have been decorated originally.
We happened to be there on a beautiful autumn afternoon, and the leaves made a perfect background for the house and the grounds.  The picture taken of me, with my reflection in the Wright designed pond, offers a glimpse of the property.
According to literature provided on the website, "Architectural writers who have visited the house believe its living room is one of the great rooms of the 20th century."  The house contains more that 30 pieces of Wright-designed furniture, all of its original art glass, and several examples of innovations made by Wright. 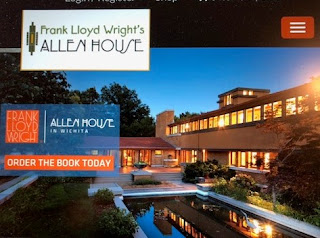 This image from their brochure shows the exterior of the house from a different angle, and the abundance of windows.  Wright placed great significance in the harmony between the house and its surroundings, as the garden in this picture illustrates.  Wright utilizes nature in his designs.
I became interested in Wright because of a book titled "Loving Frank."  It is a novel based on a love affair Wright had.  I'm not sure how I heard about the book, but I bought it and promptly packed it in a box during a move.  Only a few weeks ago did I finally open the right box from that move to at last be able to read the book I had started long ago.  I was so intrigued that I immediately ordered another book titled "Plagued By Fire," which is more authentic.  Even that author, however, admits that getting the story of Wright's life entirely accurate is nearly impossible.  The imagination that made him a famous and respected architect was frequently put to work by Wright to elaborate reality.
The author of "Plagued By Fire," Paul Hendrickson, introduces Wright in the first chapter with these words:  "Mother-fueled, father-ghosted, here he comes now, nineteen years old, almost twenty, out of the long grasses of the Wisconsin prairie, a kid, a rube, a bumpkin by every estimation except his own..."  That tease by the author offers some clues to the charm, the brilliance, the selfishness, the neglectfulness, the generosity, the story spinning...the mythology and gifts of this man.  But what is certain is that he influenced and changed American Architecture.
What is particularly wonderful for us is that many of his homes have survived, and in our area we are fortunate to have one of his best examples.  USA Today has called the Allen House one f the "10 great Frank Lloyd Wright home tours" in the nation, and many of those who read my blog can travel to tour the house within an easy drive.  The guides are knowledgeable and friendly, and you cannot help but enjoy the tours, whether or not you are a fan of architecture.
If you go to their website at https://flwrighwichita.org you can find the schedule of tours planned for the Holidays.

I guess I am a Philistine.