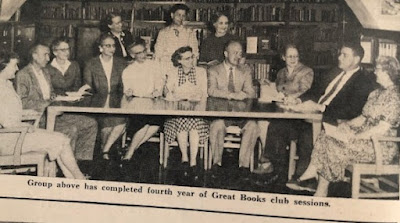 My encouragement to set a reading goal for yourself for 2022 was pretty simple compared to this serious Pratt group from 1962!  The group began four years earlier, yet as they gathered in the Pratt Library in the Fall of 1962 they were still enthusiastic about their self-education course sponsored by the Great Books Foundation.  The course was free, and the approach was not to discuss the books themselves at their meetings but rather to let a different reader lead the discussions focused on problems raised by the participating members.

The group met twice a month, pursuing a program intended to last 10 years.  Although the Great Books Foundation did train leaders and would supply informational materials, the group itself selected the books they wanted to read.

Their 10-Year Study of Great Books was obviously serious business!  Interestingly, Isaac Werner, my Prairie Bachelor, had some of those books in his library.

The newspaper article closes with the explanation that the fifth year class had already completed the above listed books and would be reading their own selections, with the following authors:  Plato; Aristotle; St. Francis; Dante; Tocqueville; and Melville.

Perhaps some of the people in the photograph can be identified, but I am certainly impressed by the aspirations of those Pratt readers of 1962!