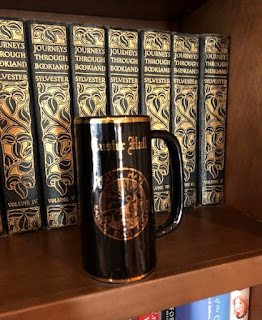 I have reached the age of accumulated things.  My husband and I are both collectors, but we were never ones to buy things just because they were currently popular.  We bought things we wanted to live with for a long time.  However, if you live long enough, it is inevitable that you will collect much more than you need.  We have reached that age and need to decide what should be gifted or discarded.  Like many of our friends, we are finding that difficult, because the value of so many of our things is a matter of memories.

One of those things is the decorative Custer Hall mug that belonged to my mother-in-law.  She had already been widowed twice when my husband and I married, the first time having been left to raise two little boys alone, and the second time having thought she had found a husband to enjoy the rest of a long life together, only to be widowed again after a few happy months.

Of course, we realized her sadness, but perhaps we were too young to fully understand her courage.  At the time of her second marriage, she had given up her job to move to a new town.  With the sudden death of her husband, she had to turn away from the plans they had made together to make new plans for herself.  That decorative Custer Hall mug is a symbol of her courage.  She decided to go to college.

To be honest, today I see it as courageous, but as a young bride having my mother-in-law join us at college wasn't quite what I had in mind.  Today, I see it differently, and that is why I struggle to know what to do with her mug.

It had been a long time since high school for her, and stepping back into a classroom was challenging.  Her grades weren't great, but she persevered.  Then, she discovered a way to make it all work.  She continued to take a few hours, but she became a dorm mother at Custer Hall.  The transition from a coed with gray in her hair to a dorm mother was a better fit.

Today, each year hundreds of people over the age of 50 go back to school.  Some get degrees to change careers and others choose to explore long-held passions that had to be deferred until retirement.  That was not common when my mother-in-law began her college career.  She had been a working mother when that was less common--although mothers at that time certainly had important responsibilities that did not include a pay check.  My mother-in-law had the responsibility of parenting alone and being the sole bread winner.

The idea of senior citizens continuing their studies is fairly common today, and if not directed toward a degree then for other reasons.  Some places offer senior citizen tuition waivers.  Other seniors return primarily to enjoy campus amenities.  In fact, in some places, retirement communities are planned nearby the university.  Some schools offer classes just for seniors, and there are also opportunities for online courses.  I have now taught two virtual Osher classes, a program designed for continued learning for people 50 and older.

But in my mother-in-law's era, what she did was unusual and brave.  For me, her Custer Hall mug is like a trophy, awarded for her courage and determination to push sadness and disappointment out of her way and get on with life.

With Mothers' Day not far away, being on May 8th, this seemed like a good time to share my mother-in-law's story and the symbol of her courage that I see when I look at the Custer Hall Mug.

What a wonderful story about a strong woman and mother! Her life and her mug is a treasure! ~Deb L.

Oh this is really sweet. Yes she was brave to make such bad big change and to start again!
It's wonderful that you honor her by telling her story!

What a beautiful tribute to your mother in law. No matter what you do with the mug, the story you have shared here with others trumps any “thing”.

What a beautiful tribute to your mother in law. No matter what you do with the mug, the story you have shared here trumps any “thing”.

Beautiful memory dear friend - after our long friendship, I can see how “Pinky” was shaped by her courage 🌷😇😇🎩

That is a wonderful story about a very special person in your life. Thanks for sharing it. We have many such items that mean so much to us but little if anything to anyone else. Certainly they would not be shown on "Antiques Roadshow" since they have no monetary value and bring nothing at garage sales or estate sales. BUT they mean so much to us. That's why we have refused to let interior decorators pick items for display in our houses. Instead we use items of significance to us whether or not they have any monetary value. For someone who writes as well as you do Lyn, these items could form the basis of incredible stories that would live on well after we are all gone, just as you have done with Isaac. Something at least to think about.