The Oldest Boot Hill West of the Mississippi

So, you think you know the location of the Oldest Boot Hill West of the Mississippi...but you may be in for a surprise!  Did you think it was Dodge City?  No, that came 5 years later.  Maybe you thought it was Tombstone, Arizona, or Dead Wood, South Dakota, but neither of them is older than the Boot Hill pictured above.  The oldest Boot Hill west of the Mississippi is in Hays, Kansas, located on the northeast corner of  Fort and 18th Streets.  When that location was chosen in 1867, it was about half a mile north of town, but by 1874, when the last recorded burial took place, the town had expanded to reach the burial grounds.  Some of the graves were relocated to the new Mount Allen Cemetery, but others remained.
The statue, called "The Homesteader" was created by Pete Felten, but despite the name, many of the men buried there were not exactly our idea of a homesteader.  The name of these early cemeteries--Boot Hill--was derived from the fact that many buried there died with their boots on in shootouts, from suicides and racial disputes, and from alcoholism.  However, that was not always the case, and the  first man buried in the Hays Boot Hill was a teamster, kicked in the head by a mule.
The last known burial was in 1874.  Many, if not most, of the burials were done without ceremony, and records of the men buried there are incomplete.  The number is believed to be between 37 to 100, and most likely to be 79.  There are no grave markers, but it is a peaceful spot for those who are buried there. 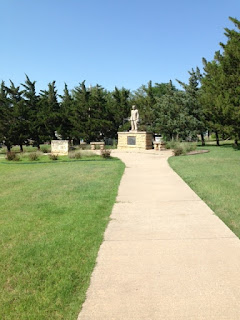 This post is unlike my usual Memorial Day posts, yet the men and women who expanded settlement across the nation in its early years are worth remembering.  Today we are also becoming more aware of those we displaced in settling America, the Native Americans who lived on this continent before most of our ancestors arrived.  We are also becoming more respectful of those who arrived unwillingly but who also deserve our respect for settling this nation.  Certainly,  Memorial Day is intended to honor those who fought and those who died for this Nation.  However, perhaps we might also pause to  reflect beyond those who served our nation, and our own families.  Perhaps we could also take the time to reflect on some of those men and women we too often forget when we honor the dead who came before us.
Posted by Lynda Beck Fenwick at 8:36 PM

Email ThisBlogThis!Share to TwitterShare to FacebookShare to Pinterest
Labels: Boot Hill Cemeteries, Hays (KS) Boot Hill Cemetery, Oldest Boot Hill West of the Mississippi, Remembering those who came before us

A nice post remembering that others died for your country as well. A peaceful place to rest is what many prairie cemeteries are. Not many trees and open to the wind and rain. In spite of the cowboy's lament, I think it is a great place to spend eternity.