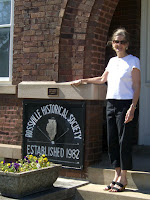 On the spur of the moment, my husband and I decided to drive to Northampton, Massachusetts, for a Willa Cather Seminar at Smith College. With no idea what a great adventure we would make of our impromptu road trip, I left all of my research about Isaac behind, except for what was on my laptop. Only when we stopped for the first night did we look at the atlas and realize how close to Rossville, Illinois, we would travel. Of course, we had to make the detour to see the town where Isaac had lived in the 1870s.

During 1870 & 1871, Isaac had been the proprietor of a drug store, but he had chosen to sell that business when the railroad came to Rossville. Druggists in those days sold liquor "for medicinal purposes," and Isaac was concerned that an unsavory crowd would arrive in town along with the railroad and cause trouble for him as a respectable businessman, demanding liquor for reasons other than their health. 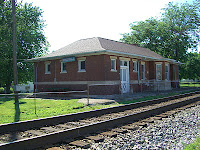 Deciding whether to bring the railroad to Rossville was a tumultuous time for the community. Isaac sided with those who opposed it, and for a time he was among the majority. Isaac wrote: "Voted about 5 to 1 against issuing Bonds and about same ratio repealing former obligations. It was rather interesting and ridiculous during all day, to notice all round humanity how much Rail Roads on their brains, Bulls and Bears out in Rossville Wall Street crowds on store porches, freely and liberally discussing...and cussing."

Eventually the idea of a railroad began to gain favor, and the Bonds passed. The dispute shifted to where the depot should be built. Isaac described the conflict: "Somehow no public certainty yet where Rossville is to have its Depot for R.R., on Gilbert's, Livingyard's or Henderson's. Some tugging by each, but I guess old Gilbert will about win the stakes...Seem being conducted rather quiet & reserved." Isaac sided with Henderson, but Gilbert had been an early supporter of bringing the railroad to town, and Isaac suspected that the railroad would reward him by giving him the site. 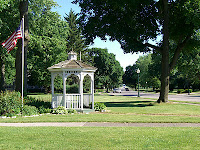 After Isaac had left Rossville, a friend had written him a long letter, describing how the village had changed, specifically because of two events in the 1880s--a tornado that had destroyed many buildings and a fire that had burned the wooden businesses. From my research I had learned that Rossville had become known as a charming tourist destination, with many antique shops, some of which had been destroyed by a fire in 2004 which burned the west side of Main Street. Therefore, I knew that the town Isaac had known was essentially gone.

We arrived in Rossville a few minutes after four o'clock, and because we had a schedule to keep in order to reach our destination in time for the seminar, we could not linger. Consequently, we only peeked through the windows of the closed Historical Society Museum and Railroad Station Museum, both of which looked very interesting. We also enjoyed driving some of the streets, although we found nothing that appeared to date back as far as Isaac's time. 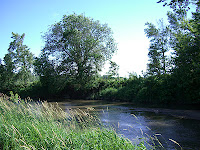 What we were able to see, however, was the river at the edge of town. Isaac worked in his drug store six days a week. Naturally, he looked forward to the one day a week when the store was closed and he could be out of doors, often joined by a dog named Coally. "...took exercise stroll down the woods...[with] Coally to chase rabbits--started few out but Coally too fat to run, lost distance all time till rabbit out of his sight, but he yelped after them." Even during the cold winter months the river was a gathering spot: "Fine calm clear moonlight eve, boys again down on the creek ice skating and hollering about, enjoying themselves." Isaac's cousin Ezra played the accordion and Isaac described one late afternoon stroll: "...down the lovely woody acres to West bluff, there perched on an old stout log, struck up the music...never before heard in the woods--the eve with west landscape and water scape over the bottoms right before us, such lovely sunshine of declining Sol... lightly roaring on rushing stream, and few little snow birds, chirping lively about the brush. Who could avoid imagining more or less Venice and Italy surrounding us?" 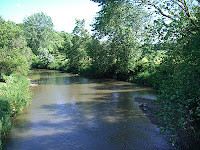 The opportunity to lock his shop and relax with friends in the countryside was something to look forward to, but most of his time Isaac was a businessman, at work from early morning into the evening. He was in his mid-twenties and was proud of his friendships with older, experienced businessmen in town. He wrote of one of the early Rossville businessmen: "[You] do not find every day such enterprising men as W.J. Henderson, with corresponding capital in an inland town like Rossville. ...Others, of course, since his adventuring tried to follow him, but if he had not been here as a leader, who else would have dared to lead? And what would they have accomplished. No Sir, J.W.[sic] Henderson was so far the business pillar of the community."

Isaac's years in Rossville were good ones for him. After selling his drug store business, he was tempted by the possibilities of participating in the town being built near Hoopes Farm, prospering as the town grew. Instead, he stayed in Rossville to form a milling business with his cousin Henry and a man named Mr. Ross. He also bought two lots in the "New Town" development of Rossville, planning to build a home with a separate library for all of his books. Although like many others he was eventually drawn further West where he claimed a homestead on the Kansas prairie, for more than a decade and even during hard financial times when his need for money was desperate, he kept the lots he owned in Rossville, perhaps imagining he might someday return, or perhaps only unwilling to sell because of the memories of old friends and good times there.

Rossville is still a charming town, and the arrival of the railroad did not ruin it after all, despite the concerns shared by Isaac and many of the established merchants. Next week I will share our journey as we replicated Isaac's trip with friends in a borrowed buggy to see the location of the proposed intersection of two rail lines where "Hoopestown" was supposed to be built.
Posted by Lynda Beck Fenwick at 5:24 AM

Will you go back again or did you have enough time to do all you needed while in Rossville? This research is a great adventure for you and for those of us living vicariously through your blog posts

The more things change, the more they stay the same. That's what I thought as I read about the differences of opinion among the townspeople about the bonds and the railroad location. What an interesting journey Isaac has led you on!

Posting this blog about Rossville led to my learning that a member of the Rossville Historical Society has a photo post card from 1874 of "down town" Rossville with the drug store in the foreground. Isaac sold his business in 1871, but with the few wooden businesses in the picture, it seems likely that the drug store in the photograph was where his business had been. To answer the question whether I would go back again...I would certainly like to see that post card and meet the man who collected it!

Please visit Rossville again and spend some time in the historical society. You will be amazed by the wealth of information that you find there and the knowledge of the volunteers who man it. Also, visit Mann's Chapel south of Rossville. It was built in 1857 and is in beautiful condition to this day. It was certainly there when Isaac lived in Rossville.