The Stafford County Historical & Genealogical Society is building poor. So many landmark buildings along the Main Street of Stafford have been gifted to the Society, that much of their budget is spent maintaining what they have received. It is another case of generous donors, unpaid volunteers, and a hard working Executive Secretary rescuing and preserving the history of the community for future generations. During the past two years, I have spent many days doing research at this museum. 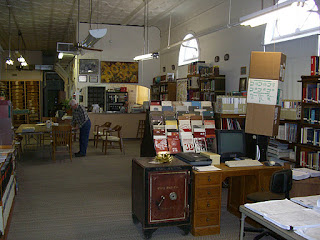 The Stafford County Historical Society acquired a real treasure several years ago. For two generations, the Gray family operated a photography studio at 116 N. Main in St. John. Begun by W.R. Gray in 1905, the studio building also contained the family home. A son, Royal, followed his father's profession, operating a studio in Ulysses, Kansas, and another son, Dr. Arzy Gray, worked as a chemist for Eastman Kodak. After attending what is now UCLA, daughter Jessie became her father's business partner in 1940, assuming the business seven years later when her father died. When Jessie retired in 1981 she donated an estimated 29,000 glass plate negatives to the Stafford County Museum. The museum curator believes it is the largest glass negative collection in the country specific to one location. Imagine standing at a window and watching a parade of people representing nearly eight decades of one community's citizens, together with a backdrop of businesses, farms, sporting events, festivals, and other moments captured by the photographers. The people you observe are mute, frozen in their own times, and you cannot call out to them the questions you would like to ask, but they tell a story of their particular period in their clothing, hairstyles, and poses. Volunteers continue to labor cleaning the negatives and documenting the subjects portrayed, a time-consuming task. 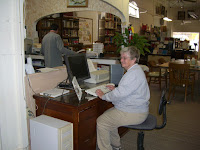 In an arrangement with Fort Hays Kansas State University, the photographs are available for viewing online at http://contentcat.fhsu.edu/cdm/landingpage/collection/stafford where you can see hundreds of turn-of-the-century images, with more appearing periodically as the glass plates are cleaned. Unfortunately for me, Gray's Studio did not exist until after Isaac's death, and although I know he sat for studio portraits in both St. John and Pratt, I have not been able to locate those pictures. 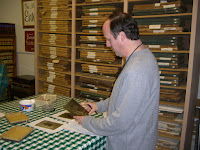 Most of my time at the museum has been spent looking at old newspapers, so much better than doing that research with microfilm. It is quite incredible to handle the actual old newspapers, yellowed and brittle with age, but filled with news of the times--local, national and international, as well as gossipy community reports about new babies, neighborhood illnesses, crops, community feuds, and all sorts of things. After many days of standing at a raised table, carefully turning the fragile pages, and reading about what was happening in the world in which Isaac lived, I sometimes felt I had been there. 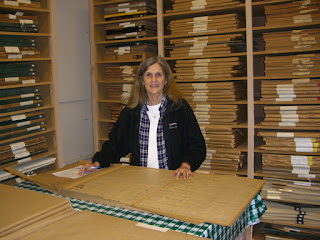 An amazing discovery for me was finding how often Isaac's own writing was published in the County Capital. He authored articles about his experiments with different varieties of potatoes, as well as his carefully documented experiments with corn, planting different varieties and recording dates of planting, as well as depths of sowing the seeds and distances for spacing the rows. I also found Isaac's name listed as an officer of several farmers' organizations, and articles authored by him related to his participation in those groups.

Michael Hathaway, the Stafford Historical Society's Curator and Executive Secretary, was a great help to me as I spent many days of research at the museum. Returning to read newspapers over a century old, I became a sporadic "regular" at the morning coffee sessions, joining a dependable crew of volunteers who donate their time to keep the museum going for little compensation other than a few cups of coffee.

(For some reason the link to the Gray Studio site is not working, but the address is correct, if you will enter it yourself. It is worth the visit!)
Posted by Lynda Beck Fenwick at 8:35 AM