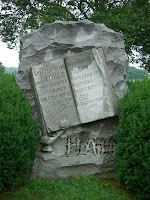 Isaac's childhood church is older than this nation. The first steps taken toward the erection of a church were in 1730 on land donated by George Hain. It was customary in those times to call the church by the name of the man donating the land, so Hain's Church it became, although the proper name was St. John's Reformed Church. The site of Hain's Church was a high hill, said to be the highest point in Lebanon Valley. 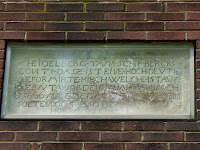 About thirty years after the first church was erected, a second church built of stone was erected in 1766. The American colonies were still ruled by Great Britain, and a stone plaque over the doorway read (translated from the German to English): "All who here go out and in / Should obey God and the King." The patriotic members of the church obliterated the word "King" when America fought to gain its independence. 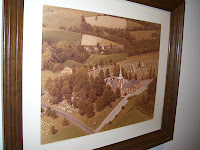 In 1844, the year of Isaac and his twin brother Henry's births, the church was remodeled and the stone was plastered, the exterior painted to resemble brick, and in 1851 a belfry was added. In 1878, the year Isaac homesteaded in Kansas, the third church building was erected as a southern extension to the 1766 building. Today's beautiful red brick church with its towering steeple and its history told on the weathered gravestones of the surrounding cemetery still sits proudly on the hill donated by George Hain.

When we timidly entered the church we were welcomed by the staff, willing to help me with my research despite my interrupting their work and my failure to arrange our visit in advance. The 1816 History of St. John's (Hain's) Church they shared with me was a researcher's dream, with an entire chapter on the Werner Family. It also contained the baptismal records of Isaac and his siblings, records of Revolutionary War & Civil War Soldiers Buried at Hain's Church, the death record of Isaac's father William, and many other valuable chapters. As I continued my research, I found something even more amazing. I asked if there were any Werner members of the present church, and they introduced me to James Werner, Isaac's first cousin four times removed. 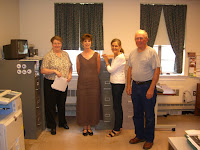 James came to the church and shared with me family pictures and letters, including several from Isaac's nephew Charles sent to his father Henry B. Werner, Isaac's twin brother. Included among these family treasures was the drawing of William & Rebecca's stone house, which I previously posted on November 4, 2011 in the post "Isaac's Birth & Childhood." Unbelievably, James even had a picture of Isaac's twin brother, Henry. I do not know if they were identical or fraternal twins, but that picture may be as close as I can come to knowing what Isaac looked like! James' generosity in sharing family documents was incredible, as was the kindness of the Hain's Church staff.
Posted by Lynda Beck Fenwick at 9:30 PM

It sounds as though you found a little bit of research "heaven" through the doors of this church and those associated with it!

That is so awesome to find his fourth cousin with information AND pictures. A treasure trove.