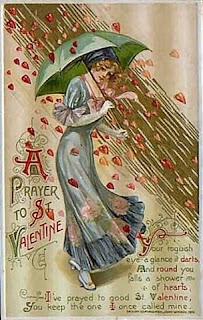 Ferreting out something about Isaac B. Werner's private thoughts on love & romance isn't easy. There are, however, clues to his feelings, and with the approach of Valentine's Day it seems like the right time to peek into Isaac's heart.

Isaac's father William did not marry until he was forty years old, and that may have influenced Isaac's view that marriage should not be rushed. As a young druggist in Rossville, he was very ambitious. He wrote: "As each man is the architect of his own fortune, there is a great deal also in what materials we make use of, and what plans we follow out." When his twin brother Henry sent a letter sharing news that several of Isaac's mischief-maker friends had married, Isaac wrote in his Journal: "...the Home boys still continue pretty fast tampering with the cup of Sorrow--till ending in wedlock. Then simmer down--like a final anchor and enjoy the ups and downs of married life and the animated fruits of their toiling; while I a thousand miles away, like a Hermit delighting mostly in my ever so dear and trustful best companions, Books, and intend continuing so at least for coming 5 or 10 years--no telling though how circumstances unexpected might interfere..."

The young ladies of Rossville certainly were among the distracting circumstances that threatened Isaac's literary plans, particularly when fellow merchants hired a new employee. "To-day Miss Wilky commencing as Book-Keeper for Henderson Lee & Co., a little novelty for Rossvillions--Female clerks--not agreeing very best with some of those vulgar minds, resorting to such places to give vent to their vulgar thoughts and general conversations..." Despite Isaac's prediction that customers who gathered to cuss and discuss in that store might resent the presence of a young lady, forcing some moderation in their language, there were at least some customers who found Miss Wilky a new reason to frequent the store. He wrote: "...J.R. Lee called in and we indulged in a leisure conversation concerning their late feminine clerk, he telling me how of late some of the young country Romeos tried to coax his Bookkeeper into their society attending country dances, but he kindly advising the said clerk concerning her best course of associating to retain creditably said clerkship, which she is filling at present." Isaac was not among those young Romeos inviting her to country dances, but he was one of her admirers, writing: "For first time fairly seen--as she called in for trifle--the late arrived feminine Book-keeper of Henderson Lee, appearing in quite fashionable 'Harness' partly approaching the Grecian Trend, eyes pure and bright as crystals, not quite so bad."

Isaac was not one to indulge in insincere flirtations. "Valentine's Day, Birds pairing out. Few calls for Valentine's by city youths but city merchants neglected to supply themselves, consequently not much libeling." Isaac might have been awkward at expressing his feelings, but if he sent a message of love, he believed it should speak the truth.

The young lady who could win Isaac's heart needed to appreciate books, although he was willing to lead her in that direction if she had not acquired the habit of reading by herself. Proof of this is found in a conversation he recorded in his Journal: "In morning dark-eyed 'Belle A' called in and returned loaned book 'Cave on Coloring.' I inquired, 'Why, have you read it through already?'" "Yes." "Well, could you understand it?" "No, not at all." "How do you like it?" "Oh, I don't like such reading." At this point, unwilling to give up on the young lady, Isaac said, "Ah, you must not expect to learn all at once. Here, I have another small book..." The young lady took the book, but that was the last mention of her in the Journal--probably a romance it was better for both of them to have avoided.

No one could assume that Isaac was immune to the charms of a pretty young woman after reading this passage in his Journal: "The figure of a tall woman, black furs and veiled Highness...I glancing and thinking to myself, 'What looking incarnation of the East may you be?' She halted before showcase, throwed back her veil, behold! If it wasn't 'Juliet' in all her beauty and plumpness. She bought her wanted goods, and soon exit[ed] again, the first time she been in store for couple of months, she looking fair and bright enough to tempt one to lean over counter [and] osculate those pretty pouting scarlet lips, and fresh cheeks." Whoever the young lady was to inspire this uncharacteristically flowery passage must have been exactly the sort of "circumstances unexpected" Isaac was thinking of when he confessed that his plan to defer marriage for 5 or 10 years might meet with interference! 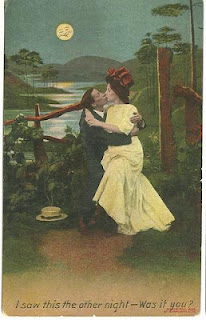 So, scattered among the serious passages about his determination to acquire a fine library and study the wisdom of learned men of past and present generations and the responsible descriptions of his commitment to maintaining a reputable business is the voice of a man in his mid-twenties, charmed by pretty women and occasionally making a fool of himself as a result. As Jules Renard, a Frenchman born only a few years after Isaac, wrote, "Love is like an hourglass, with the heart filling up as the brain empties."

By the time Isaac left Rossville to homestead in Kansas he was thirty-three, and still a bachelor. In a later post I will share some more clues about Isaac's encounters with cupid on the plains of Kansas. I hope Valentine's Day is happy for everyone, and I'll add this quote by Scottish Evangelist, Henry Drummond (1851-1897): "You will find when you look back upon your life that the moments when you have truly lived are the moments when you have done things in the spirit of love."

Love the prayer to St Valentine and the quotes at the bottom of the page. Glad to learn Isaac was not all work and books.

From you biggest fan, XOXOXOXOXO