How Far is Gettysburg?

Gettysburg, Pennsylvania, is less than one hundred miles from Isaac's hometown of Wernersville, Pennsylvania, the village founded by William Werner, Isaac's father.  (To read more about Isaac's hometown and childhood, go to the blog archives to read "Visit to Wernersville, Feb. 16, 2012; Isaac's Birth & Childhood, Nov. 4, 2011; Isaac's Childhood Church, Feb. 23, 2012.)  Today the distance can be driven in well under two hours, but at the time of the American Civil War, when Isaac and his twin brother Henry were still in their teens, the trip through rugged country would have taken much longer.
Pennsylvania was a Union state, and during the Civil War the commonwealth raised over 360,000 soldiers for the Federal armies, more than any other state except New York, although other states sent a larger proportion of their populations.  Thaddeus Stevens, the senator who played such a pivotal role in the recent movie, "Lincoln," was from Pennsylvania, as were several well-known generals. 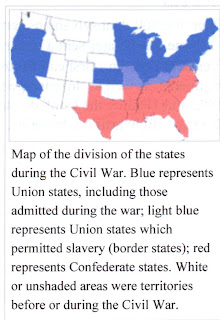 The map shows the division of states during the Civil War, the Union states indicated in dark blue, the Union states that permitted slavery (so-called 'Border States') in light blue, and the Confederate states in red.  Territories at the time of the War are shown in white.  Yet, lines drawn on a map do not always tell the entire story.  Sympathies of individuals did not always align with those of the states in which they lived, and Pennsylvania was no different from other states in that regard.  In addition, there were many who preferred to avoid military service entirely, if that could be managed.

The exhibit that greets visitors as they enter the Gettysburg Museum lists all the states and the numbers of soldiers that fought from each state.  Each state lists both Union and Confederate soldiers, and it surprises most visitors that large numbers of men and boys chose to disregard the state alignments to serve, instead, the side with whom they agreed.
In 1861, when Isaac and his brother Henry were 17-year-old school boys in Wernersville, PA, their teacher was a man named Francis Trout Hoover.  Almost three and a half decades later, their old teacher published a book titled, Enemies in the Rear:  Or, a Golden Circle Squared.  A Story of Southeastern Pennsylvania in the Time of Our Civil War.  This book is a fictionalized account of the division of loyalties among citizens in the fictional village of Haltfest, located in Berks County, PA; however, most believe that Haltfest is a pseudonym for Wernersville.  By the time the book was published, F. T. Hoover lived in Rushville, NY and Isaac was deceased and could not have read his former teacher's book.
In the Preface, F. T. Hoover began his story about draft dodgers and active Southern sympathizers with these words:  "To square the circle, that is, to determine its exact contents in square measure, has generally been held to be impossible; but, as herein appears, the national government solved the famous problem perfectly, at least so far as it related to the Golden Circle of Knights in southeastern Pennsylvania.  And the solution showed the exact contents of this particular Circle to be an admixture, in about equal parts, of ignorance, hypocrisy and treason."
As can be deduced from that beginning, F. T. Hoover did not treat his old village and its citizens in a complimentary way in his book.  People still living at the time of the book's publication, who were personally familiar with the events of their community during the Civil War, recognized specific characters, despite their fictitious names.  While they said that some of Hoover's story was pure fiction, they admitted that much of it was true.  So true, in fact, that someone wrote a book identifying the real people masked in the story by pseudonyms.  According to a local historian, copies of that book are rare, most having been destroyed by people who did not want their family names identified!
F.T. Hoover says in the Preface:  "...during the war the agitation and conflict were not all confined to the army and navy, the capital and the great cities.  Remote districts and obscure country places also felt the great movements and were stirred, though of course in a smaller degree.  And that in such localities many thrilling episodes occurred we can readily believe if we will but remember that in those days there were enrolling officers, drafts, and Knights of the Golden Circle."
We tend to look back at history and see things in precise terms--the Union and the Confederacy.  Yet, then as now things are rarely so sharply defined.  The opinions and actions of some people fit the extremes of inflexible black and white, but experience shows that the opinions and attitudes of most people fall in shades of gray rather than absolutes. 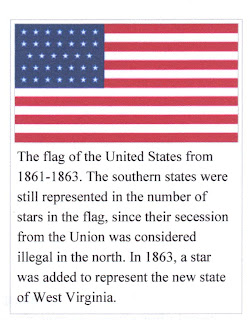 together to resolve disagreements.  Enough Americans believed the differences were so great that the nation should be divided, but President Lincoln never believed that the South had the legal right to secede.  The flag of the United States from 1861-1863 retained all its stars throughout the war, adding a new star for the state of West Virginia.  The Union was preserved.

Francis Trout Hoover wrote his book "to deepen the interest of the present generation in the history" so that we would never again fall into the trap of Ignorance, Hypocrisy, and Treason.  I would add a fourth danger, warning us never to succumb to the arrogance of believing our generation is smarter than the Founding Fathers and over 200 years of history.

(If you wish to read Francis Trout Hoover's book, Enemies in the Rear:  Or, a Golden Circle Squared," about this little known slice of history during the Civil War, you can find several publishers of F.T. Hoover's novel in the form of 'books on demand' at amazon.com.)
Posted by Lynda Beck Fenwick at 11:53 PM

I am surprised that Isaac didn't join up. He would have been borderline old enough.
Considering the current state of affairs, the union states today would have been far better off to have let them go. Most of the Know-nothing Far right religious Republicanism appears to be driven by bigoted racist white southerners who have never admitted defeat. Lincoln was able to win the war but was not there to win the peace.

Dear Blog Fodder, We visited the Presidential museum of Johnson, such a little known President. He was a Democrat that Lincoln selected as his running mate in hopes of bring some cooperation between parties, but the Republicans resented him and the Democrats saw him as a traitor to the party. Johnson had little support, but he did try to carry out Lincoln's goals after the War. Interesting history.

Dear Ms Fenwick, in doing some research on my family line through the bBerks History Center, I read "Enemies in the Rear" and found the romantic style of the book, along with the rich ethnology, very compelling. Hoover was no doubt progressive for his time. (However , the stock figures of Jewish peddler and docile, servile Black man were my lone objections to the book, which was otherwise very enjoyable to read)

Question: Can you give me the title of the book you reference that gives the real names and places behind Hoover's thinly veiled "fiction"? Thanks Steve Reedy stevereedy7@gmail.com