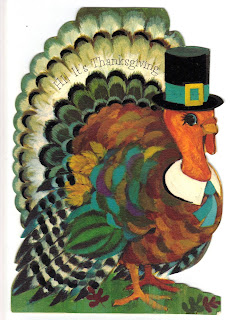 One Thanksgiving morning during the years of drought and low prices for crops, Isaac wrote in his journal that he didn't see many signs of celebration in his community, adding that 'people didn't have much to be thankful for' in those hard times.  As negative as that comment sounds, Isaac never lost his belief that conditions would improve, and he continued to work politically and agriculturally with his neighbors to make things better.  Despite his severe medical problems the last years of his life, by the time of his death he had managed to pay off his debts.  Things had improved for Isaac and his neighbors.
As I type this blog, I am sitting in a house built by one of the neighbors who went through those hard times with Isaac.  My great grandparents, Aaron and Susan Beck, raised their two children in this community.  Susan built this house with her son, Royal, who brought his bride, Lillian Hall, to this house when they married.  Six of their seven children were born in this house, including my father.  (Only their last child was born in a hospital.)  After my grandfather's stroke, my parents returned to spend the rest of their married life together in this house, where my brother and I were raised.
When I began transcribing Isaac Werner's journal, I had no idea that he had known three sets of my great grandparents.  Because of the renaming of this township, I had mistakenly thought Isaac's claims were located in the present Clear Creek Township to the west of my ancestral home.  My interest in Isaac was strictly historical.  Only later did I learn of the personal links I share with Isaac.  However, I am especially thankful that Isaac has led me to discover so much about the history of my community and the significant role Kansas played in American history during the late 1800s.
It must be obvious to those of you who have followed my blog that I am a great believer in the importance of history and traditions in our culture, teaching each new generation respect for those who came before them and sharing the wisdom gained from the past.  I believe when modern generations are unaware of history and traditions there is not only educational ignorance but also character deficiency.  James Fennimore Cooper said:  "The man who has no other existence than that which he partakes in common with all around him, will never have any other than an existence of mediocrity."  Likewise, I would say that a society that ignores its past history and traditions through neglect or arrogance cheats itself of the benefits of its rich heritage. 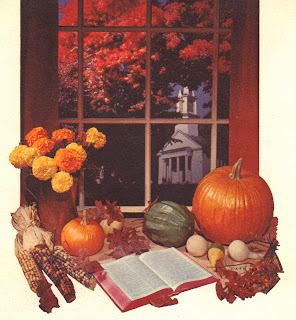 I am particularly thankful for my roots in this community and for my awareness of people who struggled to build the world into which I was born.  Living in this ancestral house has made me sentimental about not only its history but also the flotsam of everyday things left behind by former residents.  (See "Isaac's Efforts...", 11/14/13; "Susan's Album," 3/21/13; "Disappearing Traces of the Past," 12/23/11).  I must constantly work to clear away, bit-by-bit, some of that memorabilia they have left behind.  This week's images are from a card and program saved by my mother-in-law, Irene.  She would be surprised to know that these images are being passed along for others to enjoy so many years later!
I want to close by thanking those who have followed my blog and who have supported and encouraged me throughout the researching and writing of my manuscript.  I am grateful for your interest and enthusiasm.  May you have a Happy Thanksgiving and a joyous holiday season in the coming weeks!
Posted by Lynda Beck Fenwick at 10:18 PM

You have done such an amazing job researching and documenting Isaac's life. Love it!