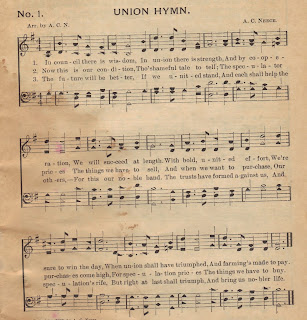 In an era lacking radio, television, CDs and internet, people still enjoyed music.  Many towns formed bands  (See "Music on the Prairie, 1/24/13), and apparently the St. John Town Band was regarded as one of the best in the area.  At least two of Isaac Werner's neighbors gave singing lessons during the winter when people were not busy in their fields.  Isaac described in his journal how much he enjoyed evenings spent with friends who played musical instruments or gatherings that included singing.
It was only natural that when farmers came together in organizations like the Farmers' Alliance, which Isaac joined as an active member, music was a part of their meetings.  Recently I discovered a song book from one of these organizations, specifically "The Farmers' Union Hymnal, A Collection of Songs for Farmers' Union Gatherings, Picnics, Social Entertainments, Etc., Etc." with songs written by a man from Sunset, Texas, with publishers in Dalton, Georgia and Dallas, Texas.  The "Union Hymn" opens the book, declaring "In council there is wisdom, In union there is strength..." and the second verse describes the conditions that have given rise to the need for farmers to unite.  "Now this is our condition, Tho' shameful tale to tell; The speculator prices the things we have to sell, And when we want to purchase, our purchases come high, For speculation prices the things we have to buy." 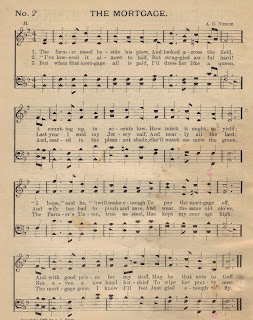 Many farmers, like Isaac Werner, had borrowed money to buy implements for working their claims and horses, mules, or oxen to pull the implements.  When the prices for the crops they had counted on to repay the loans fell, they were barely able to make payments of interest, without reducing the principle, month after month--even year after year.  It is not surprising that the second song in the book includes the farmer's hope to "make enough to pay the mortgage off," looking forward to the day "whey that mortgage all is paid" and he can dress his wife "like a queen."
These farmers' organizations were formed to improve farming methods, confront the power of speculators and monopolists, and help each other through hard times.  As tough as times were, farmers still joined in singing "I like to live upon the farm, and breathe the country air; Far from the city's dust and harm, life seems more sweet and fair.  Around me shines the glowing sun, the rains come down in time, and every day there's something done to earn an honest dime."  (Lyrics from "Farm Life")  Unfortunately, in addition to the hardship of debts, farmers also faced drought, when rains did not come down in time. 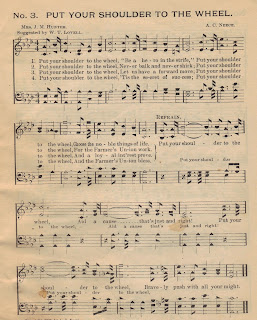 In the late 1800s there were many different farmers' organizations that came together to form the People's Party.  The two predecessors in Isaac's community were the Farmers' Alliance and Union Labor, but in the South a similar organization had been called the Wheel.  Perhaps this had been in the composer's and lyricist's mind when he wrote "Put Your Shoulder to the Wheel."
Many of the farmers' rallies were held out of doors.  In Isaac's community, Neelands Grove was a popular place, and families would arrive with blankets to spread on the ground for picnic lunches, where speakers would deliver inspirational, instructive, or political speeches.  Often there were foot races, wooden dance floors, and sometimes amusement rides of that period--primarily swings.  And usually there was singing, with lyrics of encouragement.  "It is well to work and 'tis well to play when our round of toil is done; then with strength renewed we to tasks return, and life's pleasures are won."  (Lyrics from "Picnic Song")
These farmers were confident that their strength lay in their superior numbers, especially when their organizations became politically active.  They could barely feed their families and were lucky if they could avoid foreclosure on their land, produce, livestock, and equipment.  They certainly lacked the financial resources to confront the wealth and power of men of the Gilded Age.  On the other hand, they greatly outnumbered these steel and railroad tycoons, Wall Street speculators, and monopolists.  Farmers, miners, and laborers believed they could succeed through their votes, if only they worked together.  The lyrics from "Help!" in the image below represent a summary of the abuses they perceived and their method for overcoming them.  (You can click on the image to enlarge for reading.) 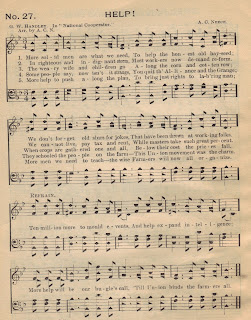 Their plan could only succeed if great numbers of men joined their movement, and the songs often reflect their effort to recruit members.  "The horny handed sons of toil their greeting would extend; We welcome you, dear friends, today, in song our voices blend...Let the music ring!  We, the Farmer's Union, bid you welcome here..."  (Lyrics from "Welcome")  Their optimistic conviction that their movement would prevail is expressed in the final song in the book.  "On the records of our country there shall shine a glowing page; It will be the Farmers' Union of this grand, progressive age.  Come and join the Farmers' Union and its many merits plead; Come and join the Farmers' Union, Union gives the strength we need."  (Lyrics from "Join the Union")
The People's Party had some political success in the 1890s, and members were pulled from both the major political parties, although primarily from the Democrats in Isaac's community.  Although the People's Party faded, many of their progressive goals were gradually adopted by the mainstream politicians and remain entrenched in present-day laws.

And their efforts like those before and since, came to nothing. And yet hope springs eternal...

I wouldn't say their efforts came to nothing. I would agree that the economic imbalance farmers and laborers fought against during the Gilded Age is an ongoing struggle yet to be resolved. As for Isaac and his fellow farmers, they did learn from each other, they helped each other as best they could afford, and they kept each other's spirits up. And, many of their progressive political goals were adopted by the two major parties and are taken for granted by Americans today. But yes, some things linger generation after generation...

Thanks for the interesting story, Lynn.

I understand Allen's sentiment. We have seen farmers and farmers' policies thoroughly beaten down in the last 20 years or so, as governments listen more and more to the speculators.