What do I do with my crop? (Storing Grain, Part I) 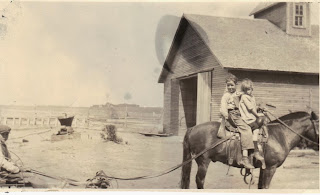 Ask the typical city dweller to define elevator and he or she will probably say it is a conveyance to lift passengers to the top of tall buildings.  Ask a farmer, and he or she will explain it is a place to store grain.  However, granaries and elevators have changed a great deal since Isaac's time.

Isaac stored grain many different ways.  For example, he partitioned his hennery to use one side to store corn. You can see Isaac's design for a new hennery at "Isaac Raises Chicks with a Broody  Hen," 8-29-2013.  At one point, when all his other storage was full, he used the bed of his wagon for several days.  He also built a small wooden granary to hold his wheat and corn, but he definitely resorted to storing grains and other produce in his house as well.  On February 4, 1891, he wrote in his journal:  "...found it necessary for safety sake to place extra prop under 2d floor of my basement to avoid maybe an unexpected 2d rate funeral, too much seed corn & trash overhead."  I love his little joke with himself about the risk of his house falling in on top of him from the weight of too many barrels and sacks of grain.

Sacks and barrels were the common means of transporting and storing grain in early times, and the slow and labor intensive job of loading wagons and boats took days and weeks, not to mention much sweat and many aching backs.

The photograph at the top of this blog was taken in the early 1920s at my Grandfather Beck's farm.  My father is the boy on the horse, riding with his sister Merle and pulling his brother Arthur.  In the background is the granary.  Notice the cupola on the roof.  That granary, minus the cupola, remained on the farm until my father's death. 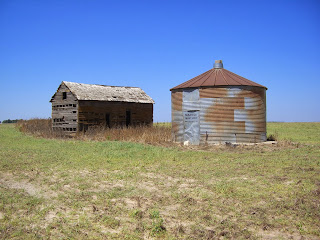 Although wooden granaries continued to be used, round metal grain bins gradually replaced them, offering more protection against rodents and weather.  When I paused to photograph the aging wooden and metal structures at right, standing side-by-side in a field, I found that the wooden building had a partition in the middle with no door between the two sides.  I concluded that it was used as a granary, especially because of the door in the gable end.  The two structures are an interesting example of a wooden granary standing side-by-side with the metal bin that replaced it.

Next week's blog will continue to share ways grain has been stored over the years.