Mowing on the Prairie 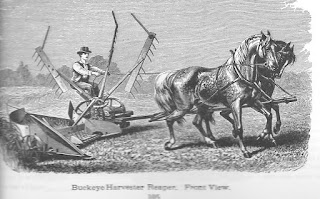 Recently I purchased a reproduction of the Asher & Adams Pictorial Album of American Industry, published originally in 1876 and reproduced in 1976.  Since Isaac B. Werner came to Kansas to stake his claims in 1878, the illustrations of "American Industry" in this book represent the state of equipment near the time of his arrival.

Two differences seem apparent to me.  First, the images in this book show state-of-the-art, top-of-the-line equipment.  Second, the publisher in 1876 was a New York state business, and the images depict buildings, equipment, and decorations more common in the settled eastern parts of America.

Isaac B. Werner was in no financial position to buy state-of-the-art, top-of-the-line equipment.  In fact, the images of mowers shown in this blog were far different from what Isaac used in 1878 when he began mowing the tough prairie hay.  He did not own a horse for eight years, and a 2-horse mower would have been quite a luxury.  He did his mowing by hand with a sythe. 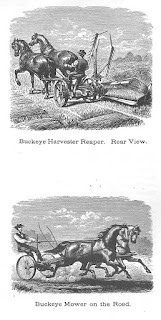 Mowing was very important in those early years of settlement, not only for harvesting crops but also for defending against prairie fires.  Plowing fire breaks was very difficult because of the deep, stubborn roots, so instead, settlers mowed the prairie grass to reduce the risk of fire racing across the land, fueled by the tall, dry grass.

Until Isaac acquired his horse, Dolly Varden, he was dependent on neighbors keeping the grass mowed along the boundary of his claims.  The importance of having his own horse to mow for greater safety was as significant to Isaac as having a horse to use in his fields.  Raising crops was dependent on protecting them from fire just as it was on the weather, and while Isaac could do little about the weather, he could mow to minimize the risk of fires.

He wrote in his journal about mowing a path from his homestead to the Emerson school to avoid wet feet and legs when walking to the school through the grass to attend meetings.  He was not the only settler to do this, as a friend, Bob Moore, told me that his family oral history includes the story of his ancestor, who was a contemporary of Isaac, mowing from his claim all the way to Iuka to clear a path for more pleasant walking.

Let me know if you enjoy these images, and I will share more in the future.
Posted by Lynda Beck Fenwick at 11:15 PM

Mowing a firebreak is a new one to me but it makes sense. The scythe is still a common mowing tool in the villages here as people cannot afford equipment for one or two cows or goats. When my grandfather immigrated to Saskatchewan in 1906 the closest firewood was 30 miles away. As farms filled in, the great sweeping prairie fires came to an end and within a few decades every low spot had poplar and willow trees growing in them.
The reaper in your pictures looks like a McCormick type. At Pereyaslav Khmelnitsky, about 80 km SE of Kyiv, there is an outdoor architectural museum which contains several other smaller museums including a Wheat Museum. One of the implements on display is a McCormick reaper knock off that was built as late as 1944. Russia/USSR was isolated from the world by distance, culture and by politics. In many ways they are still having to reinvent the wheel.

Enjoyed your comment! According to the album from which the image was taken, this mower is a "Buckeye New Model Mower." It was manufactured by Adriance, Platt & Co., 165 Greenwich St., New York, with the "Manufactory" in Poughkeepsie, N.Y. The pair of images in the lower portion of the blog were from the same company, the top image being a Buckeye Harvester Reaper (rear view) and the bottom image being the "Buckeye Mower on the Road."