However, I had the opportunity to examine the records of one Stafford County country school--records that dated from 1885 to 1940--and they provided an interesting glimpse of a specific community.  Naturally, I was particularly interested in the early records which covered the time period during which Isaac Werner helped build District 33, Emerson School in Stafford Co., KS and attended various community meetings in the school.

The records I examined were of School District 57, in Stafford County, Kansas, Township 24, Range 15, sections 19, 20, 30, 29, half of 28, 31, 32, half of 33, 6, 5, and half of 4.  School District 57 was located just a few miles southwest of Macksville.
Today's students travel miles to reach school, but before there were buses and cars that could cover long distances quickly, schools were located nearby the families they served.  District 57 served 8 full sections and 3 half sections, drawing its students from 9 1/2 square miles. 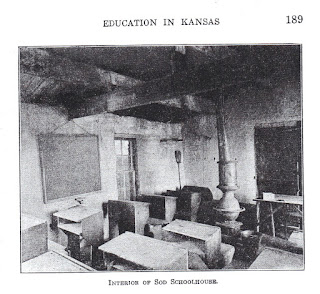 The Clerk's Record for District 57 states that the school district was formed May 9, 1885, notices having been posted April 28, 1885.  At the first district meeting on May 9, 1885 the following officers were elected:  R. T. Anderson, Director; J. L. Carter, Treasurer; and C. E. Seibert, Clerk.
As I have mentioned in previous blogs describing early country schools, children were needed to help with the farm during busy planting, hoeing, watering, and harvesting seasons, so school was conducted during a Fall Term after harvest and a Spring Term prior to planting.  Unfortunately, the school terms occurred during months of more severe weather, which may account for some of the absences I observed in the attendance records.

Eight family surnames were represented among the 1887 Fall Term and 1888 Spring Term at District 57.  Among the 16 students, ages ranged from 5 to 15.  The teacher's method of keeping attendance was confusing, with classes in September, October, and November, but possibly December as well, as there appeared to have been a total of 95 days of instruction.  The same students are listed for the Spring Term, although one 14-year-old boy who did not attend in the fall attended spring classes and entries were made for an unnamed student.  Classes ended May 11, 1888, with a total of 60 days of instruction.  Twelve children had perfect attendance, but 4 boys missed more than 20 days, perhaps at the end of the term when they were needed to work in the fields.

Through 1888 the teachers' salaries were $30 a month, except for the last teacher, who received $32.50.  In 1889 the salary reverted to $30, but 1891-1894 the salary was $35 a month.  The Annual Statistical Report posted in another part of the Record indicates that there was no difference between salaries of female and male teachers over those years reported.

Lumber for the school house was $198 + 30; freight on the school furniture was $27.88; digging the well was $12.50 and the pump was $8.50; the stove and fixtures were $19.10; and plastering the school walls was $49.50.  Charges for coal were $5.50 a half ton.  One expense that stood out as a significant measure of the community's respect for the children's education was $12.50 for a Dictionary!  While these amounts may seem small today, this was a huge expenditure for so few families to share in such hard times.

It was fun browsing through the records of one community's commitment to the future of their children.  I hope you enjoyed looking back about a century and a quarter with me.
Posted by Lynda Beck Fenwick at 8:45 AM