It is true that the Home on the Range Cabin is a bit in the middle of nowhere, but somewhere isn't far away.  From Smith Center, Kansas, where we had spent the weekend, it was only about a fifteen minute drive on well paved roads except for a very short drive on well-packed dirt.  Department of Tourism signs marked the way until we reached the last turn-off, and an impressive stone sign could be seen well in advance of the turn-off.

Even if there were no particular destination it would be a nice drive through the rolling hills and valleys of northermost Kansas.  A double row of dry corn stalks along both sides of a fence stood like sentries atop a hill as we entered the dirt road.  As we gradually dropped down toward the river valley through which West Beaver Creek wanders, we saw an old bridge, now useful for hikers crossing the creek but once used by vehicles on a now-abandoned county road. 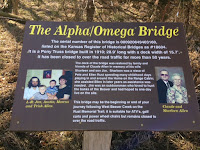 One more curve and we pulled into the parking area for Higley's "Home on the Range" Cabin.  If you missed last week's blog post you may want to continue reading the blog post about the cabin which follows below.  The cabin sits above a meadow next to West Beaver Creek.  Mark McClain explained to us when he showed us the grounds that time had change the course of the creek, so it was not exactly where it might have been in Dr. Higley's day, but the feeling of his nearly hidden home along the creek remains. 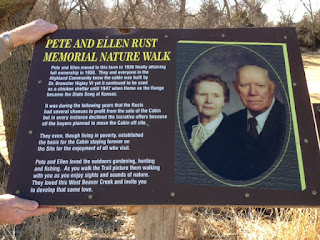 This special place was saved for future generations by Pete and Ellen Rust, who farmed the land from 1936 until Pete's death in 1986.  After his death, Ellen made plans for preserving this important piece of Kansas history through a trust.  Funds were raise for the restoration of the cabin (See Dr. Higley's Cabin, 2-9-2017 below.), and after the restoration was complete, the property was conveyed to a nonprofit organization.  The cabin and its 240 acres are owned and managed according to the terms of the trust Ellen established.

Plans for bridges, hiking and biking trails, and a natural amphitheater just south of the cabin were underway before Mother Nature caused some interruptions with flooding.  The plans, developed with the guidance of a landscape architect, remain the same, including concerts and other events onsite, as well as activities for young people, such as boy scouts and 4-H groups.

Unlike the Ellen Rust Living Trust initially  established, the transfer to the People's Heartland Foundation as a 501 (c) (3) charity can exist into perpetuity and can also accept tax-deductible contributions from future donors.  This allows planning to extent far into the future, and members of the community and groups wishing to utilize the property are encouraged to participate in the planning with their ideas.  Volunteers willing to help stay ahead of Mother Nature are also welcome. 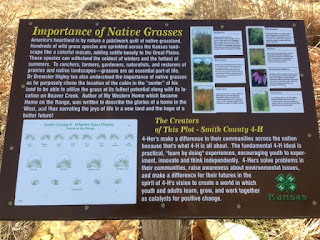 4-Hers have already contributed to the hiking trail with their Native Grasses Project.

Next week's blog will share more about what one man's dream can become when I blog about Lone Chimney Films, producer of "Home on the Range, The Story of America's Iconic Song." 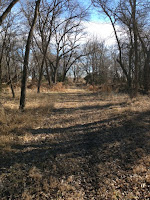 Remember, the images can be enlarged by clicking on them!
Posted by Lynda Beck Fenwick at 7:19 AM

You have given me several new ideas for weekend road trips! Thanks for sharing this, Lyn.

There is renewed interest in Western Canada, too, in native grasses in ecologically sustainable mixes, rather than monoculture or even mixtures of domestic grasses (of East European or Asian Steppe origin.