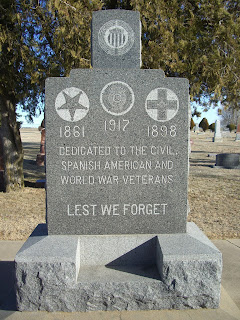 I have written about the traditions of our community on Memorial Day in other blogs posted in late May or early June, and I am writing this blog in the evening after attending the 2017 Memorial Ceremony in our hometown.

My husband marches in the honor guard, so we arrive early so he can assemble with the other marchers, and I use the time to make a complete circuit of the graves of all of our ancestors and many of our friends.  It is a route learned when I was very young and the original part of the cemetery had many flowers decorating the graves.  Today, only a few in that section had flowers, their descendants having joined them in their final rest, or members of their families no longer living in the area. 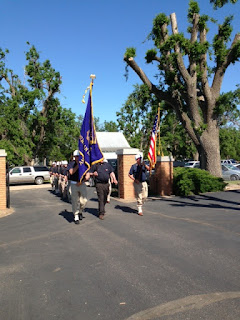 Most people now decorate graves of parents and friends in the newer sections of the cemetery.  Even the open lawn purchased for expansion has gradually acquired gravestones.  For people like me, with ancestors that came to Kansas as homesteaders in the late 1870s and 1880s, several generations are buried in Farmington Cemetery.  Among those in the community who have carried on  family farms, more generations are likely to follow. 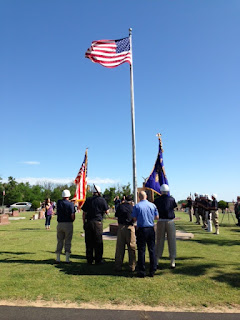 The Memorial Day Services are conducted at the 'new' monument near the west gates, but it is the second Memorial Monument in the cemetery.  The original  monument honored soldiers, sailors, and marines of the "Civil, Spanish-American, and World War.'  Remember, W.W. I was believed to be 'the war to end all wars,' and it was not called W.W. I until there was a W.W. II.

When my husband began marching in the honor guard, there were several W.W. II veterans among the marchers, and the Vietnam veterans were the 'young guys.'  Gradually the W.W. II veterans became the ones being honored in the memorial ceremony, and the Vietnam veterans became the marchers with gray in their hair.  With our current all volunteer military, there are fewer young veterans in our community to carry on the tradition. 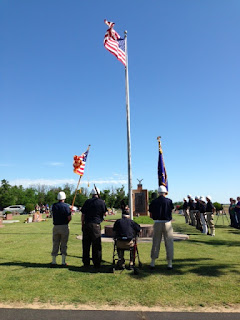 As I walked the cemetery I thought about all of the people I had known who are now buried there, and since I have spent so much time with Isaac's neighbors as I researched the late 1800s described in his journal, I have come to feel as if I know many of that generation who are buried in Farmington, their stones in the section of the cemetery where three sets of my great grandparents are buried.

However, perhaps what I recall most from the 2017 Memorial Ceremony was the participation of the two remaining W.W. II soldiers that once marched with other veterans their age. Although they no longer march, they still participate.  One delivers the familiar lines promising that although the flowers placed on their graves will fade, the veterans being honored will not be forgotten.

The other W.W. II veteran marched last year, although for the first time he did not carry a rifle.  This year he was not able to march, but he waited at the Memorial and joined the other marchers to stand between the flag bearers, supported by a helpful arm.  As determined as he was to stand, the ceremony was long, and he needed his wheel chair.  Yet, he remained with the other veterans, doing his part as best he could.  That is what moved me.  Every one of those men, (and this year, a female service member) was there because he or she saw it as their duty to serve.  They had served their country when the call came, and today they came when they were called to march in honor of those with whom they had served and generations of veterans before them.  It made me proud.

(Remember, you can click on the images to enlarge.)
Posted by Lynda Beck Fenwick at 8:51 AM