History and the Economy 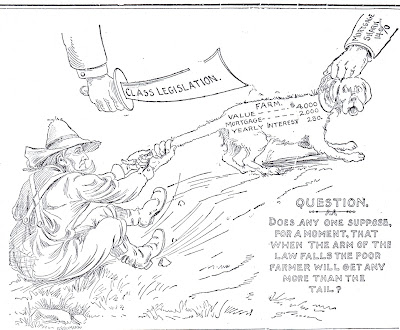 As this blog has always made clear, the things that fascinate me about history are the lessons history has for the present.  I believe that sharing the story of Isaac Werner, his community, and their connection with the Populist Movement of their time has lessons for our own time.  The trick is, of course, understanding how to apply those lessons.

This blog post contains cartoons published in the County Capital in St. John, the newspaper to which Isaac subscribed.  Remember, you can click on the images to enlarge them.

Then, as now, sometimes politics causes all of us to avoid conversations with each other, and I hope you don't stop reading because you think I am about to express political opinions.  I'm not.  The three men I quote in this post are not politicians, and what they are urging is the importance of getting politics out of the way to solve issues important to all of us--issues that were important to Isaac's generation and which never seem to go away.

An article published July 18, 2018 in USA Today reported on a meeting at the Brookings Institution in Washington, D.C. at which Former Fed Chairman Ben Bernake and former Treasury Secretaries Henry Paulson and Timothy Geithner spoke to reporters.  They focused on the reforms enacted in the wake of the banking and housing meltdown in 2008, a financial situation inherited by the new, incoming administration, which came dangerously close to collapsing the global economic system and bringing America down with everyone else.

That history is only a decade ago, but as I grow older I realize that what seems recent to me is ancient history to a significant part of the population, and how short some of our memories are!  One of the concerns expressed by these three men was whether today's political climate would allow the bipartisan action that confronted the economic crisis in 2008. 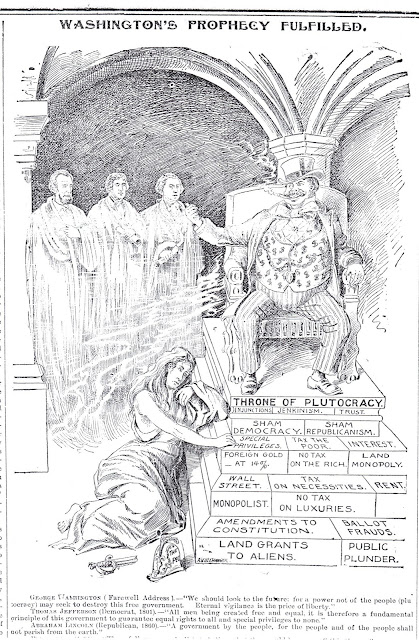 Politics and the economy were a divisive combination in Isaac Werner's time as well, as the political cartoons from the 1890s show.  The issues printed on the steps leading up to the "Throne of Plutocracy" in the cartoon above describe some of the same issues of today.

The point the three men sought to make in their press conference was that the current drop in unemployment and other positive economic trends should not create such a sense of economic security that we ignore long term issues. 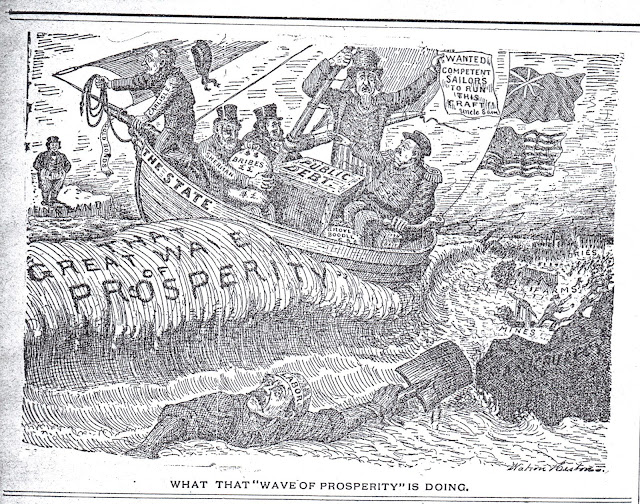 "Today, when we are growing, this is the time when we need to deal with some of the persistent structural issues that are going to determine our long-term economic competitiveness," Paulson said.  "We have the fiscal deficit, dealing with immigration, the income disparity and what automation and globalization are doing to wages.  They need to deal with all those."

Reading the USA Today article I could not help but compare the issues portrayed in the old cartoons with the issues concerning Bernanke, Paulson, and Geithner, men who are not politicians and who served under Republicans and Democrats.

In the above cartoon, notice what is in threat of being submerged by the Wave of Prosperity, as Uncle Sam waves a sign reading "Wanted:  Competent sailors to run this craft."  The weight of "Public Debt" overloads the "Ship of State," and foundering in the water are "Labor," "Farms," and "Factories."

As this blog has often said, we can avoid mistakes if we learn from history.  The challenge always remains, however, just how to interpret those lessons.