The Importance of Weather 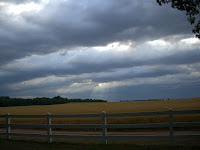 Every day, Isaac B. Werner recorded the weather in his journal--the temperature, the rainfall, the condition of his crops.  As a farmer, he followed the markets, relying on trips to town or reports from neighbors, having no radio, television, or internet to check for the latest reports.  Neither did he have a local weather man or woman to advise him of projected changes in the weather nor NOAA to warn him of approaching severe weather. 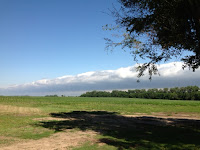 What he did have, however, were folk sayings and a keen sense of observation with which to make his own weather predictions.  "Red sky in the morning, sailors take warning."  He learned the signs of his region and was constantly alert.  After seeing his first tornado, like a sock hanging down from the clouds, he became more watchful of cloud formations like the ones from which the sock-shape had developed, better understanding what had preceded the tornado that touched down and darkened with the dirt it carried upward as he watched. He consulted his journal entries to observe weather patterns from year to year, and bought the pamphlets containing not only weather predictions but also solar and lunar events.  He also corresponded with Professor Shelton at Kansas State College, Director of the first Experimental Station, and he subscribed to farming journals. 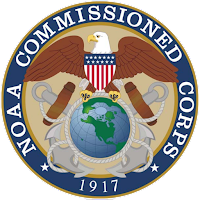 Today we have so many sources of information, and most important is the National Oceanic and Atmospheric Administration, founded October 3, 1970 by President Richard Nixon within the Department of Commerce.  In the words of President Nixon, by bringing earlier scientific agencies within the government together, it would provide "better protection of life and property from natural hazards  ...for a better understanding of the total environment...[and] for exploration and development leading to the intelligent use of our marine resources."  The need for such information and intelligent use of resources was recognized early, and agencies to achieve those goals were among some of the oldest in our federal government, for example:  United States Coast and Geodetic Survey, 1807; Weather Bureau of the United States, 1870; Bureau of Commercial Fisheries (research fleet) 1871; Coast and Geodetic Survey Corps, 1917. 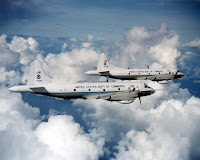 The breadth of essential responsibilities under the umbrella of NOAA is remarkable and, I suspect, largely under appreciated by most of us.  At a cost of about $3 per person, the following services exist:  Weather Service; Ocean Service; Environmental Satellite, Data, and Information Service; Marine Fisheries Service; Oceanic and Atmospheric Research; Marine and Aviation Operations; Geodetic Survey; Integrated Drought Information System; NOAA Commissioned Corps; and Intergovernmental Panel on Climate Change.

Walt Whitman (1819-1892), who was living throughout Isaac Werner's entire life, wrote in his book Specimen Days under the heading 'Nature And Democracy--Mortality', "American Democracy, in its myriad personalities, in factories, work-shops, stores, offices--through the dense streets and houses of cities, and all their manifold sophisticated life--must either be fibred, vitalized, by regular contact with out-door light and air and growths, farm-scenes, animals, fields, trees, birds, sun-warmth and free skies, or it will morbidly dwindle and pale.  We cannot have grand races of mechanics, work people, and commonalty, (the only specific purpose of America,) on any less terms."

During a very dry season, when farmers desperately needed rain, I was in the local Wal-Mart when a woman came running into the store, proclaiming loudly in disgust to everyone close enough to hear, "I just got my hair done and this rain is spoiling it."  The economy of our community is based almost entirely on agriculture and ranching, and whether this woman lived in town or not, her family's livelihood was probably dependent on farms and ranches surrounding the town.  Yet, she seemed unaware of the need for the rain she found so unwanted because it spoiled her freshly styled hair.

Whitman was right.  Isaac Werner and those early settlers knew the importance of those things under the umbrella of NOAA today, but those who have lived their lives in cities may forget how essential all of that is.  Perhaps even some of us who live in the country may fail to reflect on the importance of all the interconnected responsibilities "for a better understanding of the total environment" as described by President Nixon.  The flooding and wildfires may be making more Americans aware of that.

Remember, you can click on the images to enlarge them.

Posted by Lynda Beck Fenwick at 7:05 AM