"There isn't such a thing as being happy.  You can be happy for a moment.  Happiness is something that goes like the wind.  Being interested can last longer."  Georgia O'Keeffe

During a recent trip to Santa Fe, New Mexico we visited the Georgia O'Keeffe Museum.  I was very surprised to realize that the lives of O'Keeffe and Isaac Werner overlapped by eight years.  Although she began painting at a very young age, Isaac would not have seen her work, for she was still a child when he died; yet, it is always interesting to me to place Isaac in the historic period of his lifetime, and I would not have thought that this artist, whose way of seeing and painting in such a modern way, would have been born while Isaac Werner was living.

When interviewed about her popularity, O'Keeffe said she believed her work was "in touch with my times so people have liked it."  What she considered "my times" was a considerable number of years, since she was born in 1887 and died in 1986, a lifetime spanning nearly a century.  When O'Keeffe was born, Isaac had finally acquired a horse,  able to plow his Kansas claims one row at a time and ride to town rather than having to walk there.  Both were born in rural environments, his in Kansas, and O'keeffe's in Wisconsin.


For his times, Isaac had an extended education, still in school at age 17.  When he left home it was to travel westward to the frontier.  O'Keeffe, on the other hand, at about the same age, left home to study at the Art Institute of Chicago for a year, then the Art Students League in New York, and later a very influential summer course at the University of Virginia.  Both adventuresome, their destinies pulled them in opposite directions.  Isaac's adult life was lived in the West, first Illinois and finally Kansas; O'Keeffe studied and taught in the East and the South, but she too was eventually pulled westward to teach in Texas.  By 1915 she had realized that her artistic vision was different, "...shapes and ideas so familiar to me that it hadn't occurred to me to put them down."  Still in her early twenties, she began experimenting with highly abstract drawings.

Her work was brought to the attention of Stieglitz, a photographer and gallery owner in NYC, who exhibited her work.  Their professional relationship deepened, and they married in 1924.  During this time her abstract skyscraper paintings became popular.  Her first visit to Northern New Mexico was in 1929, and that began her annual painting pilgrimages to New Mexico while continuing to live in NYC with her husband.  Three years after his death, she made New Mexico her permanent home in 1949.  Ultimately, she had been pulled even further to the West than Isaac.  She once said, "It takes courage to be a painter.  I always felt like I was walking on the edge of a knife."  One example of her interest in atypical subjects was her fascination with bones, which she both collected and painted. 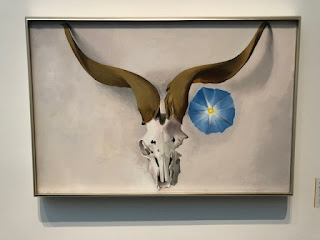 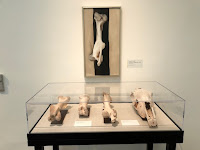 Her life evidences that courage, not only in committing to the abstract form and unique subjects for which she is known, but also in her life with Stieglitz and her nomadic living arrangements.  As another proof of her determination and courage, O'Keeffe suffered from Macular Degeneration and gradually lost her sight.  Yet, she continued to paint, by describing in detail to her assistant Juan Hamilton the dimensions of the painting and the colors from specific color formulas she had documented before her blindness. Her will to create from what she saw in her mind even after complete blindness continued until two years before her death, and she also produced objects in clay.  The beauty in things most of us ignore were preserved in her mind, even after her sight was taken from her. 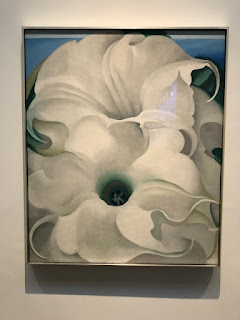 Isaac Werner was not an artist, but he also envisioned a different life and had the courage to travel West to find it.  He did not paint canvases, but his creative mind could not endure a badly designed object without setting out to improve it or design something to replace it.  Both O'Keeffe and Isaac could see things and imagine them in a different way--O'Keeffe's art and lifestyle and Isaac's inventions and populist/progressive ideas.

You may click on the images to enlarge.  Permission for photographs at the museum was allowed unless labeled otherwise; however, these images were taken only for use in this blog.  Please do not copy or reproduce.

Instead, plan a visit to Santa Fe to enjoy the pleasure of viewing O'Keeffe's original paintings for yourself.  You will love seeing them!

Posted by Lynda Beck Fenwick at 8:42 AM

Thanks for another great post, Lyn. While I have enjoyed, O'Keeffe's paintings and photographs over the year, I was not aware of her work after becoming blind. Love this blog because I always learn something new!