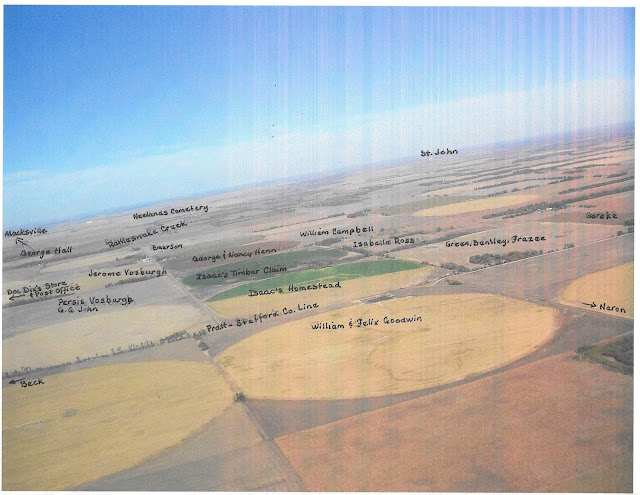 The photograph above was taken fairly recently from the air and shows Isaac Werner's Homestead and Timber Claim near the center and the surrounding claims of his neighbors.  You may be surprised to see how few trees there are--even less today than there were in Isaac's time when settlers worked very hard to plant and protect trees.  What you may also notice is the absence of fences, something that present farmers have in common with early settlers.

Very early settlers grazed sheep on the open prairie, but as others arrived to claim homesteads and plant trees, open range was no longer available.  However, as settlers with livestock faced several dry seasons and money became scarce, many failed to raise feed for their livestock and lacked money to buy feed.  They felt they had no choice but to release the animals to forage for themselves.  Unfortunately, the hungry animals found food wherever they could.

Isaac recorded in his journal having to go to St. John to buy fencing materials to put around his own hay stacks to keep the foraging cattle and horses of his neighbors from eating what he had raised for his own horses.  He also complained about a neighbor's hogs rutting up a planted field in search of potatoes overlooked during the past potato harvest.

Our farming neighbors with livestock fence their pastures and feed yards today, but I thought you might enjoy seeing some of our unexpected guests (or evidence of their visit) during the past summer.

Yes, I know that there may be some of you who regard our seeing three young bears in 2017 as a misidentification, even with photographs of tracks and scat.  This year we did not see a bear, but for about a week or more we found what several people have identified as bear scat in our lawn nearly every morning.  It was the height of mulberry season, and our pasture has many mulberry trees.

Equally unusual but more easily explained was the herd of buffalo that grazed through our yard.  Because we knew a new couple in the neighborhood had buffalo, it wasn't a complete shock to see them, apparently having escaped through a breach in their pasture fence.  They lingered on our property briefly before moving on.

My husband moved closer and got a better picture of the buffalo, but I chose my photo taken from the yard so that our landscaping would indicate just how close our unexpected guests were.  Our cat likes to keep watch out of the window that overlooks this mowed pasture, and although he is accustomed to various wildlife, he seemed rather perplexed by the buffalo.  Our south pasture had two definite buffalo wallows when I was a girl, but I suspect it had been a very long time since buffalo had been on our farm.

Our most recent unexpected guest surprised me one morning as I stepped out the door onto our porch.  She seemed to like our Burmuda grass lawn very well, although the mosquitos  were abusing her.  My husband began calling neighbors that we knew had horses, and it wasn't long before her family came to get her.

The buffalo were gone by the time Isaac Werner was keeping his journal, and bears in this community were never mentioned by Isaac, nor by any of my ancestors.  But horses were found on most homesteads.  Isaac struggled without a horse for almost ten years until he finally bought a mare he named Dolly Varden, the name of a woman in a Charles Dickens novel who dressed in colorful clothing.   He did not describe her coloring in his journal, but his choice of name seemed to me to indicate a more colorful coat.  This beautiful horse is named Jewels (or Jules), and we both enjoyed her visit.

We are accustomed to many four-legged visitors--raccoons, badgers, deer, skunks, squirrels, rabbits, opossum, coyotes, armadillos, even cougars and bobcats, but we did see a few unusual visitors this year, and I hope you enjoyed meeting our atypical guests!

In writing my manuscript, I have been very strict with myself about documenting details.  If I could not confirm from Isaac's journal or local newspapers or other documentation that specific birds, animals, and plants existed at that time, I did not include references to them in the manuscript.  In my own lifetime I have seen many changes.  There are fewer birds and lightning bugs today, although they were abundant in my childhood.  Other animals, like deer and armadillos, that were unheard of are now prevalent.  Although Isaac's main crops were corn and potatoes, they were replaced by my father's generation with wheat and milo.  Now corn is a regular crop, there is a large commercial potato operation near our farm, and cotton is gaining acreage.  One thing is certain and that is change.  It is the responsibility and challenge of every generation to accept the inevitability of change while having the wisdom to protect what is good from our past.  Nature provides evidence to guide us, as does the record of history.

Remember, you can enlarge the images by clicking on them.
Posted by Lynda Beck Fenwick at 9:39 AM