Words from the Grave

It often surprises me that a favorite quote I interpret to mean one thing is discovered to be a favorite quote of someone else who interprets it to mean something entirely different.  That is why it is essential to place quotes within the full context of their meaning and to understand the historic moments surrounding the speaker.

When Isaac Beckley Werner was born, America was not even a century old, and yet the nation had been tested by a civil war.  America was about at the century mark when Isaac began writing in the journal which inspired my research, writing about the Populist Movement that was so significant in our own state and region of Kansas.

It was a time when political parties formed to confront the two older and more powerful parties, the two parties which dominate our political environment today, and many of our ancestors were participants in this mix of parties.

If you, as I was when I began my research, are unfamiliar with the upstart parties of that era, here is a very brief summary of some of the more successful political challengers:  Green back Party (1874-1889) begun on an agrarian platform to support metal-backed rather than paper money; Social Labor Party (1876-   ) supporting workers rights and unions; Know nothing Party (1845-1860) with concerns about immigration; Readjuster Party (1877-1895) involving both Blacks and Whites in concerns about public education and Civil War debts of the South; Silver Party (1892-1911) focused on bi-mentalism; Independence Party (1905-1911) advocating a Department of Labor and a set work day; Populist or People's Party (1891-1908) particularly involving farmers in our region seeking a party to represent their issues in opposition to the rich and powerful.


As you can see by reading through that list, the issues were mixed, but many of their concerns remain significant today, and, as then, the same two political parties remain predominant.

As James Madison wrote in The Federalist Papers No. 51 regarding the separation of powers of the three branches of government upon which our Constitution is based:  "But the great security against a gradual concentration of the several powers in the same department, consists in giving to those who administer each department of the necessary constitutional means and personal motives to resist encroachment of the others. ...It may be a reflection on human nature, that such devices should be necessary to control the abuses of government. ...If men were angels, no government would be necessary to control the abuses of government. ...In framing a government which is to be administered by men over men, the great difficulty lies in this:  you must first enable the government to control the governed; and in the next place oblige it to control itself."

The amazing wisdom of the founding fathers was to create a constitution in which powers among the three divisions of government--legislature, executive, and judicial--are divided into distinct branches to limit any single one of them to encroach on the functions of the other.  The common reference to this structure is "checks and balances" to prevent unchecked power by any one branch. 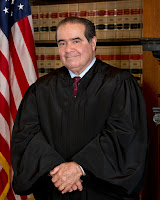 The final voice from the grave whose words I share belong to Supreme Court Justice Antonin Scalia (1936-2016).  In a speech given October 5, 2011, he began by acknowledging that in speaking to groups he would often ask them what they considered the most important thing about our Constitution, and inevitably they would answer "Freedoms," of speech or other freedoms.  He asked instead, "What is it in our Constitution that makes us what we are?" and answered his own question:  "The Bill of Rights is not the greatness of America...The real key to the distinctiveness of America is the structure of our government."  In short, he believed the single most important thing we posses as Americans is a Constitution in which our three branches have limited powers and can act to limit the power of each other.

Justice Scalia believed that we Americans are not aware of how important separation of powers is and that most of us are ignorant of the ways our Constitution differs from the governance of other nations.  He explained that unlike our House and Senate, "[There are] Very few countries in the world that have a bi-cameral legislature...two separate bodies in the legislature equally powerful."  He aimed a joke at legislators present for his speech, acknowledging:  "That's a lot of trouble to get the same language through two different bodies elected in a different fashion."  To citizens who complained to Scalia that the bi-cameral legislatures led to gridlock, he replied, "Learn to love the separation of powers...learn to love the gridlock."  He wanted Americans to understand how the difficulties of getting laws through both the house and the Senate defeats mistaken laws and improves laws that pass.

Scalia also opined on our election of a President, saying, "Very few countries in the world have a separately elected Chief Executive."  He explained that in many countries the Chief Executive simply tells the legislators what to do and they do it, or the legislators tell the Chief Executive what to do and if he doesn't they vote to replace him.  Under our Constitution the President has limited powers, members of the House of Representatives and Senate must act independently and reach agreement, and the justices of the Supreme Court affirmed for life have the final say on the Constitutionality of our laws.

Before leaving the remarks of Justice Scalia, I must mention the importance of differences among the justices with whom they serve.  Scalia and Justice Ruth Banner Ginzburg could not have been more different in many of their legal views; yet, they were the best of friends.  That is difficult to understand for many of us, who know them only through the court opinions that they wrote.  However, it illustrates the importance of the varying perspectives on the Court, which enable them to question the attorneys who appear before them, to argue with each other as the Court reaches its majority opinion, and to write independent opinions in which they express their views beyond the content of the majority opinion--whether they may have agreed with the majority but not their reasoning or whether they disagree in a minority opinion or their own dissenting opinion.  Many Americans are only aware of the majority opinion, but all of these functions are important and necessary in shaping our laws.


Each branch of our government checks and balances the acts of the other branches, and within each branch the ability of differing views to be considered is essential.  As Scalia said, that is what "makes us what we are."

When we Americans and those we elect fail to understand the importance of preserving the intricate checks and balances our founding fathers built into the American Constitution, only then is the greatness of America threatened.

Our ancestors understood that elections matter, and when they believed those they elected had forgotten the responsibility to represent all the people, they formed their own political parties.  Those third parties never have gained much political power for long, and have sometimes unintentionally served as spoilers.  It is also true that many of the populist ideas have now become part of the major parties' values after gaining acceptance of the wider population.  As this blog has often said, history is our best teacher, and those voices from the grave can remind us how precious the Constitution we were given truly is,  We must understand that importance.
Posted by Lynda Beck Fenwick at 8:30 AM