Fun at the Kansas State Fair 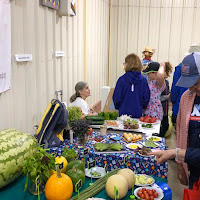 For the second year I went to the Kansas State Fair to participate for two days in the Plein Aire event.  No, I didn't place, but I had a great time!  The weather threatened rain both days, so my selection of where I wanted to set my easel was influenced by that threat. 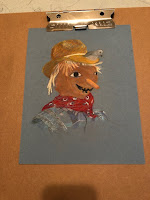 The second day I found a cozy spot as out-of-the-way as possible for a crowded Saturday.  However, I arrived early to sketch the butter cow near the front door, because I knew that once the crowds arrived it would be impossible to see what I was trying to draw. 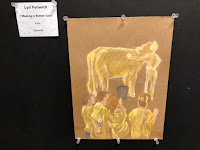 The fun is visiting with people curious about what I am drawing.  People kept peeking around to see how I was drawing the scene in front of me.  Instead, I was working from my sketch of the butter cow scene and some children I added, and they were confused or disappointed by what they saw.  So, with a little time left before entries had to be submitted, I quickly drew the scarecrow with his head made from a gourd so people could see what they expected to see.  Look closely and you can see that scarecrow in the back corner of the photograph above left. 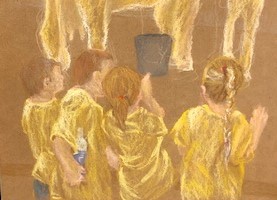 When I sketched the butter cow, the sculpting was in the early stage, and the legs and head were not really shaped.  The tail was skinny, and the human figure was just a 'stick man.'  My sketch looked like what I had seen that morning before the sculptor arrived but nothing like a finished sculpture.  I worried that people might not understand that I had depicted a work in progress. At the last minute I added the butter bucket to indicate that the sculpture was unfinished, but the bucket just looked like a big black square in the center of the picture.  Oh well, I still had fun, but I wish now that I had cropped the picture like I did at left.  I might have even added the sculptor's feet near the bucket to show that the work wasn't finished. 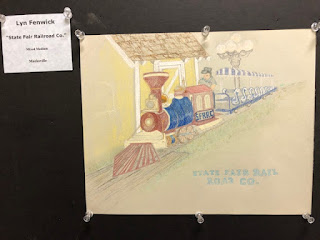 The first day, I took shelter in the gazebo near the train station for a little protection if I needed to pack up quickly in case of rain.  That was a really fun place, since lots of children passed through the gazebo on their way to and from the train, and they loved seeing my train take shape.


I definitely need to improve my plein aire skills, and I need to select subjects more like a still life setup.  With limited time and subjects that don't stand still, I need less ambitious subjects!  The details of the train, drawn in colored pencil, were too time consuming. 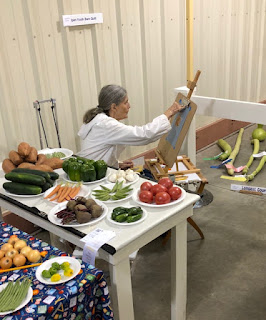 However, the primary objective for having plein aire artists working at numerous locations around the fair grounds is not really about creating your best work.  It is about enjoying being interrupted to talk with people who stop by to watch and ask questions.  It is also about encouraging children to never be afraid to draw, even if they think they can't draw well enough to try.  And, the same thing goes for adults.

I wish I could show you the outstanding work of those plein aire artists that did receive awards for their depictions of the fair, but photographs are not permitted.  When you go to the fair next year, be sure to visit the Oz Building to see all the plein aire entries.  And, if you are a 'Saturday Painter,' consider joining the fun.  You don't have to be a professional to produce your own fair masterpiece and have fun participating.

Remember, you can click on the images to enlarge them.

Posted by Lynda Beck Fenwick at 7:22 AM